More features join the list for the update on February 29th this week. We implemented a completely new Tutorial, added Taverns and Tracking. Taverns are a hub for information and mood management of your men, and tracking allows you to follow or avoid other parties on the worldmap more easily.

More features join the list for the update on February 29th this week. Taverns are a hub for information and mood management of your men, and tracking allows you to follow or avoid other parties on the worldmap more easily. That leaves us with only one more feature left following these that we really want to include in the update, and that’s a better tutorial as you start a new campaign. But for now, let’s take a look at taverns and tracking!

Taverns with the capacity to serve a mercenary company can be found in larger settlements, cities and castles, and the odd small village along trade routes. Laughter can be heard coming from it pretty much around the clock, as it’s one of the few buildings that can be entered both day and night. It’s also the first instance that we’re using small atmospheric images in the UI, as you’ll see below, and the idea is to have a whole bunch of them complement the events in the game as we skin the UI later down the road. 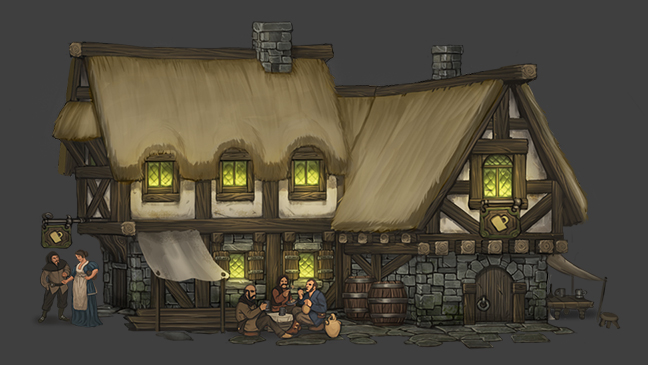 Although taverns aren’t the most critical of buildings, they nevertheless fill with the services they offer what was previously a vacant spot in the world of Battle Brothers. These services revolve heavily around beverages, and they’re talking to the patrons for news and rumors while sharing a beer, and paying a round for your own men in order to get their spirits up. We’ll look at each of them in detail.

As you enter the tavern, you’ll immediately pick up some talk amongst the patrons. What they talk about comes in different categories, and we may add additional useful ones as the game progresses in development. 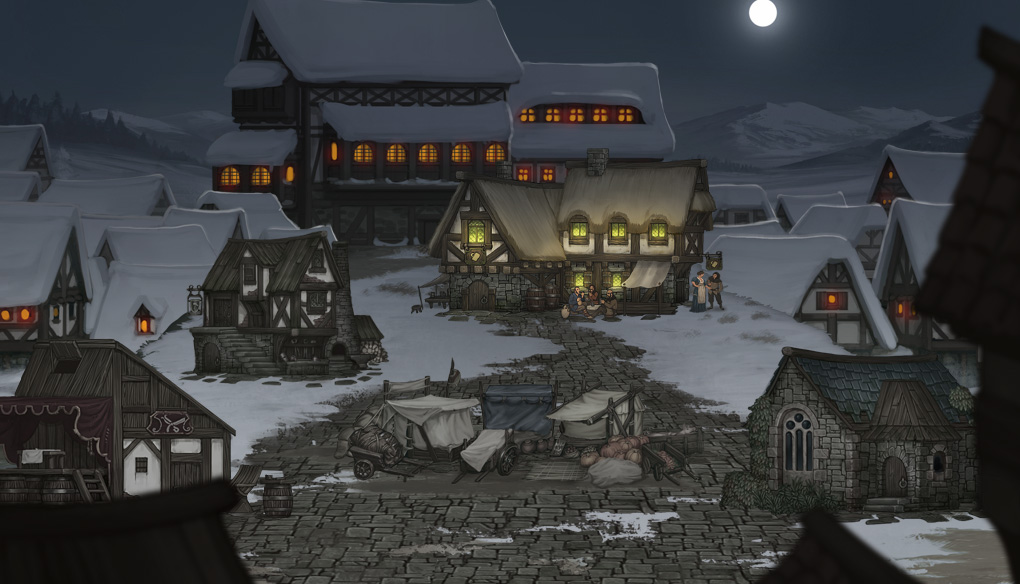 Patrons can talk about potential work for you that they’ve heard about - as the world has become a bit larger now, it’s quite useful to get directions to people that are looking to hire sellswords so that you have a better idea of where to head next.

Patrons can also talk about nearby hidden locations. If you’ve played previous versions of Battle Brothers, you may remember contracts that have you find locations based on vague directions. Those type of contracts aren’t in the game anymore, but that same mechanic is now used for entirely optional locations, potentially full of treasure, you may head out to plunder on your own. The level of directions that individual people can give will differ, so it’s sometimes useful to get directions from several people in order to better pin down where a location might be. You can pay a round for everyone in order to loosen their tongues and have them share more news and rumors with you.

Finally, patrons will also give you flavor responses that tell you more about their situation, the lore of the world and the settlement you’re in, and news about what's happening in the realm. They may also share light gameplay tips, such as soldiers explaining the advantage of high ground or talking about their experience of fighting goblins and how best to approach it. These types of responses depend heavily on where you are, so you’ll more likely be talking with soldiers at castles, and fishermen at fishing villages. We want the world to feel more lively, more lived in, and this is another step towards that goal. 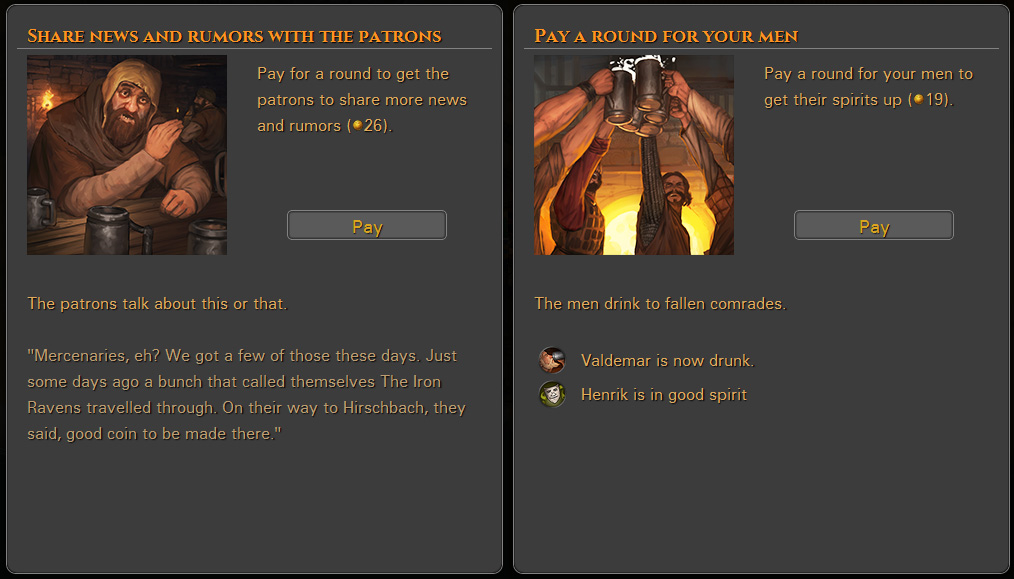 The other service available at taverns is paying a round for your own men. This will generally lift everyone’s spirits and make them forget the horrors of battle for a while, but it comes with its own risk and reward.

Every time you pay a round and the men cheer to different things, there’s a chance that the mood of people improves, but also of them getting drunk. Mood is more important now as we attached additional benefits and penalties to it, and it should become more interesting in general as we do a minor rework of how the mood system works in the future. Being drunk, on the other hand, is a new status effect quite detrimental to combat effectiveness, although it does make people more brave. It doesn’t persist for long, but is succeeded by a hangover, which is a more mild debuff. Whether people get drunk or not heavily depends on their traits. For example, strong and tough characters don’t get drunk easily, whereas tiny and fragile characters do. All this then comes down to the decision of how many rounds you want to spend for your men in order to increase the mood of the company vs. the increasing risk of them getting drunk and being severely handicapped the following day.

All parties now leave tracks for you to follow that look like footprints on the map. Different factions use their own footprints so that you can see at a glance whether it’s humans, orcs or beasts who moved though. Footprints also scale with the size of the party, so you’ll have a rough idea on how many individuals it is that you’re tracking. Note that we’re still experimenting with the visuals right now, so it may end up looking slightly different in the game. 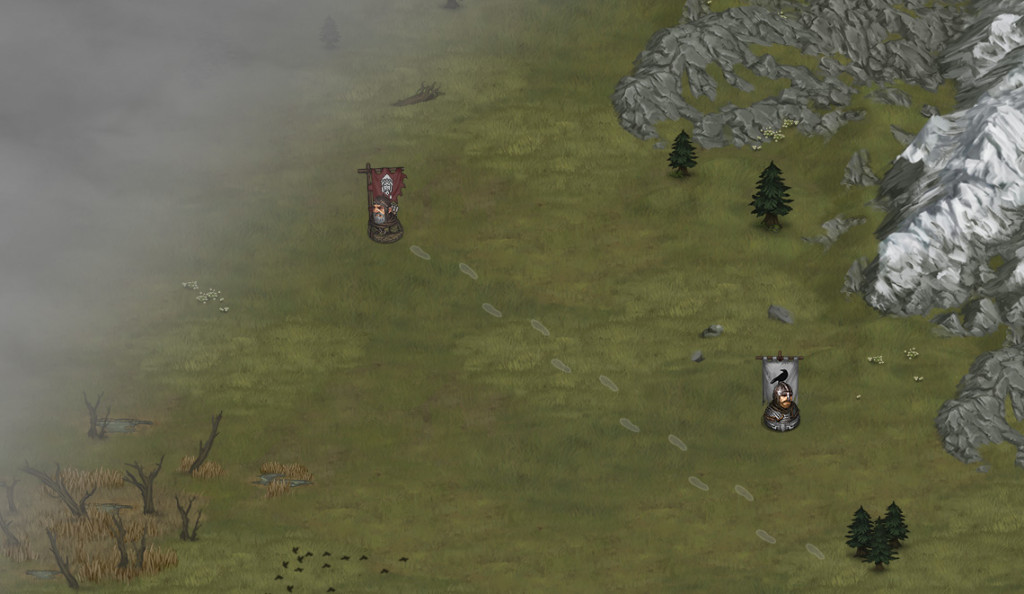 We’re adding the tracking mechanic in order to give you a better idea on what’s happening around the limited radius of vision you have on the worldmap, and to introduce new gameplay opportunities. Even if you lose sight of a party now, you’ll still be able to follow their tracks. You can also potentially follow the tracks of the bandit raiders you just bested back to their camp, and you have more options to both find and avoid parties on the worldmap. Don’t follow large orc or goblin tracks if you aren’t prepared for what lies ahead!

With the finishing line in sight, this will be our last regular progress update before the big update on the 29th. Today we’ll cover some more changes to the game and our reasoning behind them: A new introduction and tutorial, new music and the ability to hire experienced mercenaries.

Over the course of next week, our very own Jaysen will start a new Let’s Play series to showcase and explain all the new features, additions and changes made to the game. But for now, read on!

What's the first thing you're greeted with when starting a new campaign right now? A big wall of text. And then an even bigger one as you pick up the tutorial contract. Being dropped into an open world with little idea of what to do and what the game even allows you to do can be daunting. In fact, the tutorial contract was actually missed by quite a few people in the beginning as they attacked the nearby bandits without hiring a single man, only to get slaughtered. That makes for an odd first impression. What the game needed was a proper introduction that gradually helps the player get into the game and gives context to their role in the world, without being overbearing. 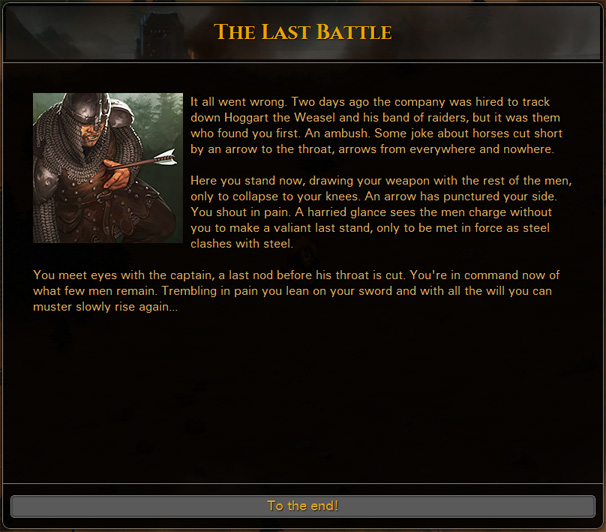 The above is the new very first thing you see when starting a new campaign. This leads into a first battle and a short story about how you end up being the commander of a mercenary company, sets a suitably grim but not hopeless mood, and gives you a tour through the core gameplay loop. It’s presented as a short contract involving several steps and a series of events and dialogs with manageable bits of text and pretty pictures. And it also gives some explanation as to why you aren’t fighting on the battlefield yourself.

During the tutorial the player is introduced to basic combat mechanics without the danger of being instantly slaughtered, learns about hiring new men and buying equipment, camping and repairing, as well as other important aspects. It’s presented as individual characters explaining things and giving their opinions, and it’s all things specific to this game and doesn’t tax your patience with basic stuff like moving the camera. Although we recommend playing through the introduction at least once, it can be skipped after the first few minutes and you’re free to go anywhere in the world you want.

While working on all the new features you’ve read about these past months, our talented musicians from Breakdown Epiphanies haven’t been lazy, either. We’re happy to say that several new music tracks will come with the update, among them one you can listen to right now.

This one is titled the ‘Farm Raiding Battle Track’ and is intended to play when slaughtering peasants and burning down their farmsteads, which is a new thing you may be asked to do with contracts now. It sets a dark and somber mood fitting a scenario like this, and it’s a great track in its own right that will play on various occasions throughout the game - including the very introduction you’ve just learned about.

Here’s a dilemma: Battles are supposed to be deadly and you’re supposed to be losing men every now and then, yet losing men can hurt a lot in the late game because of the difference in power between fresh recruits and veterans, and because it takes a long time to train up again starting from level 1. We’ve talked about an extended roster as a way to cushion the impact of this in the future, but there’s another thing we’re introducing with the upcoming update: Hiring people that come with a few levels already.

Depending on their background, recruits may now come with higher starting levels. Finding a fisherman or farmhand with combat experience is pretty much out of the question. Not so with a raider, a retired soldier or a sellsword. These backgrounds can be found with some or even a lot of combat experience under their belt, but they’ll ask to be paid handsomely for it. It’s generally cheaper to build up people on your own than to hire ready-made veterans, and you won’t be able to afford any higher level hedge knights in the beginning. In order to not take away too much from the progression of characters, the maximum level at which recruits may come is currently at 5, and that’s already only for a select few backgrounds.

You’ll be able to distribute the attribute points and pick perks yourself upon hiring one of the more experienced recruits. By alleviating the severeness of losing an experienced man and having to start with a new one, we’re hopeful that players are more open to living with the consequences of their men dying in battle.

Eager to review this promising game on brandonchovey.net!