Hello folks! Is it June already? Here's what we've accomplished within the last month-

THE SIGNS ARE HERE

Signs of things to come! There’s now two new signs, that draw your eye – making you want to read their contents.

Crippled limbs will now recover over time! Previously, only by being revived or finishing an arena match could restore your limb’s crippled status.

Now, not only are there comfy beds, there’s bedrolls. And they expand when you sleep in them too!

Laying in a bed or sitting in a chair, will result in faster Stamina regeneration rates.

Laying in a bed will also gradually restore your Health (including limb’s Health), finally!

Added a label display in the bottom-right corner. It displays the name of the current operable object (anything you can interact with) that you are looking at. All objects are not yet named, or setup correctly, so there’ll be some funny names until finished.

These windows are on the top floor of all residential buildings in town. They allow you to see out in more directions, but cannot be opened.

Horses now have random colors, so all horses are no longer white. And also, you can select a skin tone when creating your character!

(We still need to separate the eyes from tinting…)

If an attack exceeds a certain “force value” (e.g. standing too close to an explosion), you will be knocked down as a ragdoll – even if your Health isn’t completely depleted. Strength increases this “force value” on your delivered attacks and decreases it from attacks received.

We’ve changed them, yet again! We’ve discovered a free asset and decided to investigate it. Here’s the results: 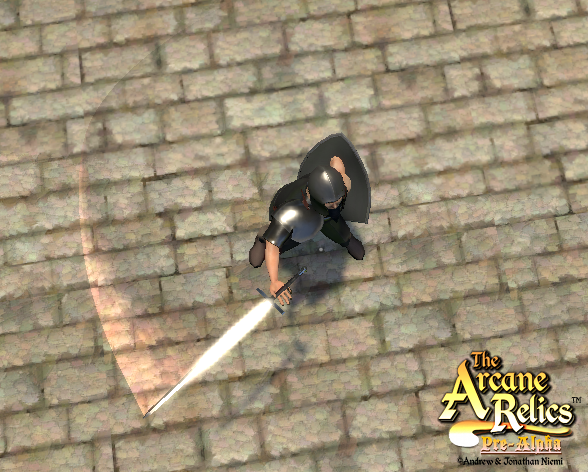 We’ve setup refractions for water and windows! As mentioned earlier, they can be toggled on/off in settings if your computer is old, like ours.

(The blue background fades in and out, in game.)

One thing we noticed when testing The Arcane Relics™ is how easy it can be to overlook the level up message. Currently, navigating through the status menu isn’t the easiest thing either, we have work to do there. Our current solution, a glowing panel that appears behind the in-game HUD when you can level up!