For the past three weeks, we have been busy on numerous things. Here’s the breakdown:

• Input overhaul (pretty much nothing new on the surface, but a necessary improvement):

The primary purposes for this implementation was to have better support for stacked menus and easier support for adding different inputs, since we are still designing some of the controls. For menus, simply pressing the menu button (escape/gamepad start) should close each menu layer starting from the top. Previously, I was doing sort of a swapping system where nothing overlaid but traded places. This was much more tedious and inputs would carry out of menus if not delayed, for example attacking after clicking a ‘done’ button.

-Fixed bug as a result:

-When looting containers the correct menu is selected at first (loot inventory). Previously, the first time opening the menu would always fail and select your own inventory menu. It was a minor inconvenience that would start to become more of a nuisance the more sessions you’d play. 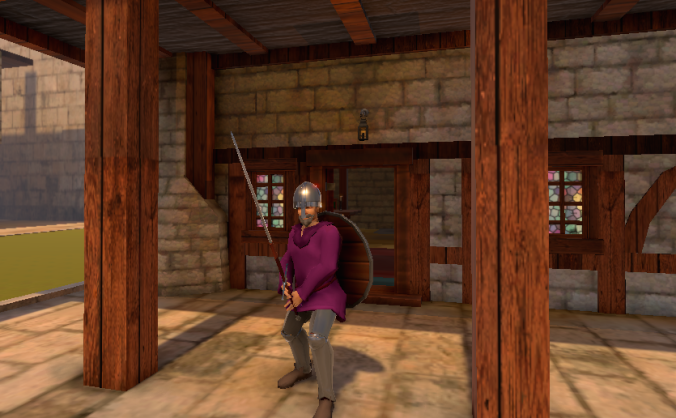 • Progress on the Town:

This includes some buildings within (all WIP), most importantly the stables! There's also a stable boy house (so the groomer can live right close by to their job, without the housing worries).

• A recreated Blend Shapes system to help reduce the amount of clipping between equip instances.

For blend shapes, we’ve setup the tunic, pants, and gambesons to morph based on equipped armor pieces. Take a look:

And in conclusion, we leave you with some screenshots:

Have a great weekend and just a friendly reminder, you can vote for us on Steam Greenlight. (: