More information on the upcoming RPG set in Ancient India.

Before Ranveer, the Temple of Bali was just one of thirty other places of worship lining the ancient byways of the Street of Faith. The last things it would have been associated with would be dynamism and political interest. Its hierarchy was known to be insular, even petrified, and the trickle of novices entering the order had little aspiration of climbing the ranks or even making much of a difference in the world. The temple's needs, goals, and aims were all perfectly simple.

The order’s ledgers record that Ranveer was initiated as a novice just before his fifteenth birthday. For the next two years there exist no more mentions of him apart from his monthly affirmations, his chore postings, and a one-sentence evaluation written when he became a candidate for ascension: “Ranveer is a thoughtful boy, diligent but without motivation.”

The first mention of his Vision was a non-committal note in the novice master’s diaries. “One of the novices claims to have spoken Bali,” it reads. “The young man is to speak with the chairpriests after his week’s duties are concluded.” One week after that, a request with Ranveer to be allowed to teach the ways of Bali to the common people was lodged and approved.

Three years later, Ranveer was High Priest. The entire upper hierarchy had been stripped away, man by man, and replaced with priests, novices, and even uninitiated of his own choosing. Whatever his Vision demanded, things were made just so.

The words Ranveer carried from his conversations with Bali were exactly what people had been waiting to hear. Thousands gathered to listen whenever he spoke. A new courtyard had to be built; a straightforward task, as much of the neighboring temples stood empty and had already been razed to the ground.

In Ranveer's new courtyard was built a statue of a a priest, dressed in the robes of the order, treading on a snake.

A set of work-in-progress sprites from the game. Ranveer stands fifth from the right.


Diary of a Bhimra Spy, Part 2 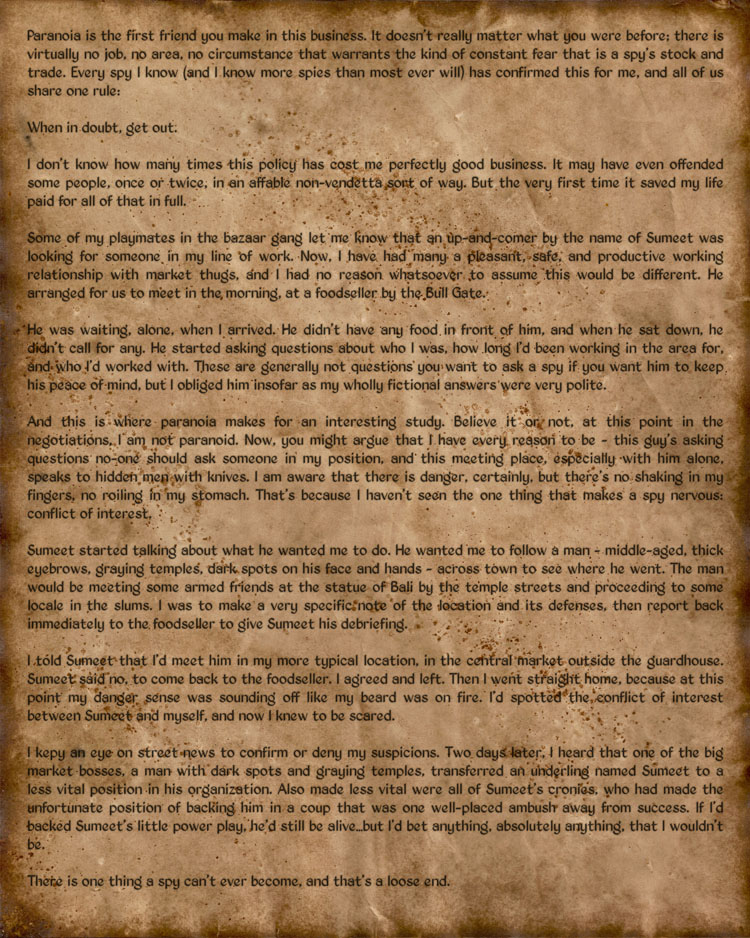 Below is a text version of the second spy diary entry. To view the journal page as an image, as it will appear in the final novella, click the thumbnail above.

Paranoia is the first friend you make in this business. It doesn’t really matter what you were before; there is virtually no job, no area, no circumstance that warrants the kind of constant fear that is a spy’s stock and trade. Every spy I know (and I know more spies than most ever will) has confirmed this for me, and all of us share one rule:

When in doubt, get out.

I don’t know how many times this policy has cost me perfectly good business. It may have even offended some people, once or twice, in an affable non-vendetta sort of way. But the very first time it saved my life paid for all of that in full.

Some of my playmates in the bazaar gang let me know that an up-and-comer by the name of Sumeet was looking for someone in my line of work. Now, I have had many a pleasant, safe, and productive working relationship with market thugs, and I had no reason whatsoever to assume this would be different. He arranged for us to meet in the morning, at a foodseller by the Bull Gate.

He was waiting, alone, when I arrived. He didn’t have any food in front of him, and when he sat down, he didn’t call for any. He started asking questions about who I was, how long I’d been working in the area for, and who I’d worked with. These are generally not questions you want to ask a spy if you want him to keep his peace of mind, but I obliged him insofar as my wholly fictional answers were very polite.

And this is where paranoia makes for an interesting study. Believe it or not, at this point in the negotiations, I am not paranoid. Now, you might argue that I have every reason to be—this guy’s asking questions no-one should ask someone in my position, and this meeting place, especially with him alone, speaks to hidden men with knives. I am aware that there is danger, certainly, but there’s no shaking in my fingers, no roiling in my stomach. That’s because I haven’t seen the one thing that makes a spy nervous: conflict of interest.

Sumeet started talking about what he wanted me to do. He wanted me to follow a man-- middle-aged, thick eyebrows, graying temples, dark spots on his face and hands—across town to see where he went. The man would be meeting some armed friends at the statue of Bali by the temple streets and proceeding to some locale in the slums. I was to make a very specific note of the location and its defenses, then report back immediately to the foodseller to give Sumeet his debriefing.

I told Sumeet that I’d meet him in my more typical location, in the central market outside the guardhouse. Sumeet said no, to come back to the foodseller. I agreed and left. Then I went straight home, because at this point my danger sense was sounding off like my beard was on fire. I’d spotted the conflict of interest between Sumeet and myself, and now I knew to be scared.

I kepy an eye on street news to confirm or deny my suspicions. Two days later, I heard that one of the big market bosses, a man with dark spots and graying temples, transferred an underling named Sumeet to a less vital position in his organization. Also made less vital were all of Sumeet’s cronies, who had made the unfortunate position of backing him in a coup that was one well-placed ambush away from success. If I’d backed Sumeet’s little power play, he’d still be alive…but I’d bet anything, absolutely anything, that I wouldn’t be.

There is one thing a spy can’t ever become, and that’s a loose end.