Nations rise and fall, conquerors seize empires and lose them in the span of a single generation, faiths unite a people and then drive them apart—and through all of it, Bhimra has stood unmoved and unbroken.

The following is a sample of the world and characters of Unrest, an upcoming RPG by Pyrodactyl Games. Check this space every week for updates on its development

Trade nations rise and fall, conquerors seize empires and lose them in the span of a single generation, faiths unite a people and then drive them apart—and through all of it, Bhimra has stood unmoved and unbroken. It has always drawn strength from its own immutability; no matter what happens, no matter what disasters loom, Bhimra’s castes and traditions and rulership have remained constants. The privileged of this society regard this as security; certain others, from their vantage in the slums or shadows, name it complacency.

For the first time in the city’s history, and to offset a brutal famine and collapse of trade, the royal family has struck an alliance with the Naga Empire. Previous rulers had wanted nothing to do with the snake-people of the tropics, and the naga, for their part, have returned the sentiment; in consequence, citizens of either people have derided the new exchange of goods, protection, and immigrants as an intrinsically dangerous or unworthy endeavor. Within Bhimra particularly, naga immigrants are greeted with contempt, suspicion, and even violence.

Feuds between the immigrants and the locals strike the first spark of unrest in a city long-accustomed to peace. But these may have passed, and stability may have eventually returned…if it weren’t for the rise of Ranveer. 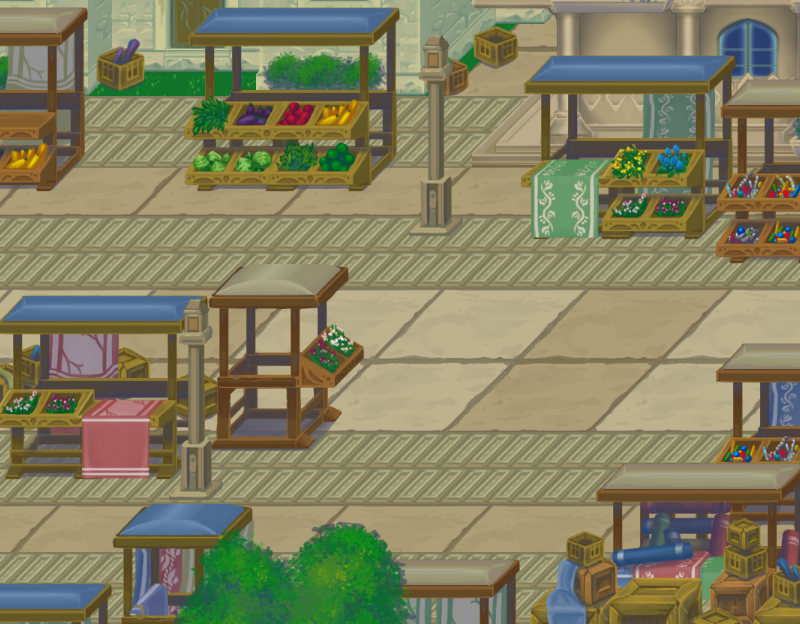 The market of Bhimra is home to some of the most exotic goods, shrewdest merchants, and quickest pickpockets in the world.


Diary of a Bhimra Spy, Part 1 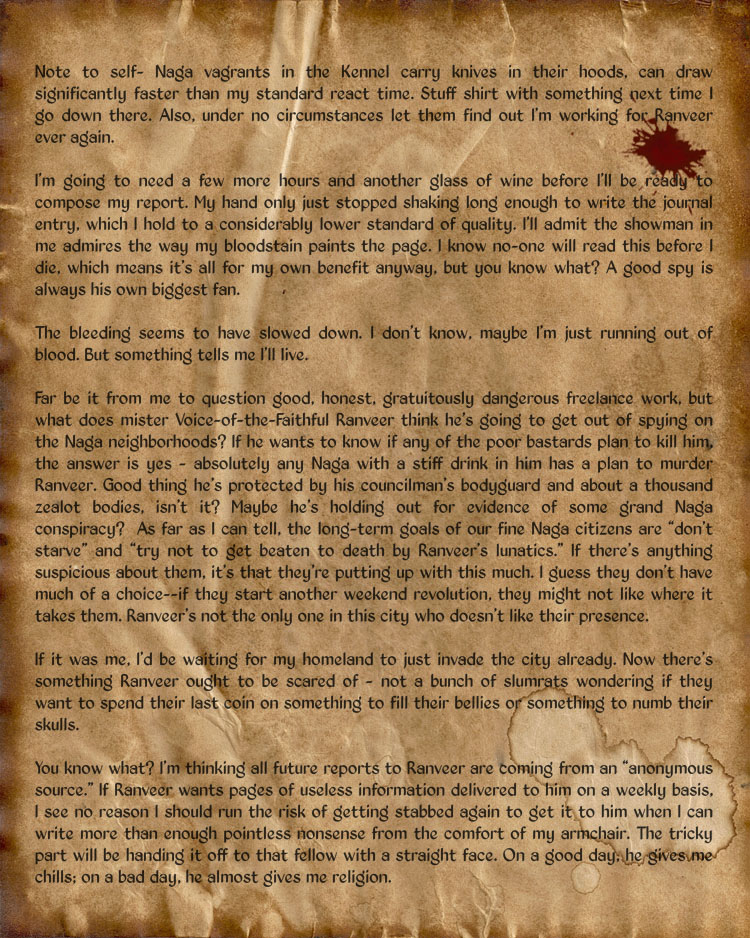 Below is a text version of the first spy diary entry. To view the journal page as an image, as it will appear in the final novella, click the thumbnail above.

Note to self—Naga vagrants in the Kennel carry knives in their hoods, can draw significantly faster than my standard react time. Stuff shirt with something next time I go down there. Also, under no circumstances let them find out I’m working for Ranveer ever again.

I’m going to need a few more hours and another glass of wine before I’ll be ready to compose my report. My hand only just stopped shaking long enough to write the journal entry, which I hold to a considerably lower standard of quality. I’ll admit the showman in me admires the way my bloodstain paints the page. I know no-one will read this before I die, which means it’s all for my own benefit anyway, but you know what? A good spy is always his own biggest fan.

The bleeding seems to have slowed down. I don’t know, maybe I’m just running out of blood. But something tells me I’ll live.

Far be it from me to question good, honest, gratuitously dangerous freelance work, but what does mister Voice-of-the-Faithful Ranveer think he’s going to get out of spying on the Naga neighborhoods? If he wants to know if any of the poor bastards plan to kill him, the answer is yes—absolutely any Naga with a stiff drink in him has a plan to murder Ranveer. Good thing he’s protected by his councilman’s bodyguard and about a thousand zealot bodies, isn’t it? Maybe he’s holding out for evidence of some grand Naga conspiracy? As far as I can tell, the long-term goals of our fine Naga citizens are “don’t starve” and “try not to get beaten to death by Ranveer’s lunatics.” If there’s anything suspicious about them, it’s that they’re putting up with this much. I guess they don’t have much of a choice–if they start another weekend revolution, they might not like where it takes them. Ranveer’s not the only one in this city who doesn’t like their presence.If it was me, I’d be waiting for my homeland to just invade the city already. Now there’s something Ranveer ought to be scared of—not a bunch of slumrats wondering if they want to spend their last coin on something to fill their bellies or something to numb their skulls.

You know what? I’m thinking all future reports to Ranveer are coming from an “anonymous source.” If Ranveer wants pages of useless information delivered to him on a weekly basis, I see no reason I should run the risk of getting stabbed again to get it to him when I can write more than enough pointless nonsense from the comfort of my armchair. The tricky part will be handing it off to that fellow with a straight face. On a good day, he gives me chills; on a bad day, he almost gives me religion.