Learn about all the features we've added to Tabletop Playground so far in 2020, from a new instant editor, grouping objects and formations and much more! 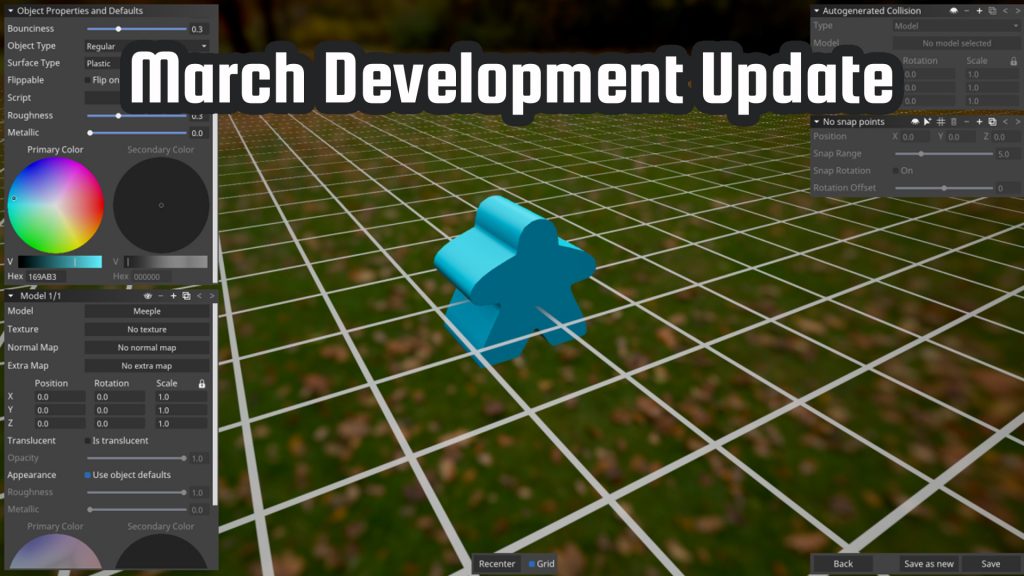 Welcome to our latest development update for Tabletop Playground, spotlighting the latest features we've added to the game. Our last few announcements have been focused on our publishing partnership with Modularity Games and our monthly community competitions, so we wanted to bring the focus back to all the work we've been doing on the game!

Check out all the big features we've added over the last couple of months below and if there are any specific features you'd like to see in Tabletop Playground, join our growing Discord community and let us know!

The instant editor is one of the latest features we've added to Tabletop Playground.

Instant editor - You can now instantly switch to editing an object template while creating a game state for your package: right click on an object and choose "Edit template". The editor will be launched immediately, without leaving the table!

Updated editor camera controls - The editor camera has been updated to feel more like the in-game camera. It now also supports switching to first person mode and moving around using the keyboard.

Editor grid - You can now activate a grid while editing objects. The grid shows where Z is 0 and has a color mark where X and Y are also 0. It automatically scales with distance and shows either millimetre, centimetre, decimetre, or meter.

Duplicate buttons in editor - In all "- + < >" button rows in the editor (models, cards, etc.), a new button has been added that duplicates the currently selected element. The design of the buttons has also been improved.

Object grouping and formations is a feature we've been excited about adding since starting development on the game!

Object grouping and formations - Objects can now be grouped (and un-grouped) from the context menu. Grouped objects always get picked up together. You can use this feature to create formations that you want to move as a whole. Object groups are replicated for all players and saved in game states.

New session option: Always Snap - When active, objects that are released (and not thrown) always "snap" with a quick animation, instead of falling physically. When Locked Physics is also active, dropped objects are immediately locked.

New session option: Lift over objects - When active, held objects are lifted above other objects so they don't collide. This option is now on by default, which means that the default behaviour is now different. Turn it off if you want held objects to collide with other physical objects on the table.

Dropping stacks of cards into holders in action.

Optional 2D style cursor highlighting - A new option in the interface settings allows you to switch the cursor to 2D highlighting, which will make it feel more like a classic on-screen cursor. The difference is subtle: Instead of highlighting objects above the cursor in 3D space, objects between the cursor and the camera are highlighted. And when picking up a single object, it will not be centered on the cursor but remain at the current offset (similar to what happens when you pick up a group of objects).

Dice for scripting - Dice are now represented as their own 'dice' object. You can find or change their current face, get the names of faces as defined in the editor, and roll them. There's also a new global event hook 'onDiceRolled' that gets called whenever a player has rolled dice.

mod.io status window - The main menu now shows an info window for mod.io. You can see the connections status and pending downloads with progress. There's also buttons to open the mod.io page and refresh current downloads. 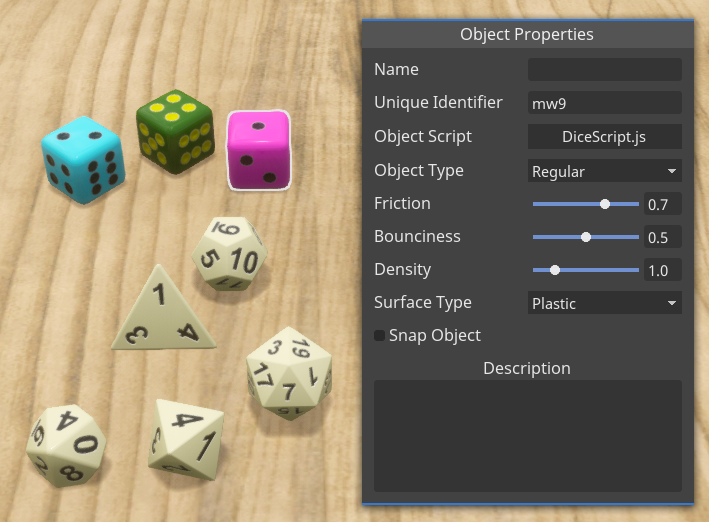 Dice can now be represented as their own 'dice' object, which makes scripting them all the easier!

These are just some of the major features we've added and changes we have made to Tabletop Playground throughout 2020 so far. We did an update focused on community requests at the start of this year and have an extensive change-log we could include here, but it'd be insanely long!

You can check out and keep up to date with all the latest TP updates on our Discord server, where we share the change-log for every new update we push! By joining our Discord you'll be able to sign up to our closed beta Creator's Program and start testing out and creating content for the game right now, so don't hesitate joining our growing community.

As always, to be the first to know exactly when Tabletop Playground will be releasing in Q2 this year, be sure to follow us on Facebook, Twitter, IndieDB, Steam, Itch.io and sign up to our newsletter. Until next time Meeples, we hope all your games are good ones!