Get System Recovery with 7 other games dirt cheap in the Groupees Greenlight bundle during the next two weeks for a minimum price of 1$!

For the next two weeks, System Recovery will be available for a minimum price of $1 if you get two games from the bundle, up to 4$ if you wish to get them all.

Check out the Groupees "Build a Greenlight 28" bundle here:
Groupees.com

Each purchase of System Recovery comes with an Itch key and if we get greenlit, a Steam key aswell!

Check out our most recent trailer if you haven't already

The walls ingame have been redesigned since the trailer was recorded: 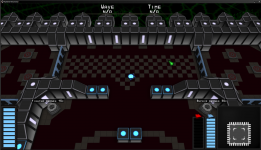 Version 0.77c had just hit the shelves on Itch.io and the bundle.

Some of the changes include minor optimizations and bugfixes, some general polishing and the career mode had seen a bit of balancing. The boss now has a proper healthbar and is slightly less deadly (but still challenging), as the majority of weapons have been buffed to help you deal with it.

Upcoming things to look out for:

Try the most recent DEMO version

I'm very eager to hear your thoughts and suggestions about the game!

Hit us up on our Subreddit if you'd like to get involved with the community:
/r/systemrecovery/