Swipey Rogue is a swipe-action, auto-runner mashed up with a dungeon-crawling, room-puzzler. The game is nearing release. This week I explain the last system that was added to the game before it was submitted for app store approval: Prize Codes. I outline the value of this feature and share a video demonstration, enjoy! 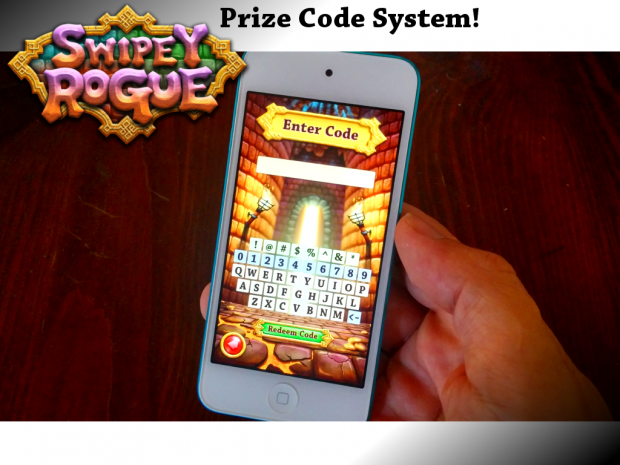 I submitted Swipey Rogue for review to the App Store and all was well. Then, while I waited I prepped the Android version to be ready to release as soon as iOS App Store approval happened (it is very important to me to release on iOS and Android simultaneously). Well, while polishing the Android version, I added a system for prize code redemption. I loved the idea so much, I pulled my iOS App Store submission so I could add it to the iOS build and re-submit. Crazy I know, but it's a very valuable feature.

I wrote a simple server backend system that allows me to create new codes after the game has released. Each code can specify the type of reward and the amount of reward. I can also set up expiration times for the codes so they all time out. This allows me to constantly share new codes and stay connected with players instead of just abandoning the game when it comes out. 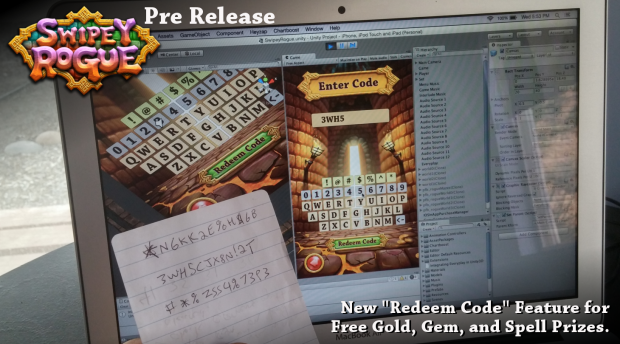 How do they work?

Here's a video demonstration where I speak really quickly because I'm super excited while demo'ing the new system.

As always, thanks for dropping by to check in on progress on Swipey Rogue. I think I've about wrapped up now. The iOS build was approved by the App Store, but I found a really bad issue while testing so I pulled the build, fixed, and re-submitted again (3rd time!). It is still in status "Waiting For Review" hopefully it gets reviewed soon, and hopefully it is approved smoothly like last time. The Android version is all finished now. I integrated all the Google Play services for IAP, Leaderboards, Achievements, Social Share, and Rating. I feel great that I will be releasing on both platforms on the same day. Many larger games and larger studios don't accomplish this so it's a little victory for a small, one man operation like myself.

Stay tuned for release info and some prize codes!