Hey there! This week we wanted to talk about Submarine Warfare during the Cold War. Many accounts describe the submarine warfare between the rival superpowers as a ''cat and mouse'' game.

The USA and its NATO allies enjoyed a clear technical edge in submarine technology compared to the Soviet Union, specifically in the field of silent running. Reports jokingly mentioned certain Soviet submarines to be so loud that they were heard across the Atlantic (in Hyperbole of course). Nowhere was it more relevant than the Arctic region, which had significant strategic importance in the Cold War.

The arrival of nuclear-powered submarines in the 1950s brought a serious change in submarine warfare. This directly enhanced the speed, depth limit and the endurance of submarines. They grew bigger and eventually some converted into missile platforms. The evolution ushered in the era of the Ballistic Missile Submarine (SLBM) with the capability of firing nuclear missiles. Their lethality, resilience, and silence made them the most survivable component of the nuclear triad. The triad consisted of strategic bombers, land based intercontinental ballistic missiles (ICBM's), and submarine-launched ballistic missiles (SLBM's).

The preemptive Nuclear Strike was a military strategy aimed at decapitating the enemy weapons arsenal to such a degree that the attacking country could survive a weak retaliation while the side struck wouldn't have been able to continue a war. This was planned by attacking the opponent's land based strategic nuclear weapon facilities such as missile silos, submarine bases, bomber airfields, command and control sites, and storage depots. The only deterrence to an aggressors preemptive Nuclear Strike was the possibility of a retaliatory ''Second Strike''. SLBM's therefore, added a counter strategy to the ''preemptive strike''. The ''Second Strike'' doctrine was reliant on SLBM's with their high mobility and near unlimited range posed formidable fear factor to any would be aggressor.

These strategic nuclear aspects made the Arctic a giant sub-zero battleground for submarine warfare. Whoever controlled that geographic arena could potentially conduct that feared retaliatory strike. In celebration of the bravery of the submarine crews, we would like to share a screenshot of the in game Arctic theater. As we advance towards the Kickstarter campaign launch on March 30th, we would like to take a moment to thank you for all the continued support. Happy upcoming day of International Day of Happiness on a very happy Sunday. 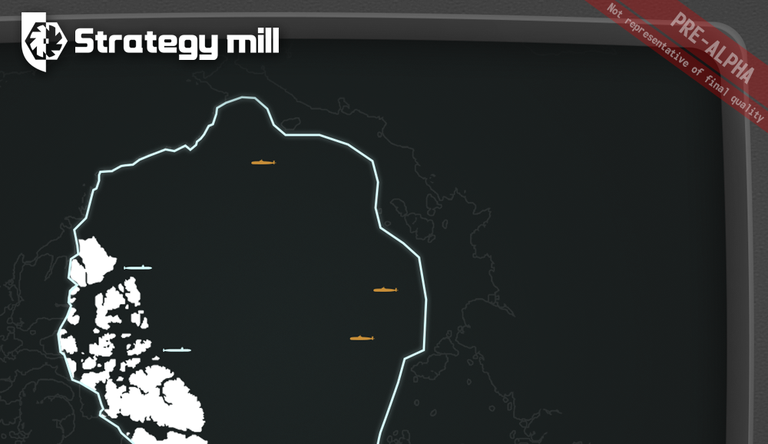