A quick catch-up post on where we've been, talent trees, and builds.

Hello again! Yes, Salt the Earth is still under development and is not an abandoned project. Unfortunately, I've been very busy with real life recently, and while I've continued to work on the project, I haven't had the extra time I need to put together IndieDB and website posts. There's been lots of work and lots of changes, but until now, I haven't been able to share any of it. So, with that out of the way, lets get into what's new!

(The image below shows the continued changes to our code over time.)

We finally have a Steam page! You can find it in the link below. Not only is the Steam page up, but I've finished integrating the Steam API into our codebase, ensuring that client's own the game, and allow us to use Steam for deployment, feedback, updates, and much more. We still plan on doing our own ranking, matchmaking, and other competitive systems. This will give us more control over how the game functions and how players interact.
Store.steampowered.com 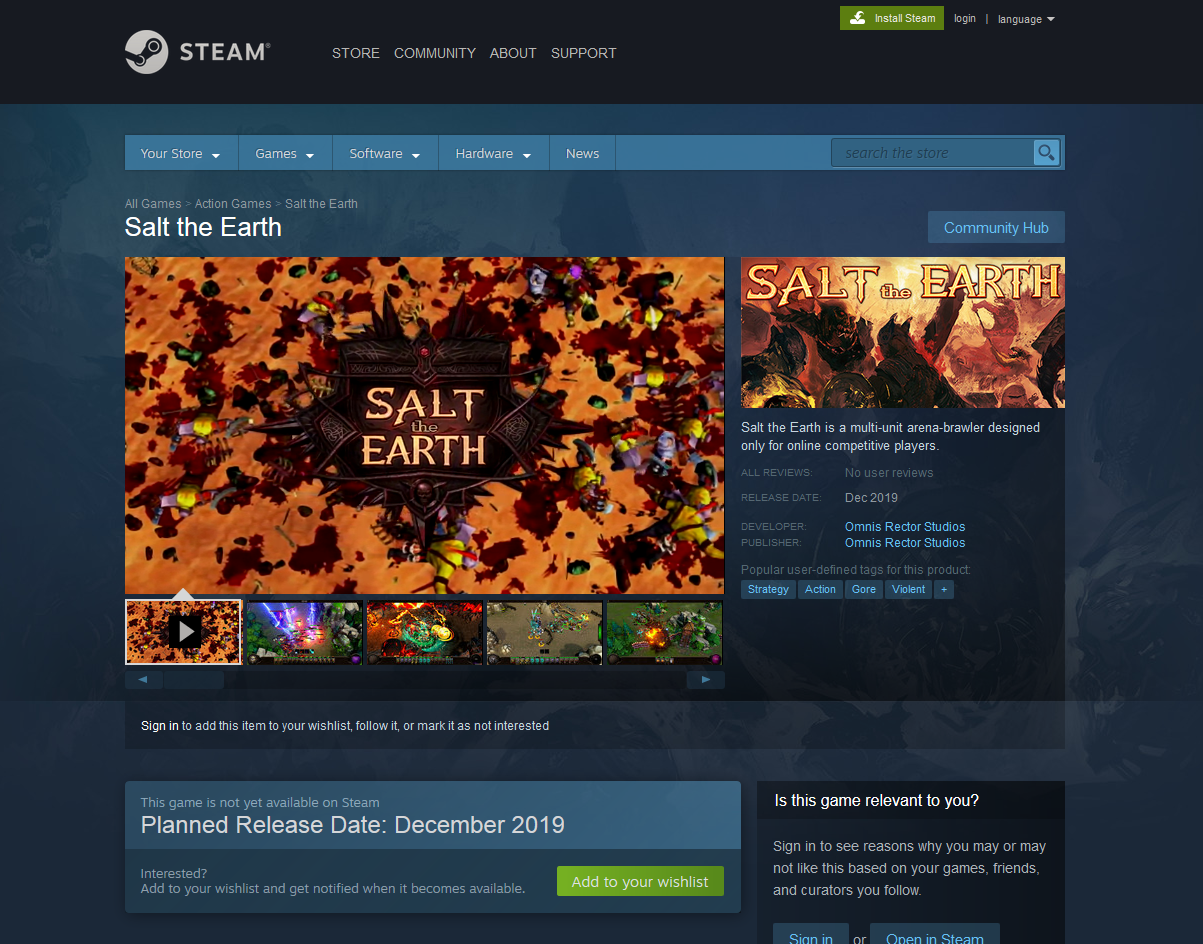 I've always wanted to let player's unlock races and units as they played the game. Its good to have some sort of progression system in the game. The reason for this is because it prevents a player from starting the game and being immediately overwhelmed with the number of units and abilities. So it dawned on me recently that I could include abilities into this progression system as well. After a few weeks of working in the UI and the database, we have: Talent Trees! (kind of)
As players play games they earn points. Winning grants you these points faster than losing. These points can be spent to unlock races. Once a race is unlocked, you can unlock units. Once a unit is unlocked, you can unlock its abilities. All of these unlocks will be fairly quick for someone playing the game frequently. We promise to not make you grind!
In the below screenshot you can see a sample of the Undead race talent tree. I'm going to do another entire IndieDB post on just talent trees, so I won't go into too much detail here. 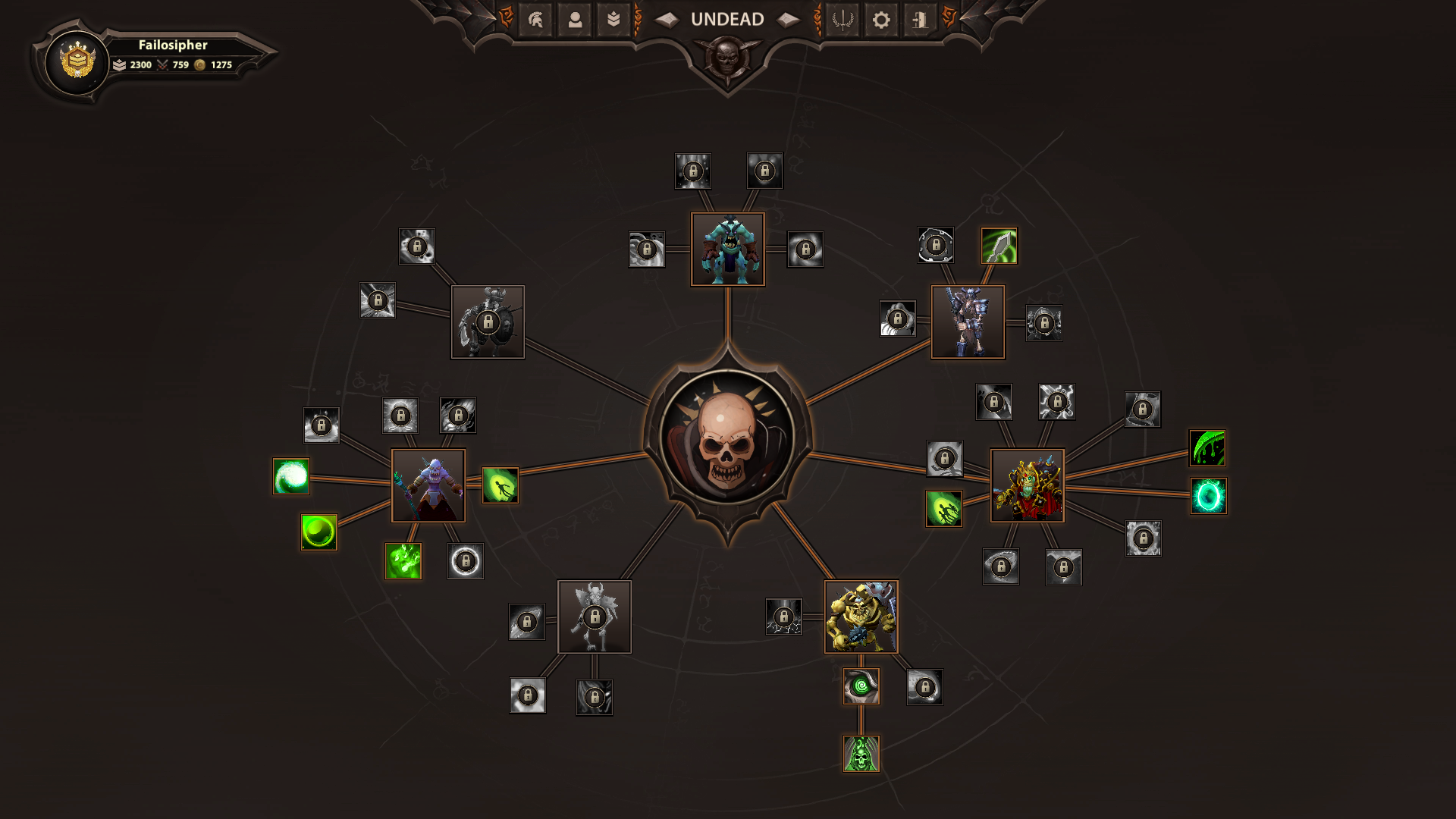 Just like talent trees, I'm going to take the time to do an entire post on this section, but let me give you the short version. We're abandoning a concept: draft mode. Draft mode was what you got put into once the game matched you with an opponent. It let you and your opponent take turns picking units, allowing you to respond to your opponents choices.
The reason we're abandoning this concept is because we want players to be able to put together 'builds'. A build is a collection of units with a selection of abilities. Being able to put together builds before the game starts is a bit like putting together a rune page in (old) League of Legends, or selecting talents in WoW. We're also doing it in such a way that players can easily screenshot a build and share information online. We want people to be able to compare and share builds, to establish or break a meta, and so on.
The interface you see below is only a mock-up. I'm currently about 60% of the way done with the Build system and hope to have it finished within the next week or so. 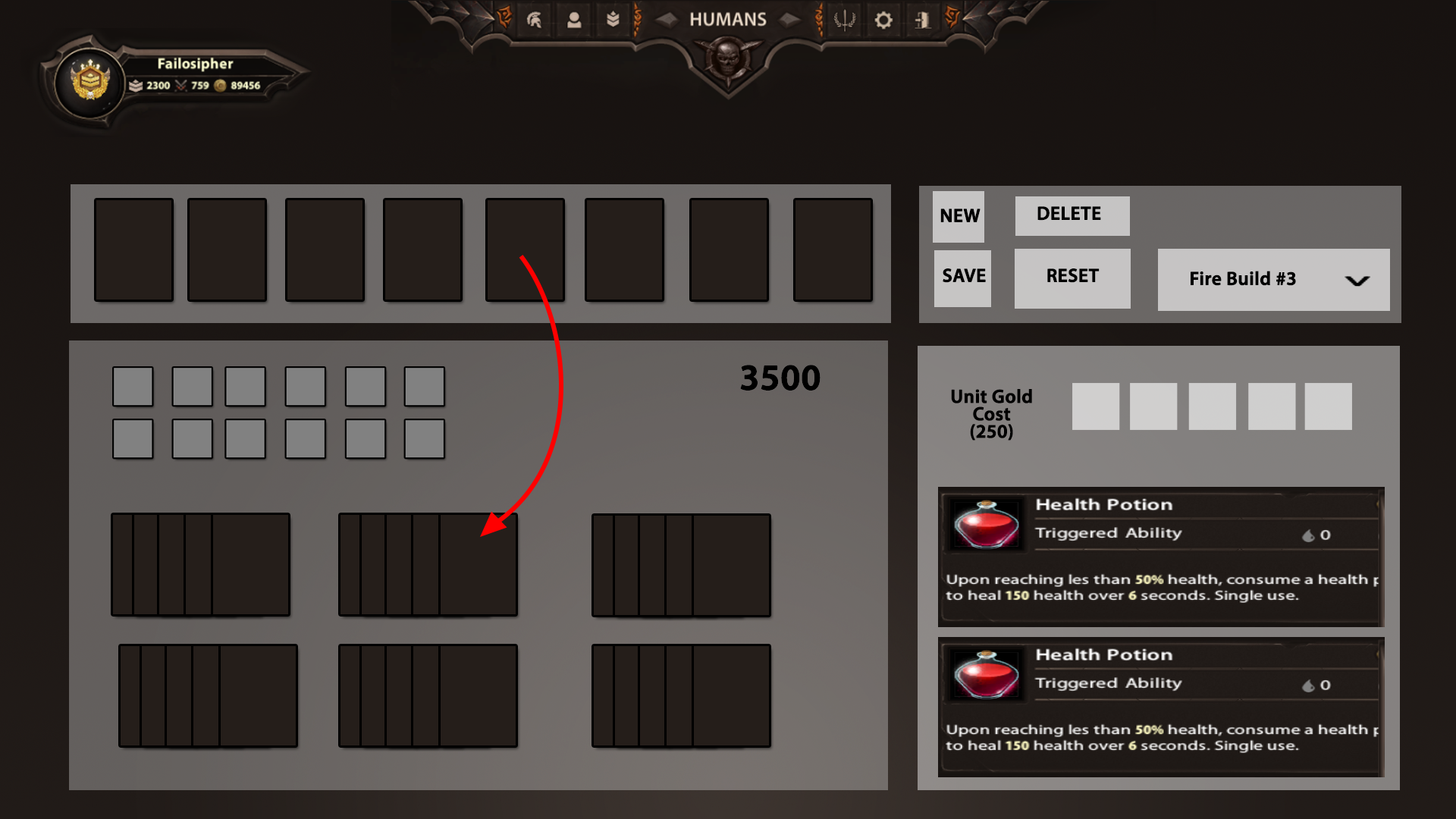 As I said previously, I'm working on the Build system right now. Once that's done (and factoring in some time for IndieDB posts / website updates), I've got some more UI things to clean up, and then we're finally off to working on multi-player server scaling. This is the biggest challenge and one that I've left off for the end for a reason. Basically, we'll be setting up cloud servers to host our game servers, where players will actually play matches. Once that's done, we'll enter a closed-testing for a few weeks, and then invite-only testing for a few more weeks. After that we'll be doing a public test where anyone can play. During that time we'll be fixing bugs, adjusting abilities, and most likely rolling out new maps and other minor content.
Salt the Earth has been my passion project for almost four years now. I will see this project to completion. I hope to see you there when I do. Thank you for all the views and comments.