The nominations for the annual Steam Awards are opening ...

The nominations for the annual Steam Awards are opening, along with the start of the Steam Autumn Sale. You may still remember that back in 2016, our incredible #BestCommunityEver was so active during the first year of Steam Awards, that our Euro Truck Simulator 2 managed to claim victory in two categories.

However, time flies, a lot of fantastic games have been added to the Steam library over the years, and many of them have rightfully accumulated massive fan-bases as well. Meanwhile, Valve adjusted the rules such that titles launched before 2019 can now be nominated in only one category - The Labour of Love, a category that reflects that a game still gets new updates and active support years after launch. This category will surely be very crowded! But still, we may give it a collective try, what do you think? 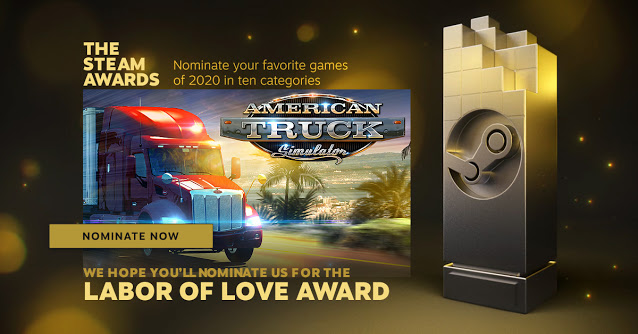 If you feel that American Truck Simulator deserves the Labour of Love award, or possibly at least some buzz and visibility for being nominated and in the category, we will appreciate your vote and support. You can cast your vote by heading to this year's Steam Awards Nominations page.