Get more to know about the new editor features and features to come.

[New Editor demo is out!]

Get it here: Indiedb.com

Usage of copy and paste has been made easier, the amount of materials show up in the interface, information boxes can be hidden, materials can be easier compared, introduced new element types, history got some improvements, and so on and so on. In fact v0.0.037 has the largest change log so far. Considering the amount of changes it has it actually should be called v0.0.040... But that one's gonna be the next version you guys can try out. Scroll at the bottom to see the features I'm planning to add.

I'm a bit behind of the planned schedule for this version, but I think the amount of content and usability really makes up for it. Being only 2 months and a week old I'm very satisfied with the progress.

This is mostly what internal changes were about in this version. Everything is prepared to create all Items using ItemModels (includes the use of ItemEffects). Then, the program generates a set of items using these models which you will be able to use and trade with. This way, you will never have to play with the (almost) same items each time you start a game - and if you're lucky, you'll get some remarkably useful items generated right from the start. 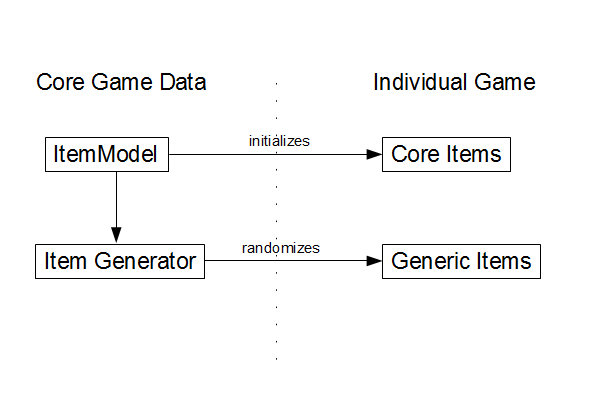 Of course, there's going to be a global item limit that prevents the generator to produce items endlessly, otherwise your inventories will clog up quite fast. Each item has a "point of origin" where the chances of the item to occur is highest, and decreases in a certain radius. Item generation is only triggered while generating new areas of the universe, and if the generic item limit is not exceeded yet. I'm thinking to set the limit of generic items to around 100 - 200 for now, till testing shows to better de-/increase that limit.