The last two weeks were insanely productive, I’ve got a record number of changes, including a ton of balancing and fixes after watching playtesting playthrough videos, but I’ll try to keep this devlog brief and only run through the most significant ones. Strap in and prepare for the ride! 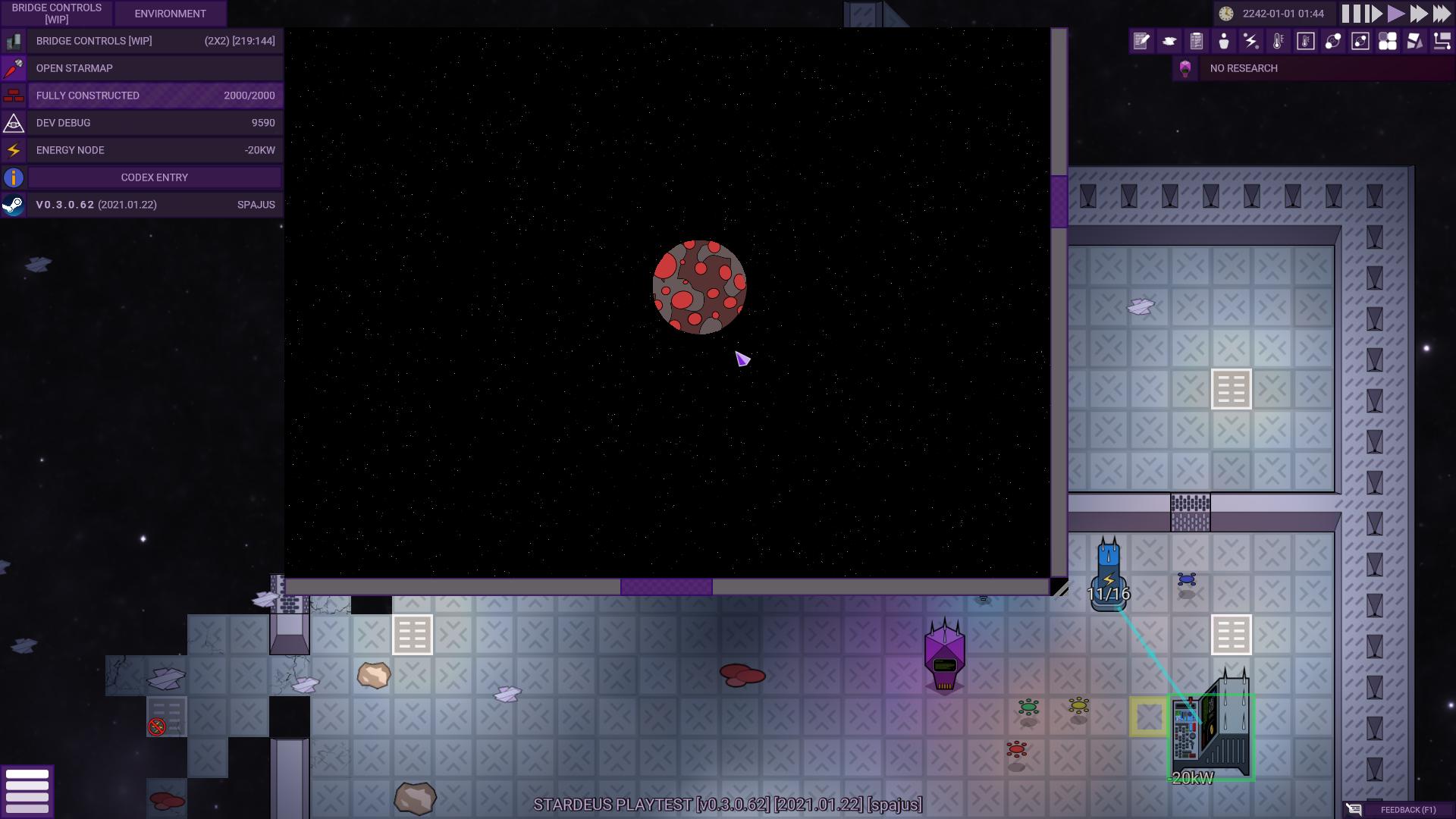 The screenshot is pretty dull, as the Starmap is still early work in progress, but the underlying technical changes are already here, and for me it was the most challenging and exciting change.

It required a significant rewrite of core architecture, but now Stardeus supports saving, loading and switching between multiple locations. This will be essential for space exploration, combat, asteroid mining, scavenging abandoned ship wreckages and landing on planets.

Default scenario in Stardeus now has a starting location - your wrecked ship is lost somewhere in between star systems. You will be able to travel across different systems and explore their planets, but that’s not all. The set of systems you will start in is just one single galaxy. There will be multiple galaxies billions of lightyears away from each other, and you will need to research and build some fairly advanced tech to explore them.
The universe implementation is fully procedurally generated and hierarchical, so in theory implementations of multiverse with parallel universes is also going to be technically possible. Like most content related aspects of Stardeus, the universe generator is built to be easily pluggable, modders will be able to add new space object definitions and generation behaviors, often without writing a single line of code.

The research tree was rebalanced and extended. Also, you can now click on unlockable item icons to get detailed descriptions. And the research tree widget has become zoomable and pannable via WASD. The same technology is used for navigating the Starmap.

This story event will be similar to the asteroid, but with (probably) much more pleasant outcome. On the other hand, you know what an asteroid can do, but have no idea what could be inside that oversized pokeball. Open at your own risk.

Radar will warn about inbound stellar objects (asteroids, unknown entities, ships, etc) ahead of time, so you can prepare for the event. In some cases it will be possible to combine radar warnings with other equipment to avoid the danger by changing your trajectory. In future updates, variations of Radar devices will be used for scanning the surroundings during space travel, detecting raw materials, etc.

Hovering the notification icon will also show a tooltip showing how long ago the event was received, which is almost always useful to know.

Solar panels accumulate dirt and lose their efficiency over time, but the drones will be happy to wipe them off for you. You can choose how dirty the panels should get before the cleanup task is automatically enqueued, and what the cleaning priority will be.

An Energy Connector v2 with 40% shorter range but twice the connection slots was added. Great for plugging in multiple devices in close proximity. Unlocked through “Advanced Energy” research along with solar panels.

You will no longer be able to connect or use damaged devices before repairing them first. Disconnected devices will also show an icon, so you will see them at a glance.

Your robots and drones will show thought bubbles with bolt icon if they are low on energy and they can’t find a spare charge station, giving you a clue that you have to build more of those.

No matter how much I improve the data overview in the electricity grid, there’s never enough information. After studying some playtesting playthroughs, new things were added to help out with the management. It’s definitely not perfect yet, I will keep iterating on this in future updates. 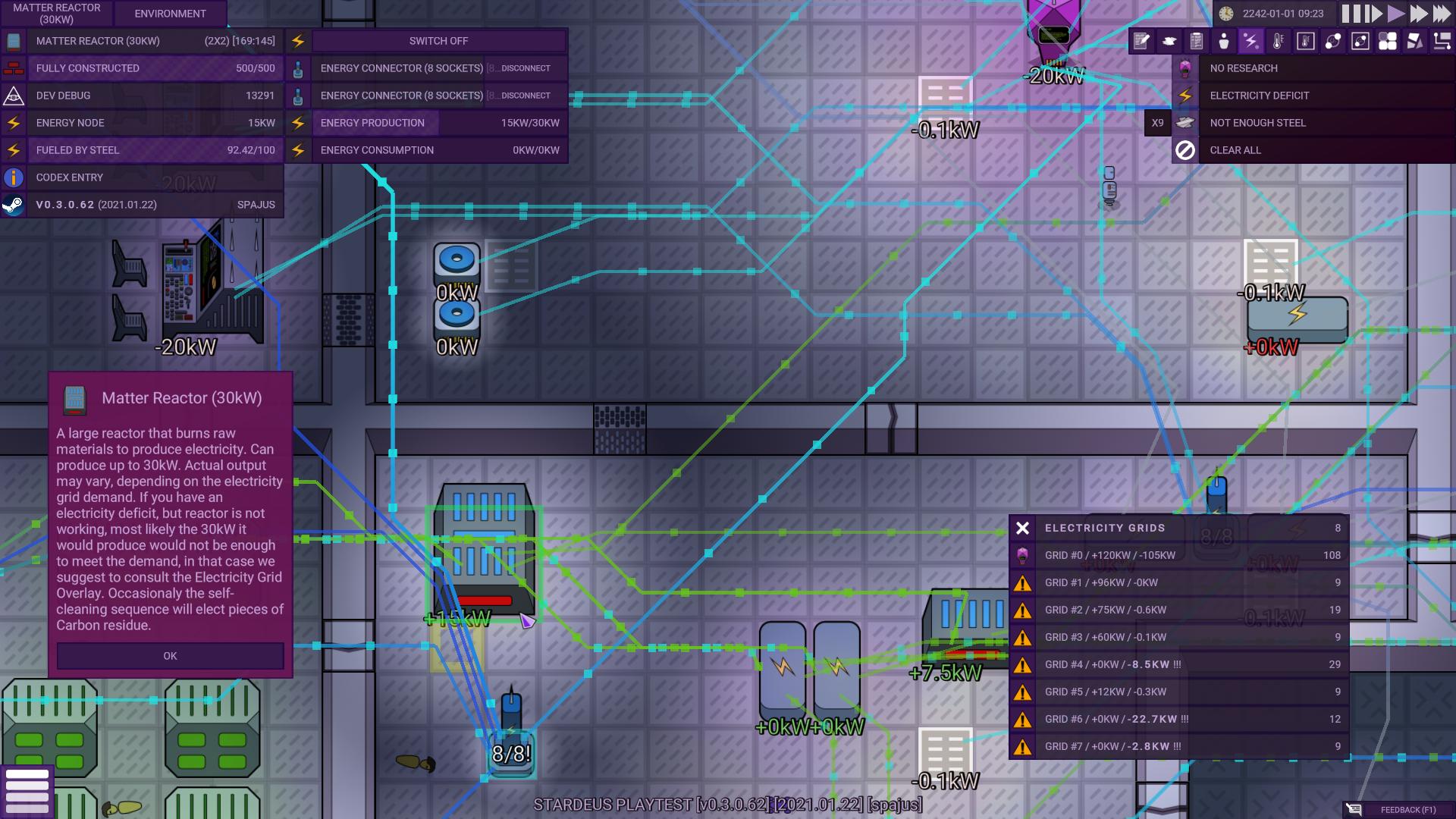 In addition to visual hints, there will be codex entries with detailed explanations of how certain energy producing / consuming devices work, and their max output will be included in the name.

You can customize the colors of most lights. To make color transfer more convenient, there’s now a copy and paste button.

I want Stardeus to be playable on even the weakest devices (including Nintendo Switch), therefore I am often stress testing the game by pushing it to the limits. Here's an example of a 250x250 (standard RimWorld map size) floor tiles built next to a massive procedurally generated space ship.

I could add more noteworthy items, but instead I’ll let you dig through the full list of changes on your own.


v0.2.14 (2021.01.15)
- Try to satisfy robot and drone energy needs before they run out of juice
- Show energy thought bubble for robots and drones when they couldn't find a free charge station
- Show icon on disconnected energy nodes
- Do not auto-adjust the time speed in tutorial when it's not necessary
- Prevent energy research from completing ahead of time during the tutorial
- Improve energy grid rendering performance with large grids
- Show outline of hovered tile in energy connection tool