It has been over two weeks since the last development update, and there are a bunch of noteworthy additions.

To make your story more interesting, the ship computer will be accumulating heat, and eventually will have to perform a cooldown routine. During the cooldown several in-game hours will pass, and you will have absolutely no control over what happens. This will be used to inject various story events. After the cooldown you could find yourself in the middle of a riot, a surprise pirate raid, or a mysterious glowing egg could appear in one of the dark corners of the ship. It is possible to delay the cooldown, but you won’t be able to overclock the CPU to speed up the time flow due to the overheat.

Humans will now avoid taking work that involves going into areas that don’t have safe conditions, and will try to run away into a safer place if the room suddenly loses oxygen or becomes too cold / too hot. Beings will also prevent stopping in doorways, to preserve room airtightness and insulation properties.

Since energy connectors have a connection limit, it will be useful to see how saturated the connector is. This will be automatically displayed whenever you enter the electricity grid view mode, select an electricity enabled device, or use a connection tool. Grid visualization was also improved, connections will now look more motherboard-like, and hopefully it will be easier to tell what is connected to what.

You will also be able to see the connection previews just by hovering connector buttons, so you will know what will be connected or disconnected after you click the button.

To create the alpha trailer, I had to build myself some tooling that stores camera positions and allows it to smoothly float from one point of interest to another. I am now using this extensively to shoot all the gifs and short clips. There is also a demo mode where the camera automatically floats through your base showcasing various objects. It is really useful when taking a break during Twitch streams. 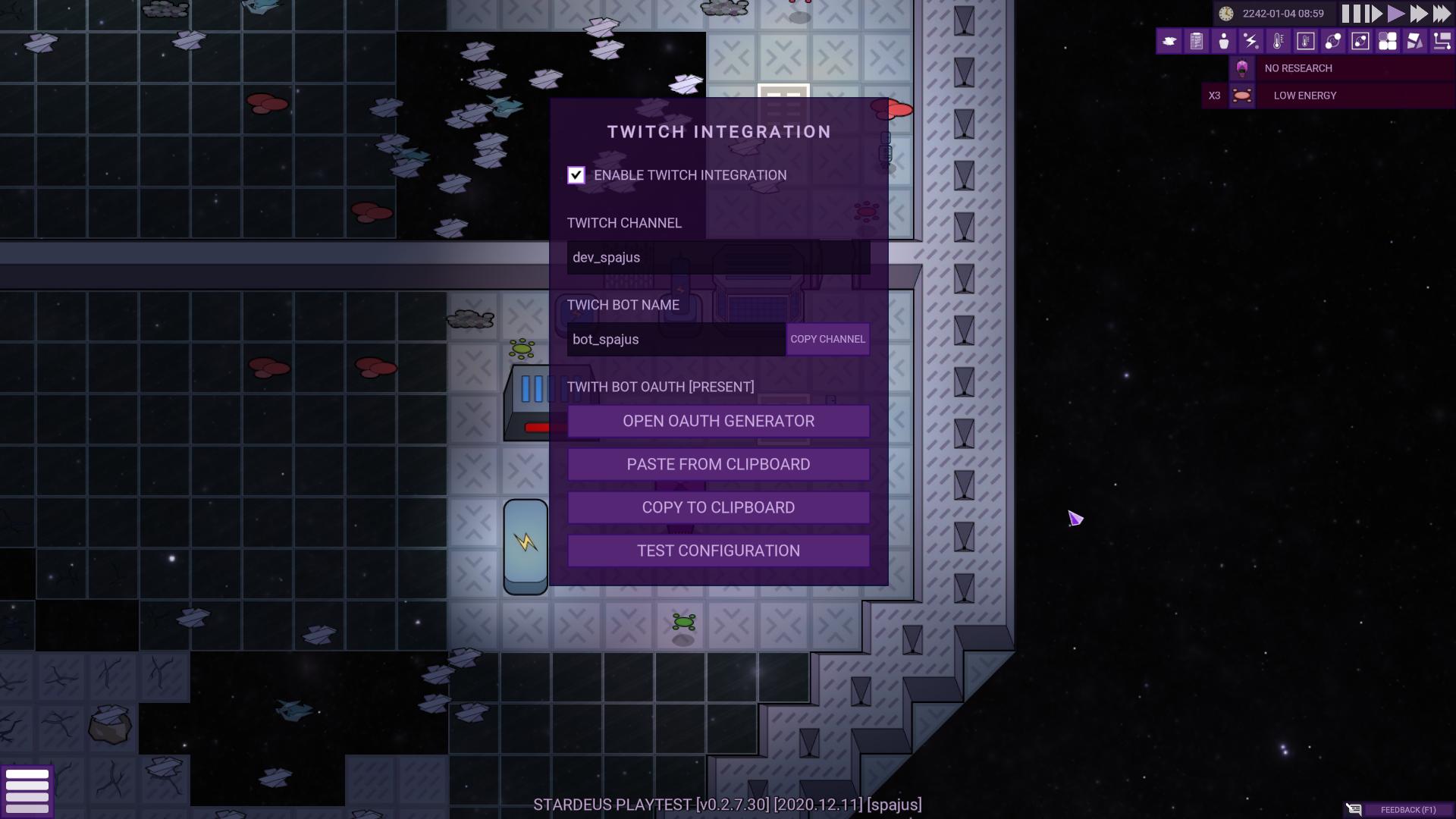 Talking about Twitch, there is an integration that allows playing with viewers. It is easy to configure, and your viewers can use !join to enter your game as a construction drone. They can then use commands like !say to talk, !goto to navigate to the point of camera, !repair to repair some damaged object nearby, and if they earn enough reputation, they could even try to !explode, that starts a 30 second countdown and blasts the drone into pieces, damaging some part of the base. This countdown is preventable, if the streamer finds the drone and clicks “defuse” in time. Twitch integration is built with pluggable commands, so it will be really easy to add new chat commands and behaviors through mods.

There were some improvements done with the “Wrecked Ship” default scenario generation. First, the ship computer and your robot will be generated in safer spots, avoiding situations where the robot gets stuck or where the ship computer is hanging on the edge of a broken floor. 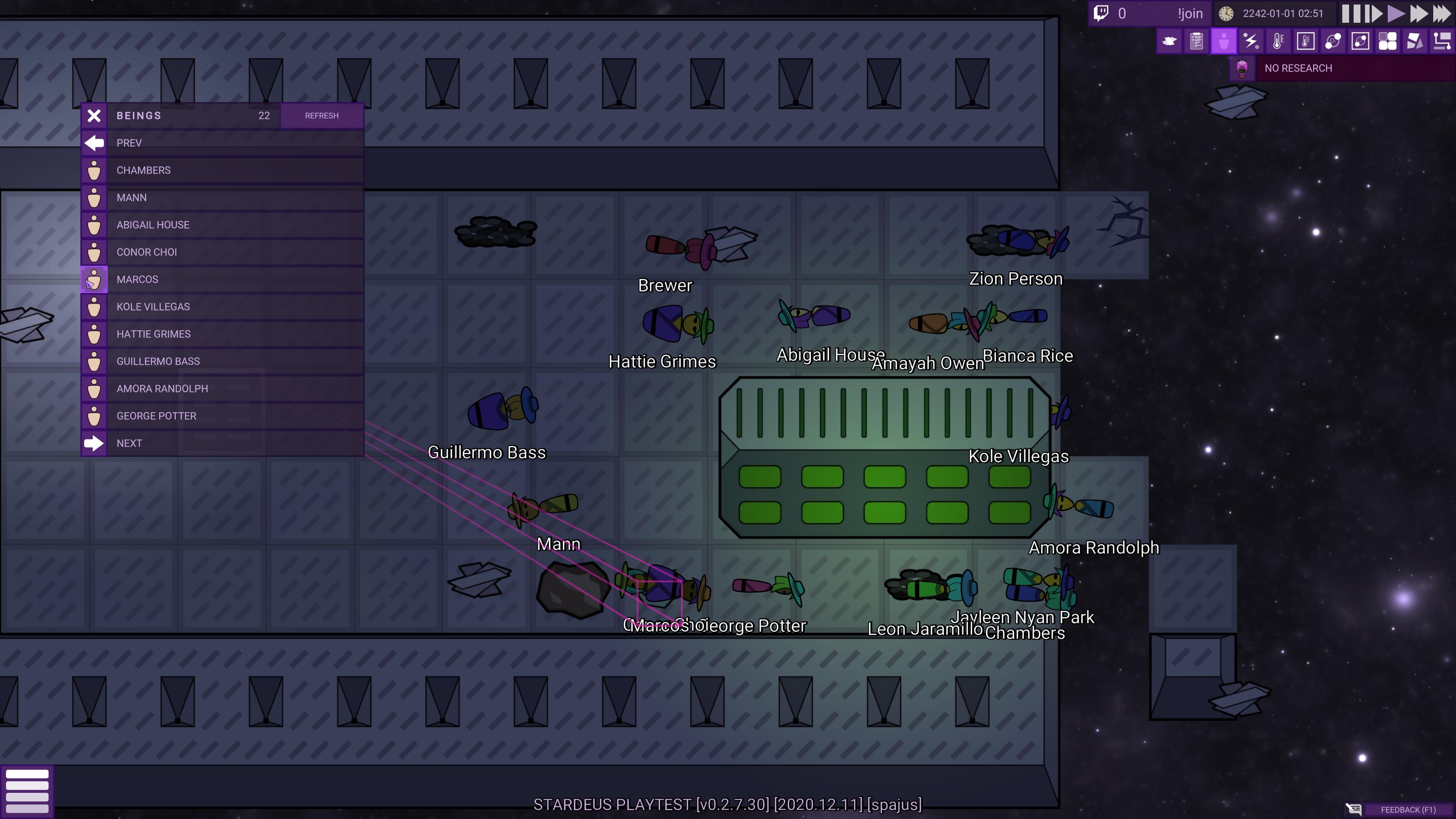 Then, there will be dead bodies near the stasis arrays. It looks a little grim, but it is realistic, since stasis arrays are damaged, people are waking up from time to time, and they are dying in open space. 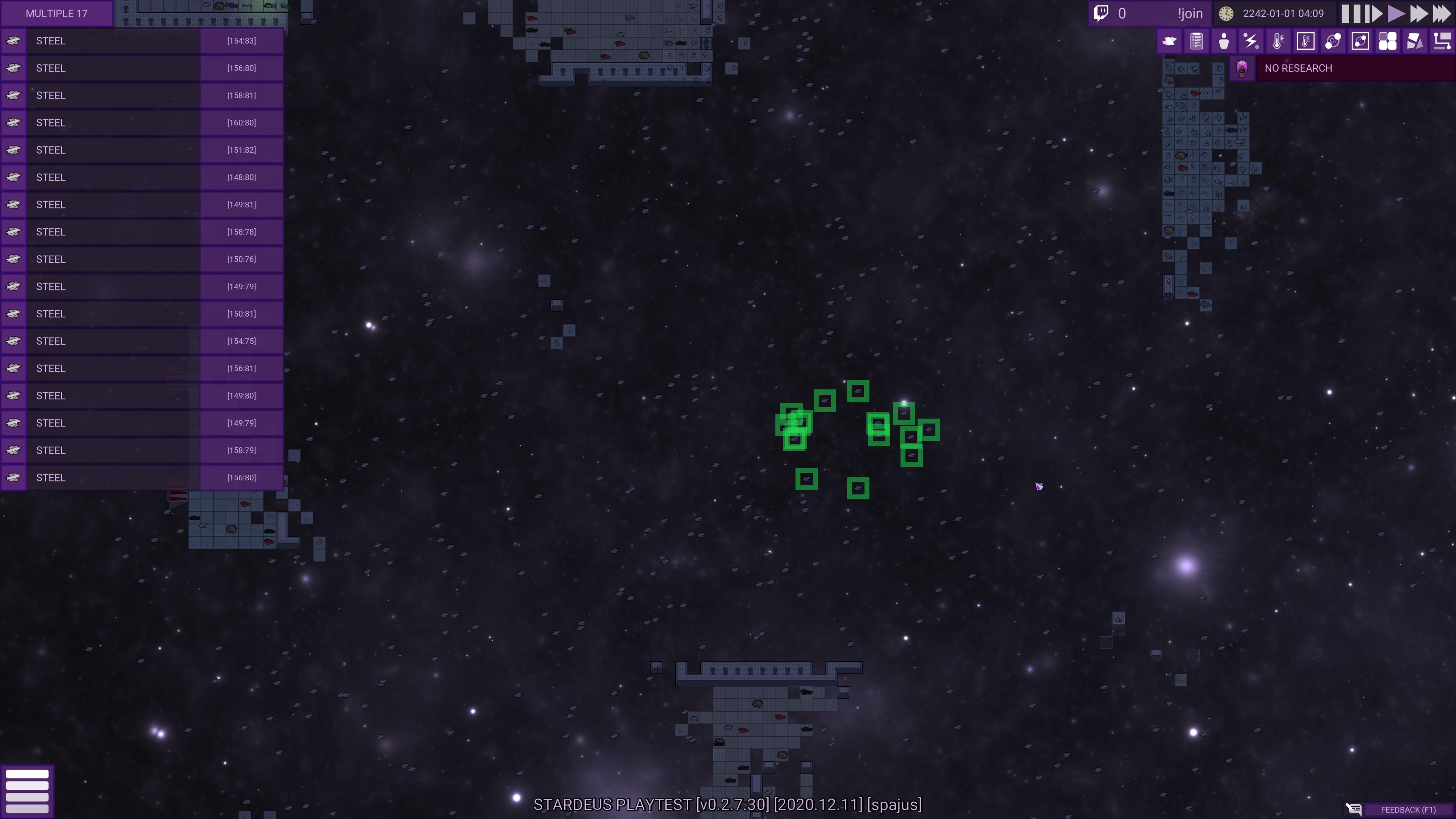 Another generation improvement is a nice side effect of a game mechanic where destroying anything produces raw materials, and when your ship is being generated and later destroyed, the debris will show up naturally where parts of your ship were supposed to be, providing plenty of materials for drones to scavenge in the beginning of the game. This will make you last longer without running out of resources and needing to fly to other sectors of the space in search for minable asteroids or planets.

What frustrates me when playing some more complex games is having to either learn a ton of shortcuts, or dig through endless menus to get something done. In Stardeus there will be a solution for this. You can use TAB to toggle a quick search, where you can type any menu item name, or a name of one of your workers, and hit enter to quickly perform the action, find the worker, or switch into a tool. The quick search is also easily pluggable, so it could be possible to add custom actions or macros in there as well.

Since you will be taking the role of a computer, data is your friend. Hovering some UI elements will show lines from your mouse cursor to the relevant objects, so they will be much easier for you to find.

Auto scale and UI scaling will now be configurable through a settings panel, and there will be some safety checks, preventing the UI of going too big / too small if you change the display resolution. 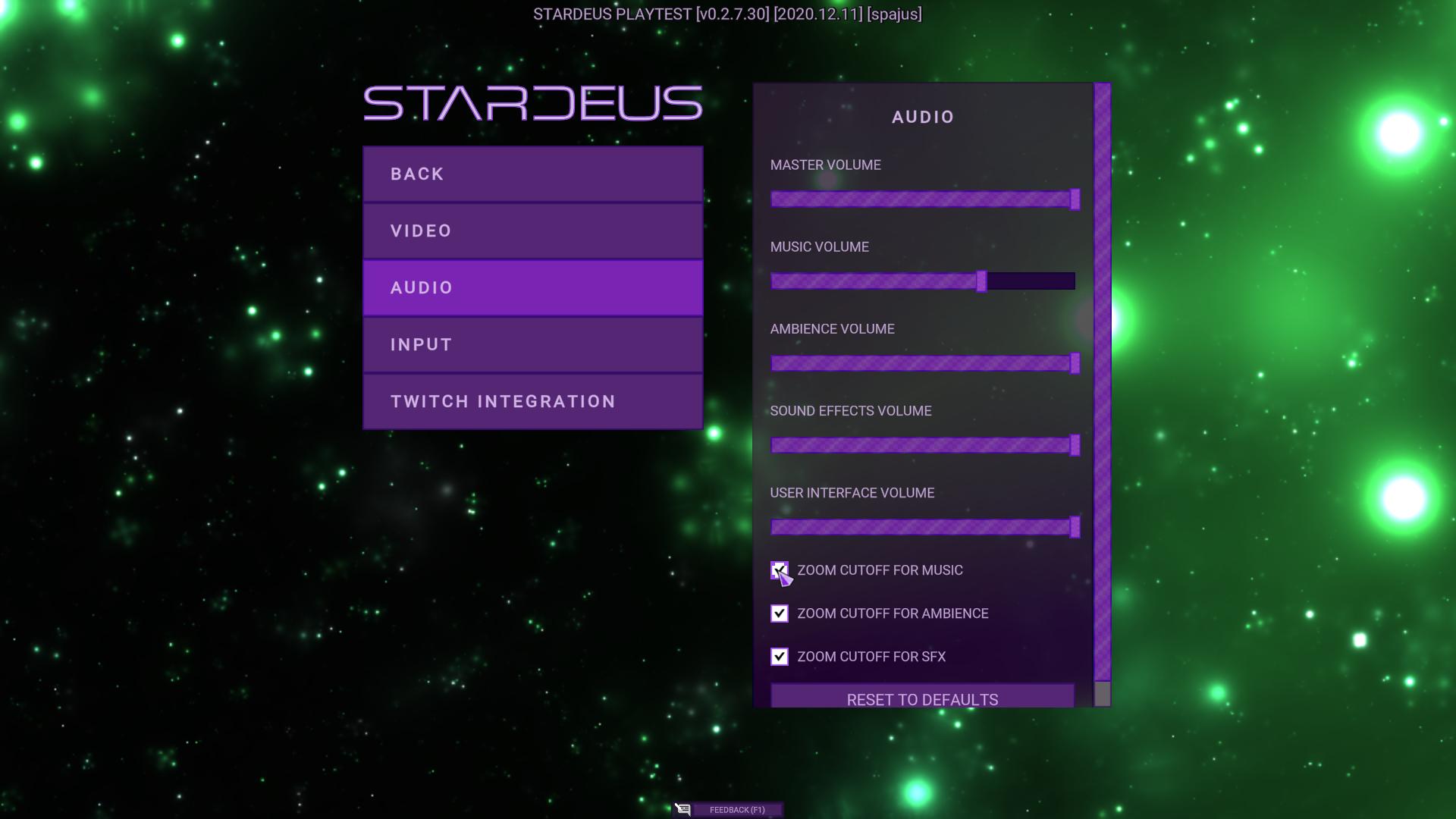 Audio settings will now allow toggling a “cutoff” filter effect that cuts the high frequencies in the music when you zoom in, and does the same to ambience and sound effects when you zoom out.
OST was expanded with several new musical pieces. Here’s one that will be used in intense space battles, or when you robots start a riot.

Curious how I manage to produce so much in just two weeks? View my development streams live on Twitch to find out: dev_spajus

And finally, if you aren't on Kodo Linija Discord server yet, join now: Discord.com