Sharing some news reg new starmap system, scanning of encounters and planets in general! New version will be available before xmas!

I have been working a lot in the last 2 months on the meta game.
Play testers enjoyed the game but they always asked me to push more for exploration and mystery. Let me share some examples of what i have done.

I reworked the system in a way that its more linear. I tried to simulate a system like in Sid Meyer's Pirates! before. Why was is not fun in my view? Let's compare:

Space Pirate: There is actually no need for supporting cities because you don't have resources like fuel or crew. Being attacked or hunted is not so much fun because i don't have ship to ship combat.
The old system and star map were just not complex enough.
Another aspect to talk about is the star map itself. Its "a new map every time you play" but the problem with the old star map was that you don't have too much limiting factors.
Unfogging the old map was not as much fun as it could because the raid able spaceships also move all the time. Everything could be everywhere. It felt too random.

I a nutshell:
I tried to simulate an open world game but its just not exciting enough because its not tied close enough into the core gameloop.

What i worked on:
The new map is still generated everytime you start but its more linear with natural obstacles.
Its fun to unfog the map because there is a more fun progression, levels, rewards and secrets in it.
I am guiding the player through dangerous green nebula, some wormholes and have enemy ships.
You will get a bit of a gamble when encountering an new ship (scan, attack, leave).

I think it still makes sense to keep the mood system in the background (invisible) and change the enemies according to it but i dont think it should be in the focus like it is right now. I rather want to put the most important resource in the focus for such a game which is the loot and the next goal for the player. 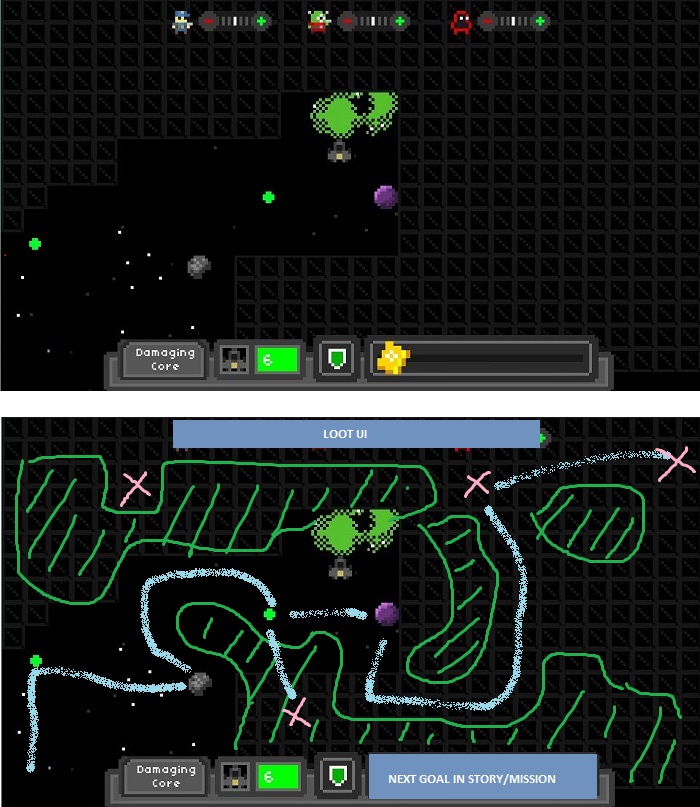 I added a scanning and preview mechanic. Ships and planets can be scanned to find hidden treasure sites but also to discover dangers. This is way more exciting compared to what i had before.

I reworked how planets work. They are not longer hand made but generated using a perlin noise function. Its much more fun this way to discover them and find all their secrets. This is still heavy wip.

I will finish a lot of construction yards and compile a new version before xmas. Hopefully PC and MAC.
Stay Tuned!