Post news RSS Sovereign's Life: How to get Ranks

It doesn't take long for a new Sovereign to build their first three Districts and think 'Now What?'. Odds are you've figured out that Rank comes from Importance like Levels and Experience. Many Actions supply a small amount of Importance with each iteration, but not enough to Rank you up with any quickness.

Sovereign's Life: How to get Ranks

It doesn't take long for a new Sovereign to build their first three Districts and think 'Now What?'. Odds are you've figured out that Rank comes from Importance like Levels and Experience. Many Actions supply a small amount of Importance with each iteration, but not enough to Rank you up with any quickness.

In fact, Rank is one of the most hard-earned achievements in the game. This is a literal representation of the support of your fellow players in the form of fealty pledges, , personal relationships and forum votes bolstered by impressive stuff you've done such as actions, combat, and scenario contributions. 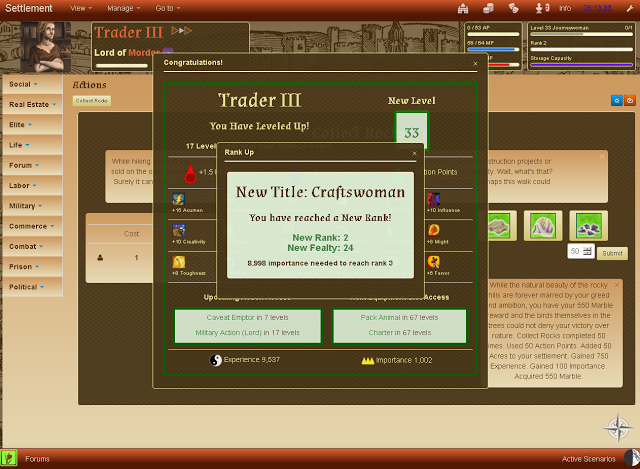 People-Free ImportanceThese are ways in which you can gather importance without the active good-will and participation of another human. These avenues often provide less overall Importance than the social methods, as the point of Importance and Rank is to represent your place in active player society.

Actions
Many actions offer small amounts of Importance. The amount of Importance received from each action is loosely based on the rank of the action and the honor of the act. Taking dishonorable/antisocial actions such as breaking an alliance or trying to escape from prison will usually cost you Importance instead. Higher ranking actions, available to characters at later levels, will provide (or take) more Importance. Watch out for the listed Importance impact when choosing your actions. Some actions have no effect at all. You can also choose to ask the game what your best Importance reward to AP cost will be. Often the best importance providing action will be expensive, and may have effects you're not prepared for, like upkeep on the troops you've just recruited.

Combat
Performing and succeeding in Combat is a sure way to gather Importance. Not all combat is with other players. There are vast opportunities to meet in glorious (Importance granting) combat with NPCs. They ride as bandits in the wilderness and opponents in the Pitt. They'll jump you while you're harvesting or performing your daily rituals and you'll have no choice but to fight them. Dying in combat is very unpopular and will lose you Importance, while even a grisly victory can be celebrated and gets you closer to that next Rank. 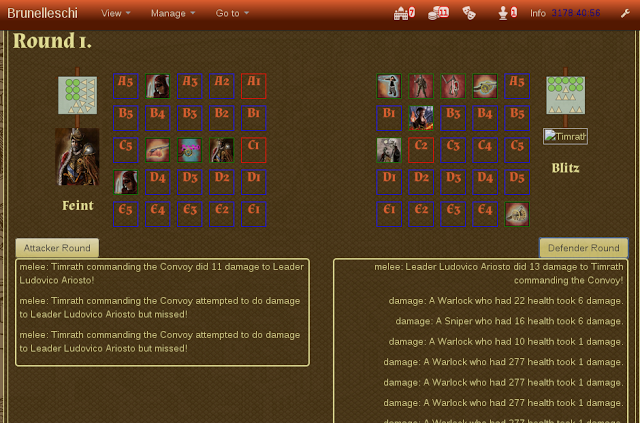 Scenarios
Scenarios come in many shapes and sizes. Some are honorable, some are not. Some are cooperative and friendly, some are not. Many scenarios that support your community and settlement can raise your Importance simply boy contributing to them, even if the scenario is not ultimately completed. Scenarios can also give out Importance to the Winning Circle, that is the top contributors after a Scenario has been completed. This share is likely to be more than a contributing reward but can be hard to achieve in scenarios involving many other players contributing. 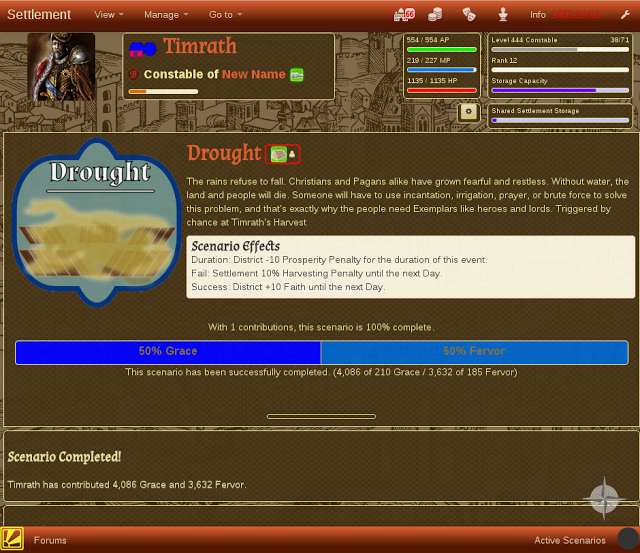 Social ImportanceMost the Importance you'll collect into Ranks will be from friends, neighbors, and random people in the game who decide to like you. After all, isn't rulership just a popularity contest? Other players have constant opportunities to raise (or lower) your Importance by voting on your writings and joining you in player Bonds.

Fealty
The most reliable way to acquire steady Importance is to hook your progression up to that of other players. Every player can pledge fealty to exactly one other player. Then all Importance they gather, a percentage be added to their Liege's Importance as well. This arrangement creates more Importance in the world to share, and does not diminish the Importance earned by the Pledge. This means as long as your Pledges continue to play and gain levels, you will at least a small amount of Importance from them. Clearly, you want to have powerful Pledges who are constantly earning Importance, but the transference goes both ways. If one of your Pledges suddenly loses a lot of Importance, this negative change is passed on the their Liege. Dishonorable action by the pledge reflects badly on their liege-lord. 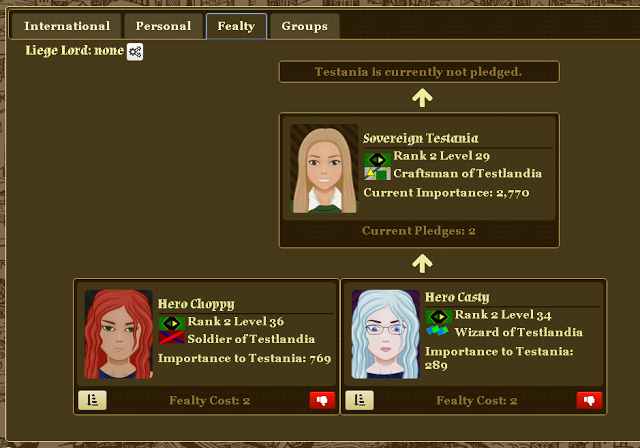 Fealty Points
The limit to this seemingly-infinite font of Importance is how many Pledges you can have. Lord pledges tend to cost a lot more than Heroes, but are better equipped (and usually care more about) gathering Importance. Each Lord's fealty cost is based on their current Rank. On the other hand, Heroes all cost the same small amount of Fealty, despite level or Rank. Therefore a canny Leige can have many powerful heroes sworn to serve them and sharing their Importance.

Sovereign Fealty Concerns
Many Civic System combinations require Ministers to swear Fealty to their Sovereign. This means that Sovereigns ruling under these systems can only hire as many ministers as they can support with fealty points. Since Ministry requires a player of equal Rank to the district, this policy can get pricey and superficially limit the number of Ministers to a Settlement.

Opinions
Players in Brune are encouraged to be opinionated. Every day they get 25 or more points to spend in the forums. Opinions can also be spent on player-made descriptions such as character and settlement bios. These points can be spent rating things up to +5 or -5, but either way the points are spent. With each Opinion spent on your work, your Importance is affected similarly. Activity in the Forums that encourages positive Opinions is the deepest well of regular Importance that can be tapped.

Bias
It should be noted that Opinions are balanced against bias. Voting positively for your friends and neighbors will start weakened. Voting too much for a single person will also start to wan in it's overall effect. Likewise, negatively voting your personal and diplomatic enemies will have less effect than down-voting the post of a close friend, with whom you hardly ever disagree. Voting against your obvious biases causes your opinions to hold much more weight in Importance.

Standing
Opinions also effect the Standing between settlements. This is an overall rating of how Settlement populations feel about each other. The combination of actions and opinions expressed between members of the settlement control the Standing. The Standing controls how positive or negative Diplomacy can be between the settlements. The effect on Standing is also subject to the bias-countering mechanics.

Personal Bonds
The final and overall weakest way to gather Importance is through Personal Bonds. The Spousal bond is created through Marriage and Handfasting and shares Importance between the players. This means that both spouses offer a little of their Importance activity to the other, both positive and negative. Friends, Lovers and characters in the Student/Tutor bond also mutually share Importance. Likewise, the losses of your enemies raise your Importance, and their successes will lower it.