An update on the new 3D models and character customization of Soul Saga.

A while back I hinted at the fact that I was taking Soul Saga into the realm of 3D, and even posted some pictures of it across the various social media sites (Twitter, Facebook, Google+). Well, it cost the rest of my life savings and was difficult working with an unfamiliar media, but they're finally here! Soul Saga's base models are about 90% completed at this point. They've been sent off to the the animator so they can start moving and make it into the game. Later on I will be commissioning someone to re-texture the models to add more variety to the game.

Along with the the new models I've also implemented character customization. The above image shows a small glimpse into the options that customization brings. The plan for Soul Saga is to allow the player to create their own character to adventure into the Soul Saga Universe, rather than just playing from a pre-made hero or heroine. The player can choose their gender, hair style, hair color, eye color, and individual outfit pieces like shirt, gloves, shoes, and hats. I also have plans to allow the player to choose their races from 2 additional species other than human, but we will have to see where my budget stands as my life savings has reached the bottom of the barrel at this point. 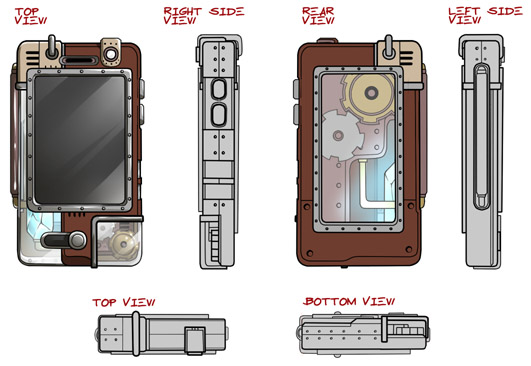 This build also sports the new cellphone the player will be using to interface with the game data. The cellphone will be the way the player accesses their inventory, equipment, skills, messages from and to other characters, and several other functions that will be discussed in later updates. The cellphone sports a fantasy-styled theme with a crystal energy source, big gears, and a bronze casing.

After watching several Kickstarters get funding for their great looking games, I'm inspired to create a Kickstarter for Soul Saga. A successful Kickstarter could allow me to open up the universe so you can travel to more epic places. It would also allow for much more character customization both visually and through story options. I will give more information later this month about the Kickstarter and rewards you can get for backing the project.

Good progress! But for the character customization, most people generally prefer to play as Human.

That's true, I think everyone would be fine with just playing as a human. I'll try not to worry too much about implementing the other races unless I end up with some extra funding for it.

I don't, but then again you did say 'most'

I prefer to play as races other than human as well. That's why I really wanted to bring that option into the game.

of course, main villain looks badass and you only get to play little children..

Hey Donny, I was initially going for a non-chibi look, but it ended up costing way too much to both model and animate more realisitc models in the style I needed for Soul Saga. Going with this chibi style allowed me to afford the models and animations.

In the future I may be able to explore going into the non-chibi art styles.

I definitely will be keeping them for this series. I like them too. =D

Thanks Hisai! Also I meant to +1 your comment, but accidently clicked the minus sign, but it won't let me reverse the accident =( Sorry about that...

cant wait for finishing product in the future *sigh* now to be tortured slowly for months...

I'm really hoping to get a demo out a few months before the game is released to both test the stability of the game and get feedback on gameplay. Hopefully that will help ease the pain of waiting. I will let you know more about this later. =)