Today I spent a majority of the time fixing a game breaking bug in Soul Saga, but then I found an awesome theme song and concept illustrations in my inbox! 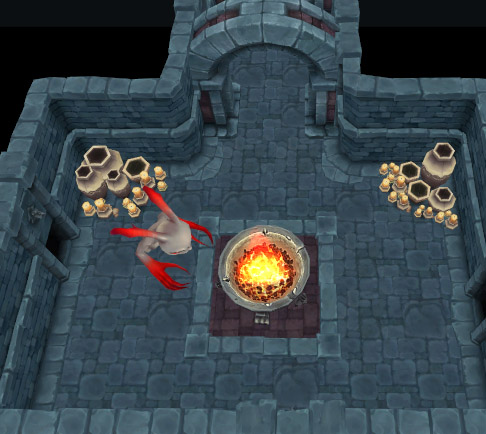 Today I got distracted by a lot of project management things. When I finally got to working on the coding I had planned, I found that the last NGUI update caused a gigantic bug to occur that was breaking the character customization menu in Soul Saga. After trying for quite a while to remedy the situation in a conservative way, I ended up having to just gut the whole character customization UI from the game and rebuild it over again. This consumed the rest of my day, but I completed it successfully.

I received concept art drafts from an art studio I'm working with. These illustrations are going to help depict the story and world of Soul Saga, and they're looking pretty sweet! I wish I could show it early, but I'm stockpiling it up so I can surprise all of you in the Kickstarter. ;)

I also got the Soul Saga theme song draft, and frankly... it's pretty darn awesome. This is another goodie I have to force myself to keep hidden until the Kickstarter. Heck, it's not even finished yet and I want to show you it right now! =D

Tomorrow is my last day of college. After I take my final exams I will rush home and start working on the casting times for enemies. That's right, Soul Saga... it's just me and you from now on!

I am looking forward to hearing the theme song.Thought you were gonna reveal something today as I kept reading (wishful thinking lol! caught myself).Read interview - posted thoughts on facebook. Your dev diaries are inspiring me to be a more dedicated dev after seeing the hours you work and work you're producing.:)

Hey A-Frisque! I'm glad I can help get you inspired. =) I think most of my motivation comes from knowing I'm going to force myself to make a blog post every day, so I want something good to show for it.

And I am sorry I'm not showing off too much new stuff right now. I feel like the Kickstarter should be a big splash for both new and veteran Soul Saga fans. I think you'll like what you see!

I think it's good you're focusing on the Kickstarter- it's a good strategy- a good first impression and something for the followers will help encourage and secure some backing to hopefully reach your goal.

I find it so easy to get sidetracked with all the stuff going on with our game & company -read this and that,follow up on that other thing etc- making a blog post a day a goal of mine might really help me out and keep me focused. I will definitely keep this in mind when our game is ready for its close up with the world at large.

btw Congrats on the degree!:)

Thanks for all the kind words, A-Frique. =D
It's definitely easy to get side tracked, the blog might help with that, but you may have to force yourself to only spend so much time on certain tasks. I hope you do well with your game!

You're right about having to force myself- today is one of those days lol. Thanks for the well wishes. :)

Are you graduating from college or just finished with the current semester?

Hey again, Fib. =) I am graduating with a business degree this week. Well, if I pass my finals today. I've totally neglected my studying for Soul Saga. It's like trying to peel skin off my body when I try to do something other than Soul Saga.