Soul Saga's Dev Diary hits the big 4 - 0! Debuffs and blocking have been implemented! 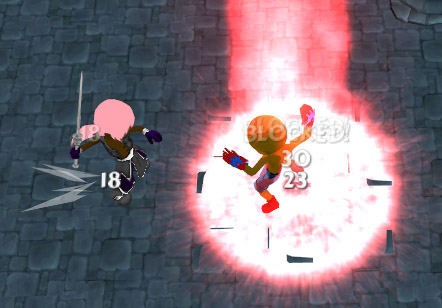 Summary
Today I implemented the debuff system! And man, that was a monster of a task... It forced me to go deep into some Soul Saga code I haven't looked at in the past 250 hours of coding, and I took the opportunity to start polishing it up and planning for expansion to the code when more features are added. I also implemented a blocking system with a shield that can break. I plan to go into deep detail about the game mechanics for these new additions in Update #9. This update should be out within the next 2 days.

Tomorrow
Tomorrow I plan to implement debuff icons to the HUD, officially add the chance for debuffs to be added to the skills, balance the current plethora of skills, and implement other debuff related options to skills such as removing and transferring debuffs. I also want to start implementing some passive skills, such as "Deal X damage to all nearby enemies every 4th basic attack", or "Every 6th skill cast has it's cooldown reduced by 50%".