A status report with new 3D character and grass models to show off!

Newly named, Sprout's Tale seems also to have found new life. Progress is now hurtling along during a rare case of anti-storm that has our entire team receiving relatively easy day-job schedules. It's pretty rare for this to happen, so we're all doing what we can to take advantage of it.
For one, Matt continues to blast through his assignments with such speed as to make them look easy. Though I'm not sure how they could be. Last week I asked him to get started on a system that would paint the terrain with a grass texture as it actually grew grass. Honestly, it was something I wasn't sure he'd actually be able to complete. I figured it might be outside the means of such a small group.

But of course, by now I should know better about Matt. 6 am on Sunday morning my inbox dinged and there it was along with a picture: 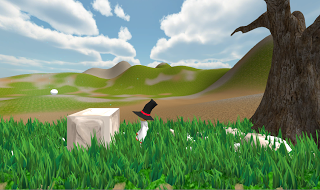 "Current grass implementation has been uploaded to Dropbox. Only level using it right now is test level.
It currently grows 3d grass as well as "paints" a grass texture onto the mesh. Grass density/growth speed/etc. can all be tweaked by selecting the level mesh and modifying the GrassArea script variables. "


I was floored. The picture honestly doesn't do it justice, but I'm afraid you'll just have to wait as I've decided that we probably won't be releasing any more videos until we can edit together a pretty little demo. I don't want to ruin the magic! So for the time being you'll just have to settle for pictures.
And there's a lot to come, so don't worry about that either. Murilo's been hard at work at putting together a proper model for our hero and he managed to get that finished over the weekend. A lot of you have rightfully complaining about the handlessness of the character even since the 2D days, so you'll be pleased to find out he now has a pair of beautifully sculpted hands perfect enough to make George Costanza jealous. 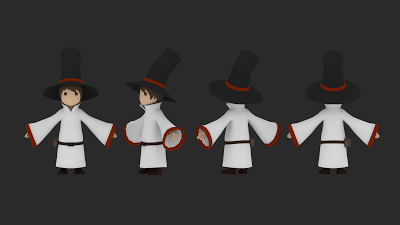 Something something, pun about him being handy.

If you're wondering, our original model was done on a whim several months before we knew we'd be going 3D by @LaconicLelex. It was a rough, twenty minute kind of a thing. When we made the decision to go 3d, he was nice enough to rig it up for us so that we could use it as a placeholder. What a guy.
Well, that about does it for now. I'll try to get a second post out this week if anything happens, but it might not happen. The main news now is that we are getting damn close to having a playable level.
Adios for now.