Post news RSS A little news and some concept art

Talking about some behind the scenes updates and a bit of new concept art.

Only a slight update today. The basics of the engine have been sorted out now, owing in no small part to Unity's great ease of use! This is little bit technical, so those of you who don't know Unity, or just don't care: feel free to skip to the next paragraph!
I'm now using Unity's character controller as the base for the player movement, as it dramatically simplifies the integration of collision with the world, jumping and physics, however I wasn't all too happy with how the character controller felt to play with in its basic form, so I've done some customizing and tweaking with my own scripts and am now really pleased with how it's all turned out! I was going to post a video in this update, however I want to get a little bit more content in the game first, so expect one within the next few weeks hopefully!

Ah, you're back? Good. Anyway, there aren't much in the way of visual updates to show in this post, as the majority of the changes have been behind the scenes, however we have been doing a lot of planning and writing recently, to gear up for finally putting all of the actual game's content in! I'll write a post at some point detailing the format we intend the game to take in terms of story and gameplay, but for now, here's a little bit of new concept art: 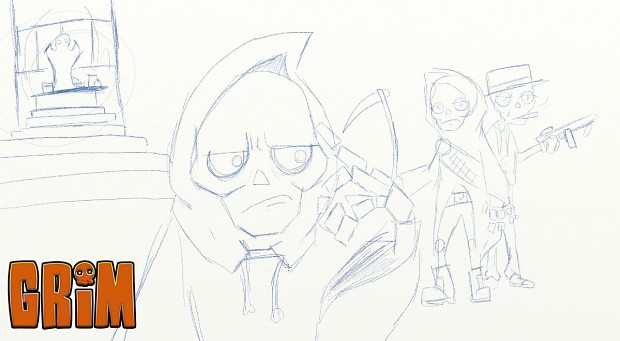 (Full size version can be found under the images tab!)

Just a sneak peak of our new design for Grim, showing the proposed look of his face in the centre, his new, more dynamic looking cloak/uniform next on the right, along with a much smarter outfit, possibly for dining with certain Italian Businessmen...

That's all for now, next update should contain a little more in the way of visual content!