Starving to Death is one of those hilarious risks that comes along with playing a game like Brunelleschi. This may sound ridiculous. You're thinking 'This is a web game. It can't possibly be so serious as to have starvation built right into the mechanics'. Wrong, we say! Food is a major part of a) Life, b) the Renaissance and c) Gameplay in Brunelleschi.

While the previous post on Eating and Nutrition outlined the available bonuses Players can gain by choosing to eat food-items, there's a dark underside. After Lvl 50, your characters lose their noob-protection and begin to lose health with every meal-cycle that they do not eat *something*. However, what they eat doesn't really matter. There are many options for food-items and most are cheap and easy to acquire. Before Lvl 150, wilderness actions will be sufficient to provide you with basic sustenance. After that, players will have to rely on district actions and the market to provide their foodstuffs. 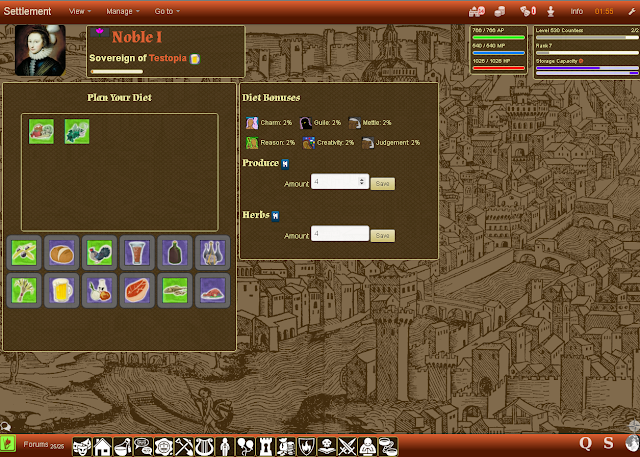 Easy foods include Grain, Herbs, Produce, Fish, Mollusks, Oysters, Game, Livestock and Fledglings. These can be gained with basic Wilderness and early District actions. Higher value, and thus more challenging to acquire foods include Meat, Fillets, Bread, Groceries, Beer, Wine, Grapes, Olives, Oil, and Tinctures. These either must be processed through buildings or gathered from higher ranking districts/buildings. Some classes eventually get special actions that may provide foodstuffs, such as the Ritual of Plenty for casters.

So You Starved Anyway...

Maybe you didn't know about starvation. More likely, you just wandered away from your character and forgot they'd eventually need more food added to their storage. This happens to me (the primary tester) all the time. I come back from a week of other tasks to find a whole batch of dead test characters. What to do? You have two options. The first is easy. Click your portrait, take the Death Point and come back to life on the cheap. Non-Hardcore characters will feel a little fuzzy after this return from the dead, but the effects will fade relatively quickly and you can return to normal play. Hardcore characters of course must live with this death point forever, building to their eventual final death, but get to skip the negative effects. Alternately, you can find a Secondary Clergy character above Lvl 200 who can perform the Resurrection action. This will bring you back to life without a death point or that post-death malaise, but it costs them precious action and magic points. Be ready to pay whatever your healer requires.

How To Not Starve Again

There are a couple good ways to make sure your character's belly stays survivable full, if you remember to plan ahead. Brune already includes 'inactive' and 'vacation' states for your character, in order to stave off any and all negative effects that come from leaving your game un-played for a specified amount of time. On the other hand, if you don't want to worry about it, or pay Platinum for vacation mode, or just plain can't predict when you'll be able to play, you can always stock up on Grain. Leave your character's inventory full to overflowing with some cheap foodstuff. Sell it off if you need room for other stuff and let your character eat from 'the pantry' until you come back. Just keep apprised of how quickly they eat, and how many days of food you have stored. It only takes a few clicks to refill your storage with Grain, so keeping your character alive may only take two minutes every week or so. 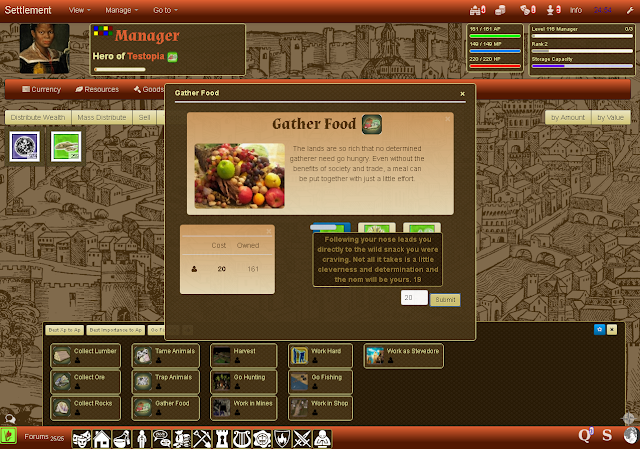