As you may have noticed, Cry of Fear does no longer work due to the Half-Life engine update Valve released to give support to Linux users. We got in contact with Valve, and they tried to fix the issues.

We will try and focus all we can now in order to get the stand alone version up and running. It will basically be a better version than the original Cry of Fear, and it will contain the biggest change list ever. It will be known as v1.6.

Old news below this line 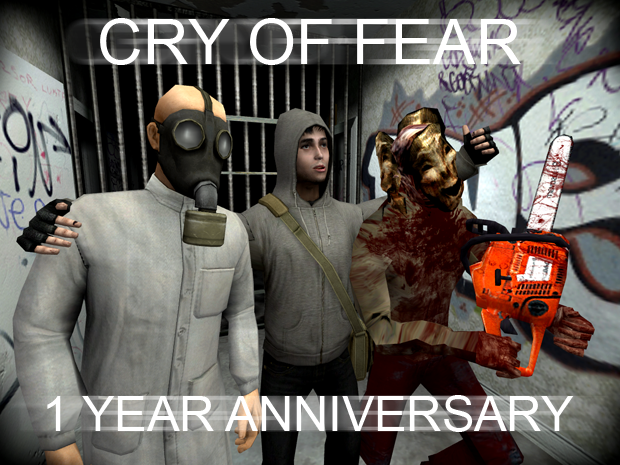 Today it's been one year since Cry of Fear got released. We've seen awesome feedback from the community and players, and it's been a huge success. Our goal with the anniversary was to reach a half million downloads (on ModDB), and indeed we did reach that with currently 506,344 downloads.

Thank you all who have played Cry of Fear and shared it around. It's really nice to see as a developer.

As you may have noticed, Cry of Fear is not in a good shape anymore, since Valve have released an engine update to Half-Life, which have broken many Half-Life mods, including Cry of Fear. It's up to Valve to fix these issues. I've made a list in our forums that we send to Valve ourselves. So far they have fixed one issue. Please help us report bugs here: Cry-of-fear.com

Many people are waiting on the Steam release (Cry of Fear Stand Alone), which indeed is cool, BUT! The release will take a little bit longer. As I said before, we wanted to release it today, but due to the engine update that Valve have released, it's made us focus on the mod rather than the game, since we want people to be able to play CoF while they wait. After Valve have fixed the engine, we will then take their changes, which will make the process take a little longer. James (Minuit) is the guy responsible for the release. If you have any questions, ask him. 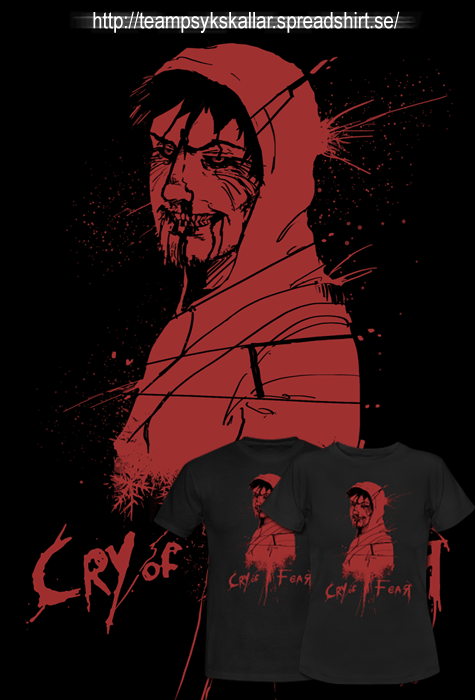 There are some new designs up in the clothes store, check it out.
Art by Peter Mason Aka UNiCOMICS. His website: Unicomics.tumblr.com

You can also find a lot of other cool clothes there, such as the popular Simon's Hoodie.
Here's the store: Teampsykskallar.spreadshirt.se

As you might know, Cry of Fear have two soundtracks that you can find down below. 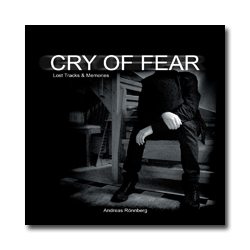 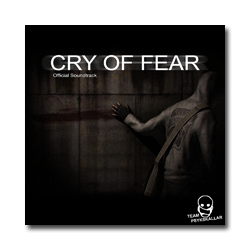 Here's one of the new songs in Lost Tracks & Memories album.

For you who have not yet tried Cry of Fear, please download it from here down below. We recommend you follow this guide if you are not sure how to install Cry of Fear: Cry-of-fear.com

Anyways, see you out there, and hopefully you will cry of fear.
/Team Psykskallar
Comments

Can we expect the stand alone release next week or so? I've been itching to play it badly for...over a month now.

Can't wait to see the improvements, too, especially the inventory screen.

"The longer it takes, the better it gets"

Don't rush them, my friend. Let them do their job as usual, they won't dissapoint you!

I know, but most of the new additions and improvements are finished they said, it can't take much longer :P Blame valve for my impatience >.<

They said it would be released sometime this month.

Awesome. We should play coop sometime, devs. You can hear me scream into the mic like a bitch.

**** yea I almost thought Cry of fear was dead for a few days now :/ As usual best of luck you guys are better off without Valve ... they break just about everything these days with no regard for the modding community.

It's a real shame that they have fallen so far tho ... you know seeing as they were one of the few companies that used to support mods.

Ah come on they aren't that bad, EA offered Gabe Newel 1 billion $ for Valve, Gave gave them the middle finger :P and just imagine if he accepted, they would turn Ep 3 into Carl of Dunky with day 1 DLC, oh and to see the real ending you would have to buy a 9.99% DLC for the last chapter of the game, who knows what else? My point is is that not every video game company rejects 1 billion $ :P

Someone should have suit them already rather then waiting worthless time for it. Because, they're nothing more like Google only wanted to earning more money by ruling our life. Anyway, It is just sad, that this such wonderful project being dead all because of those morons have did it to you. Hopefully, you can announced something in the future. Good Luck.

How could anyone possibly sue them for this?

Why the hell would someone wants to sue them just because of some bugs from a game?

This is what a true warrior strive for

Wasn't there a comic or something that was announced a few weeks before the mod itself came out? What happen to that?

This mod should have been stand-alone right at the very beginning.

But I glad finally you guys are on to it, since Valve cannot fix the modding else that changed HL forever.

Why are people still blaming Valve for this? The only mods that are broken are the ones that use heavily modified versions of the engine.

Someone please explain why Valve should have to do anything about that? Fix your own broken *** engine!

Hope they finish soon, but i could wait little longer take ur time making the game even better.

So... it will only be a Steam release? Or it will be on ModDB (please) too?

im trying to verify the files but it dosent work

I'm really psyched for a stand-alone version of Cry of Fear.
I've been wanting to play it forever and now when I finally have the chance, it doesn't work anymore!
Hope the stand alone comes out soon!