Reworking animations and fixing the UI. The work continues and the game gets prettier!

I know it's been awhile since I've done a proper update. Part of that is losing momentum. But fear not, Four Realms is still in development and momentum is picking back up!

A lot of time has been spent working on animations. It's a bit time consuming and a tad frustrating because forward momentum feels small. But when they come in, they definitely have a subtle yet strong effect on presentation. Right now I'm sitting at about 25% of the animation rework done.

I took this week to do some not animation related work. This time I focused on two things. Improved health bars and a minimap.

The health bars now no longer pop around and are shown in chunks. I love the chunks! Seriously, they really make it easier to see how much damage was done. I'll probably use them for all games in the future.

The minimap was a much requested feature from the first demo. It's taken some finagling, but I think I've got it working pretty well. It does an excellent job presenting the layout. 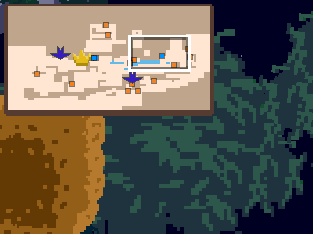 So when can you expect more awesome stuff for Four Realms? Right now I'm planning a major new demo release in about four months. Yes, I could do some smaller ones incrementally, but I feel it will work better if there is one release with all the new animations and that is my current estimate. This will give me a chance to really polish it up and knock your socks off. It's gonna look good!

After that I'm going to do some more regular updates as I work towards Beta and final release.

Thanks for reading! All questions and suggestions are welcome!