Post news RSS Sir, there are catechumens in my soup.

- Something under my bed took my girlfriend last night! What I should do? - Pray for her soul.

I promise, the next week I will do a video, or anything technical, about the pixels and graphic design or whatever, but today I will talk about the Catechesis.

Venga Chico, ánimo! This is a really interesting subject to talk, and maybe the readers can know some secrets of the game.... I don't think so, but who knows.

The true is I loved the word "Catequesis" since a long time before the game, so when I talked to Mr. Max to make together a survival horror I knew the name had to be this, and when I had to structure my story I read about Catechism and I found some interesting things. First of all, in the ancient times, the word Catechesis hadn't exactly the same meaning.
Chico: zZz... Had the ancient Catechesis big creatures from the sea or dinosaur zombies?

Yes of course, plenty of them... well, the meaning of the word has not really change in the fundamental sense. Catechesis: (From greek κατηχισμός, “instruct”) Is an education in the faith which includes especially the teaching of doctrine imparted, generally speaking, in an organic and systematic way, with a view to initiating the hearers into the fullness of religious life.

But the big changes were in the phases of this instruct. For example, now the people are baptised when they are babies, but in the old times people were converted to christianism several times when they were adult. 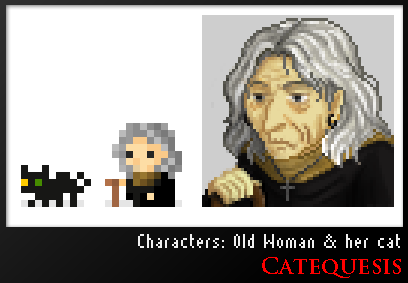 Chico: What the f*ck! I have to admit that with all these weird names and rituals this can looks really amazing for... japanese people, for example.

Yes, and for me. Transform this phases in chapters and mix them with horror concepts, you got a story.