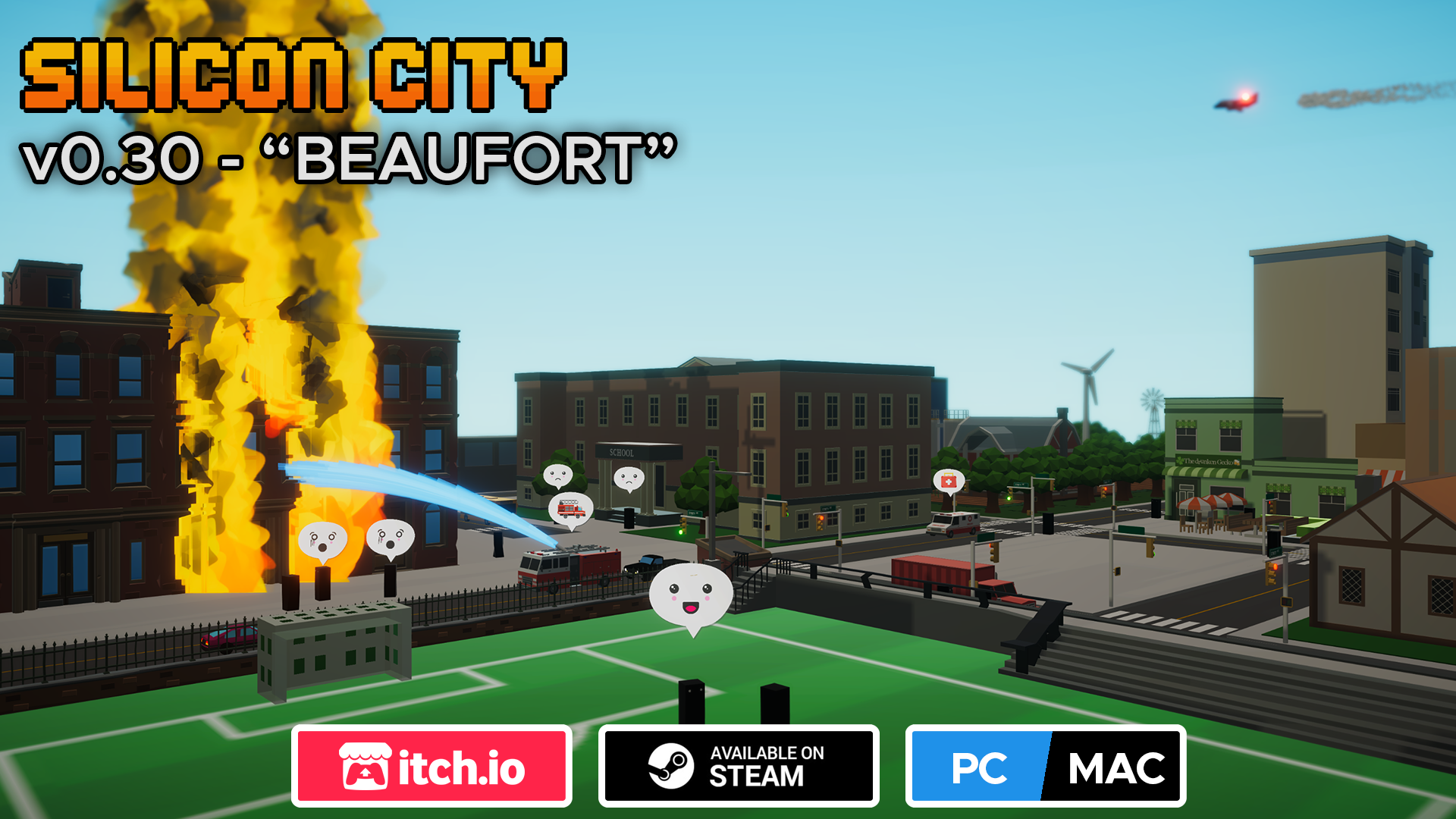 One step closer to the official early access of the game ! After a quiet beginning of 2021, we’re back with new features and content. This version 0.30, codename Beaufort, focus on visual effects, rendering and performances.

We need you to make Silicon City more popular to the world. Share the news around: add the game to your Steam wishlist (click on the banner below). Follow us on social networks, retweet or share posts and spread the word.

Each contribution matters and gives us more visibility, so we have more resources to finish the game this year. Without you there wouldn’t be Silicon City. Thank you!

NEW WORKERS ARE IN TOWN!

Our beloved Silizens finally got two eyes to see the world around them. Some of them have a distinctive sign that let us know which job they have. For now, only 4 jobs are involved but the next ones will come later in future updates.

They can also express themselves now through bubble representing their emotions. Zoom in and browse your city to discover their daily routines.

We added two new camera modes to make the game a little bit more retro. Whether you’re a fan of the city builders from the 80s, the 90s or the 00s, you’ll find a style that suits you!

Protip: the default camera is a pivot camera (view from the sky). You can switch it to an FPS camera (1st person view) if you want to take advanced screenshots.

Still with the idea of giving you more creative tools, we added a miniature effect (tilt-shift). You can set this on or off, or the strength of the effect in the Settings menu.

We finished a new building for one of our backers. It is only available in the sandbox mode for now but it now became the largest structure of Silicon City. Apparently it helps you Silizens celebrating new years!

We’re still working on an new user interface. It will be ready for april, we’ll release pictures of it soon. It will be more flexible, more complete for a complex city builder such as Silicon City and adapted to large resolutions.

Other hot topics are in the oven as well: procedural construction for our buildings for infinite 3D models, a new version of traffic management, online ranked weekly challenges and a new extended tutorial. We’ll get back to you on Discord or on social networks each week.

A MILLION THANKS TO…

We wanted to thanks the streamers and bloggers who are talking about us and the game. A special thanks this week to TWord who wrote this article about Silicon City.

TWord is a blogger who collects retro consoles and games. He shares with everyone pictures of his collection and writes articles about other independent video games. Go check his website and his Instagram profile: @thetword90

Thanks to your feedback, we were able to identify bugs, so we could fix them and improve the game even more (Paren, Yarso)