In this update we continue to focus on refining the strategic experience, work on the reported issues, inject new ships and modules and put in the scaffolding for the new ‘Combat Simulator’ which will allow you to test your ship designs. We’ve also added two new ships and the ability activated XL weapons, a total of 70+ additions.

In this update we continue to focus on refining the strategic experience, work on the reported issues, inject new ships and modules and put in the scaffolding for the new ‘Combat Simulator’ which will allow you to test your ship designs. We’ve also added two new ships and the ability activated XL weapons, a total of 70+ additions.

But the majority of the work has been under the hood, thinning out the loading process and putting in some optimisations to facilitate the addition of things like multiplayer and modding.

A notable inclusion to the list of available modules are the new ‘Shield Modules’ which can now be fitted to a special slot on any ship. The modules can either extend the amount of hit points a ship has or can offer damage resistances. In keeping with the insane customisation options we have planned the modules also change the look and feel of the shields, hover over the icon in the ship configuration screen for a preview and you can also click on the ship to test them. 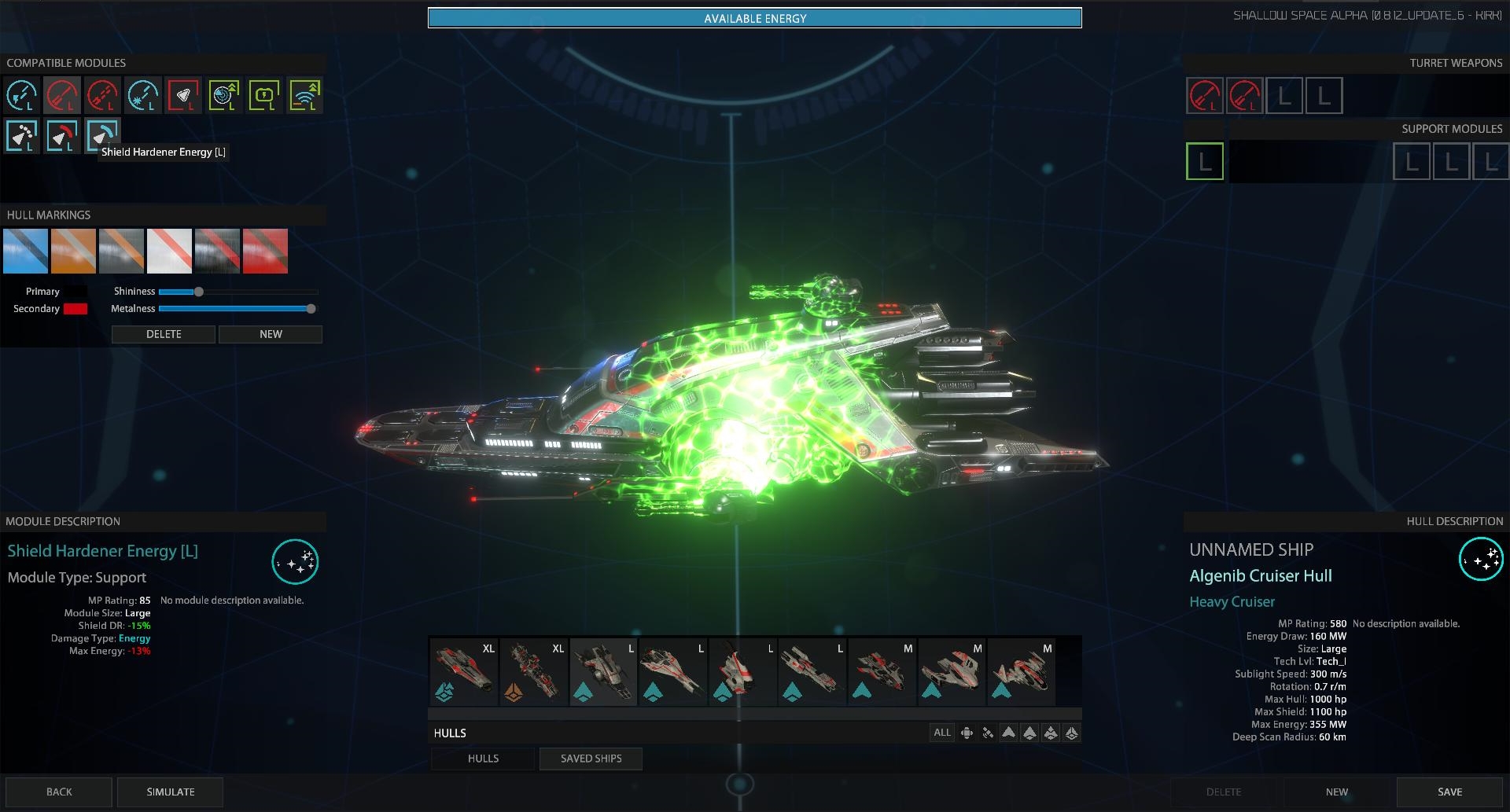 Showing off some new shield effects, try clicking the ship to preview

the visible effect on the ship a module will have.

As well as having the skirmish missions to hone your skills, we have also included a special map accessible via the ship configuration screen that will allow you to test your ships. At the moment you’ll face a ‘mirrored’ set of ships with randomised weapon load-outs which is actually pretty tricky.

In the end the combat simulator will have a number of customisation options like the ability to set a randomised opponent to a predetermined base MP count (10K, 15K, 20K etc.) and number of Flotillas so you’ll be able to knock together some pretty insane battles and in the background it’ll really allow us to perfect the AI’s behaviour. Awesomeness all round. 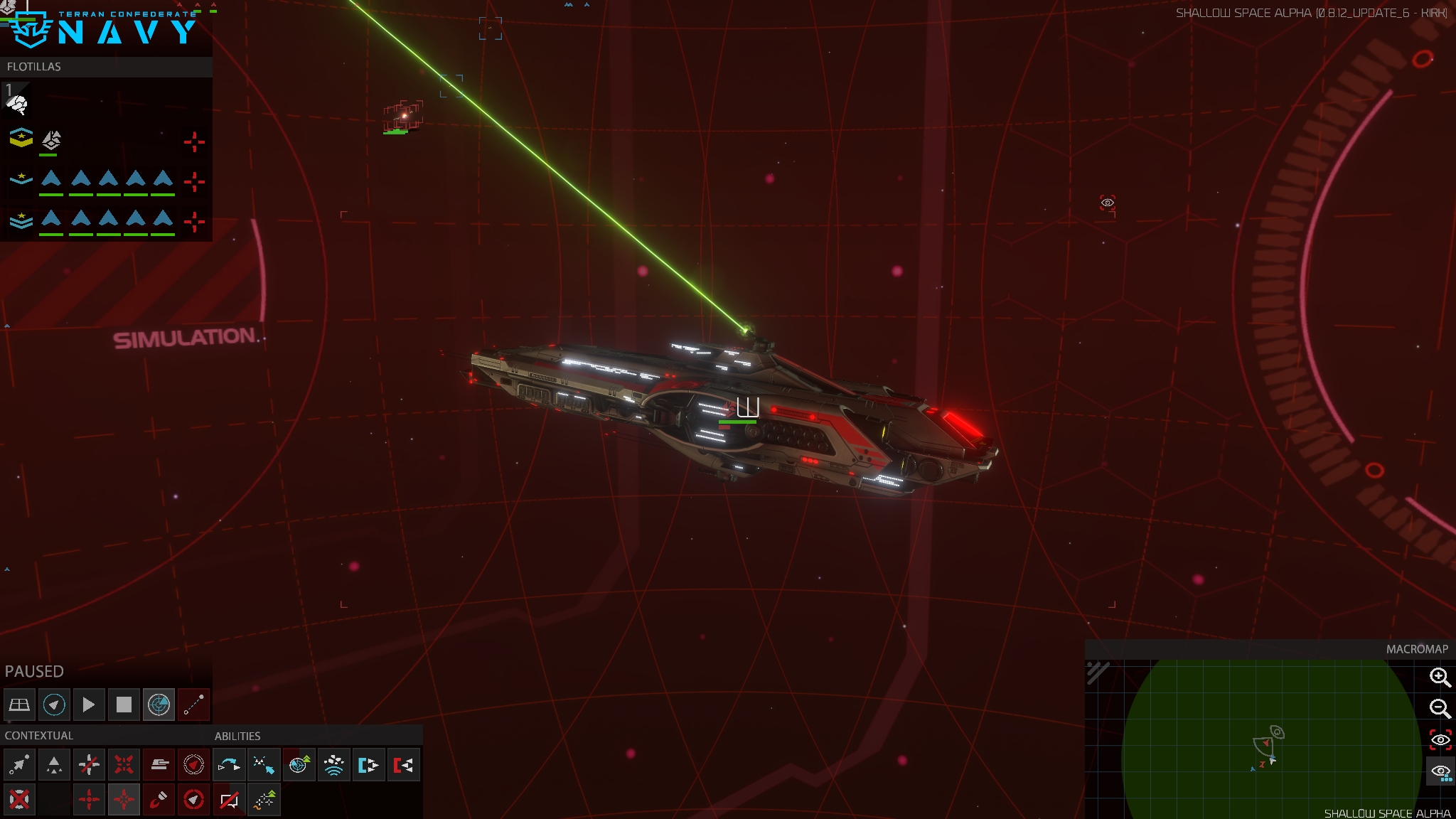 So we include the first type of special weapon slot which is attached to one of the new ships, the Homan. To use them the ship will need a target (either using auto attack or manually right clicking on a ship) then select the ‘Activate Special Weapon’ ability button. The ship will then move into the required range and start to open fire.

The guns are overpowered at the moment as they will continue firing until the target is destroyed so a wing of 3 Homans will annihilate a Nottingham Battleship pretty quickly, we’ll be restricting the ability with the usual cooldown periods in a future update. 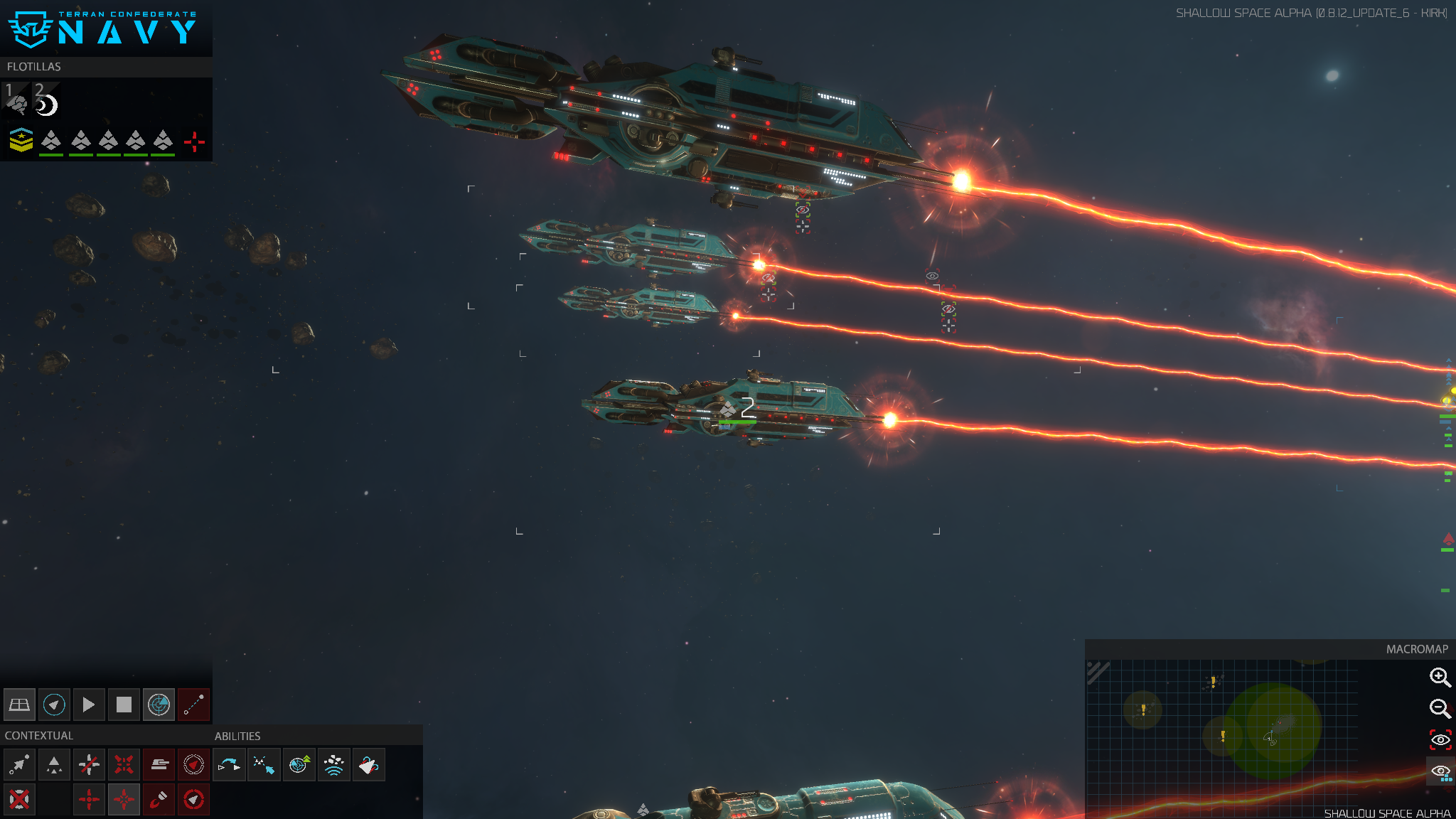 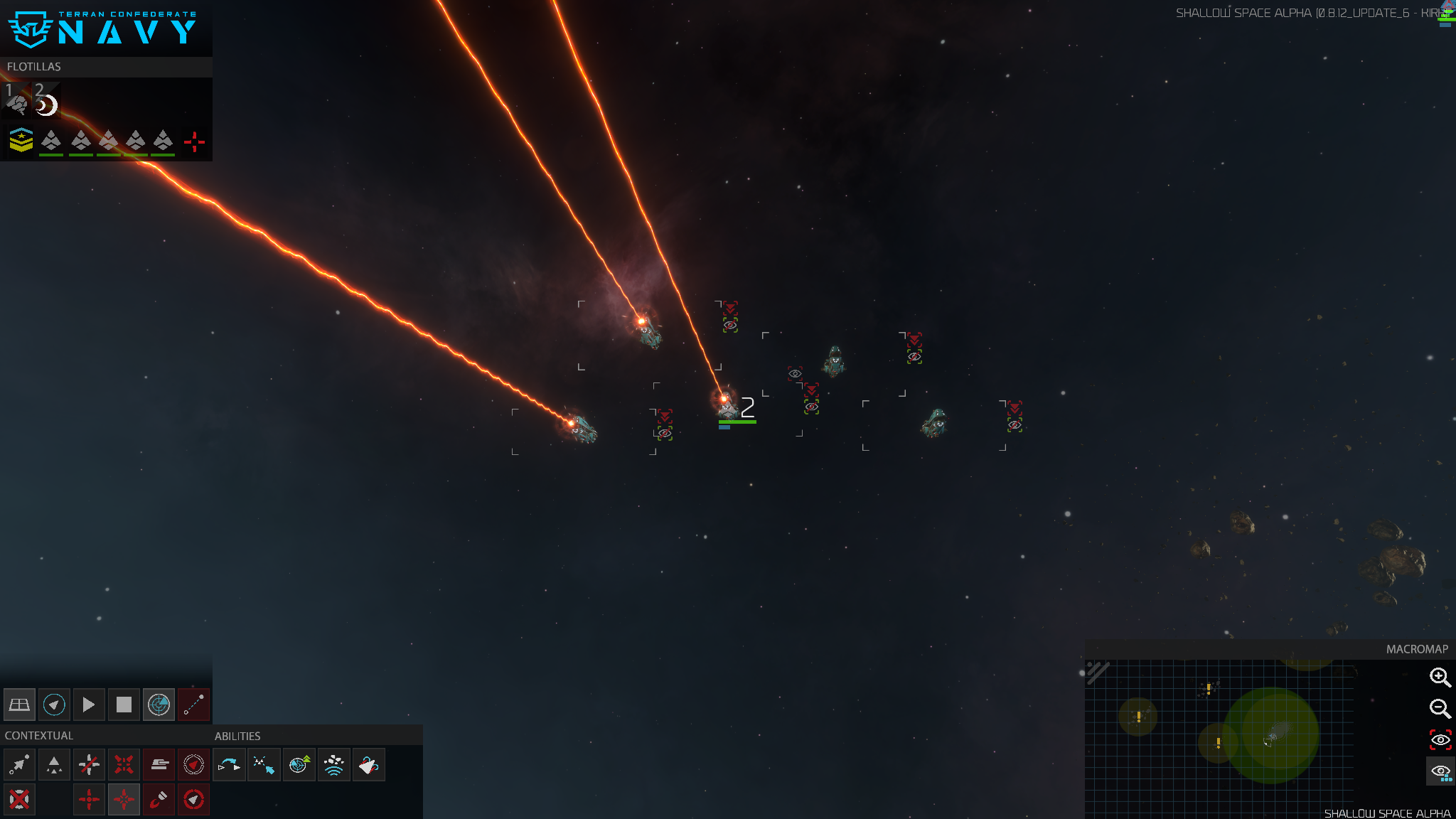 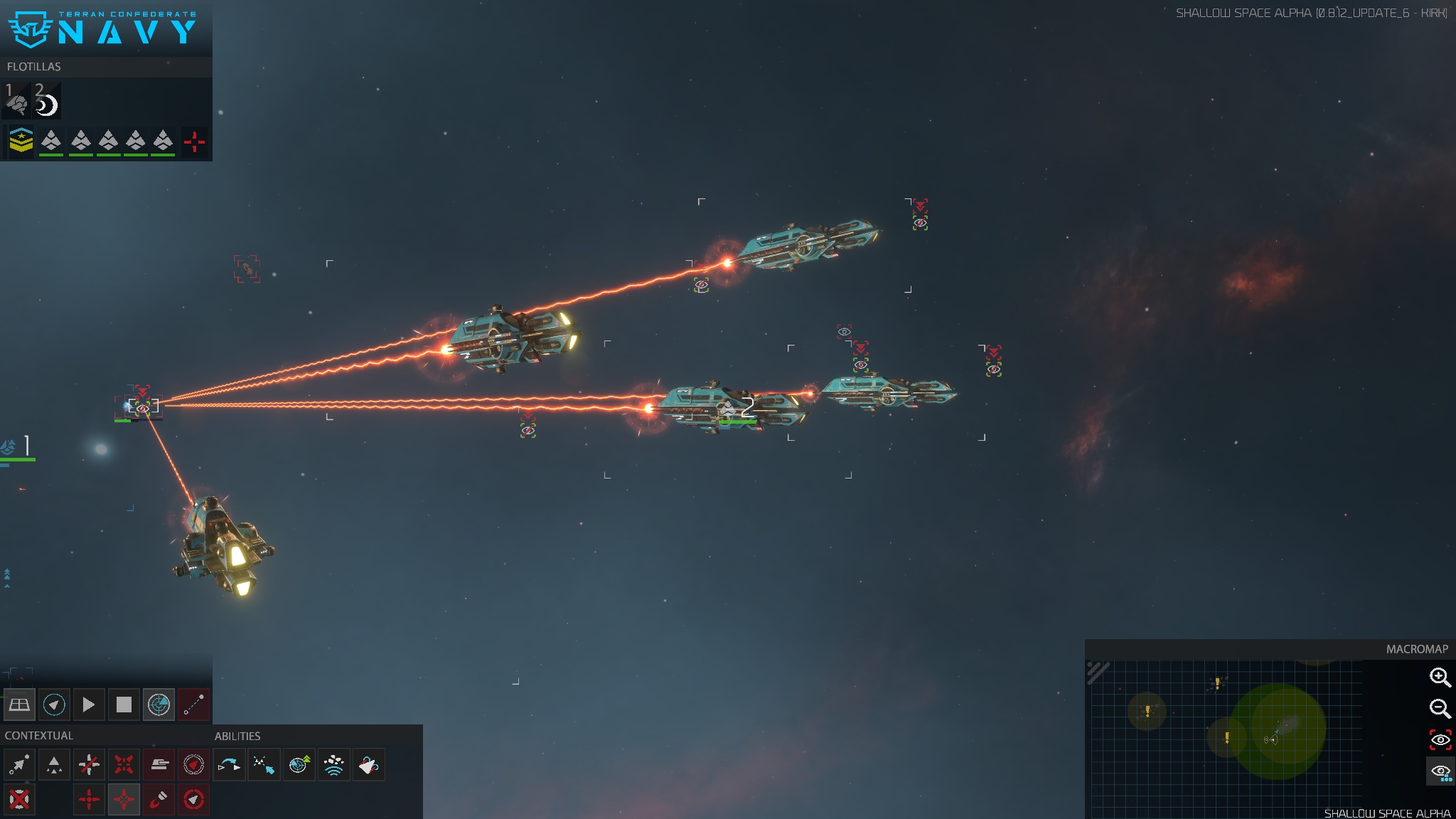 Special weapons will start to give you additional strategic options and make destroying the enemy more fun than simply right clicking on them and watching them duel. For example, the Homan, although has a formidable weapon, will be overcome pretty quickly in a toe-to-toe battle with a Capital ship. So it’s best to distract the target and jump in behind and let rip.

UPDATE 7 will focus on giving you more scope with a new indirect fire weapon system (missiles,) a new Battlecruiser to shoot those missiles; the MFC ‘Blackbird’ and we’ll also be widening the Combat Simulator with configurable options as discussed and adding a few additional maps and modules.

As usual see here for the comprehensive patch notes, we hope you enjoy playing UPDATE 6!