Update 5 is out! Saving and loading fleets, objectives system, a new ship and many more fixes, changes and additions. Also, more of the Armstrong cruiser.

UPDATE 5 is here, again more evolutionary progress rather than revolutionary with the bulk of the work having gone on in the background to allow for the saving and loading of fleets. We’ve further diversified the scope of active abilities allowing them to affect areas of the map in the same way as statuses given by asteroid clusters and gaseous clouds, but application is contextual (affecting allies or enemies) depending on whether the ability is offensive or defensive. 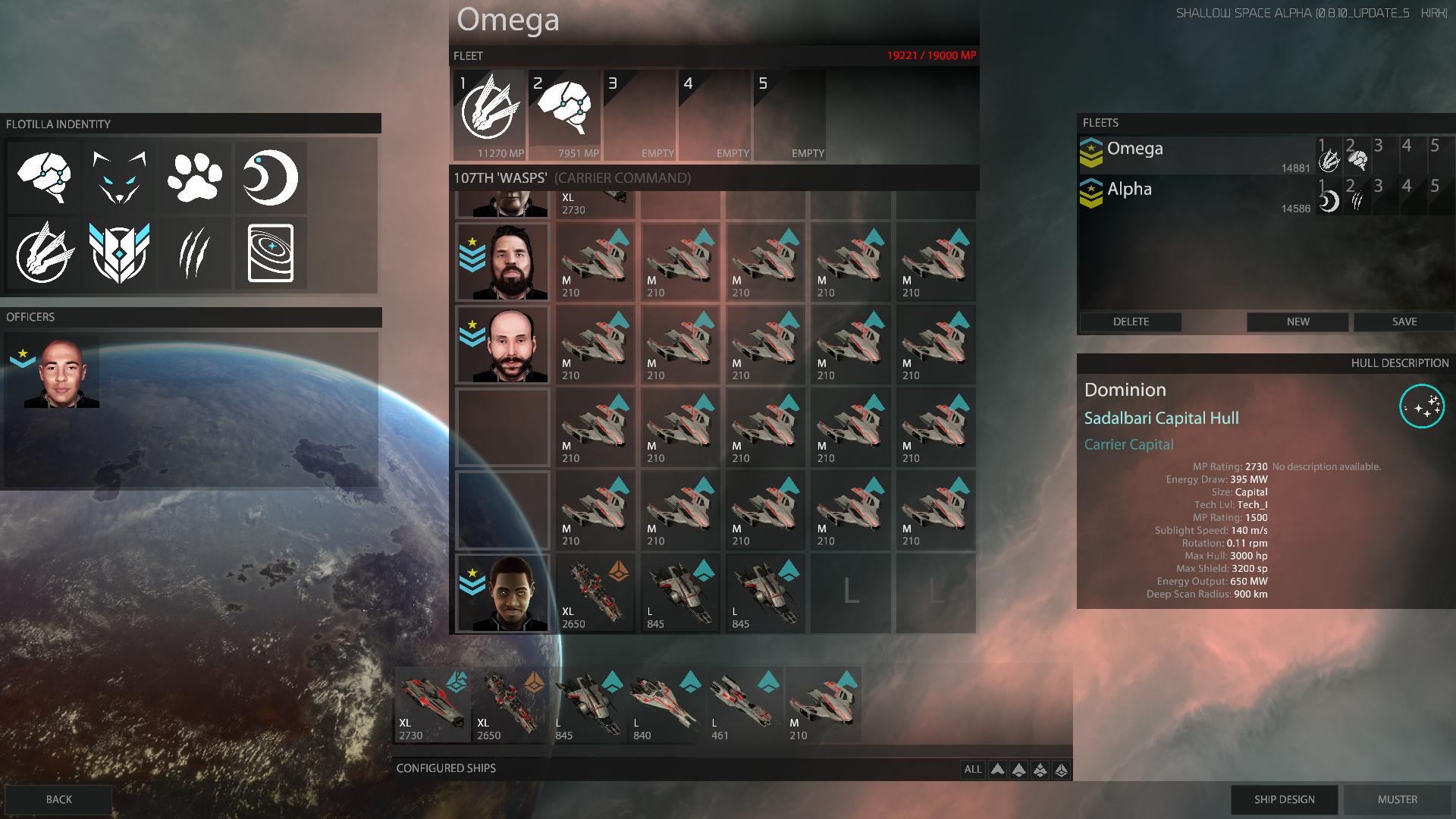 The ability to save and load fleets we’re sure will be a welcome addition to the Fleet Config screen and we’ve reworked the innards to make the behaviour much more consistent.

We heard the pleas from the new players eager to dive in and play without having to configure the fleets so we added a couple of default fleets and really nailed down the holes in the background that can lead to inconsistent gamestates. The game is in alpha state so some of the reverse actions (removing ships or officers from the slots) might previously have given way to a crash or some peculiar behaviour in tactical, many of those issues have now been worked out.

The Objectives system sees some natural evolution with some additional mission types, status of mission (completed, failed, open) and the ability for objectives to become hidden until the perpetrator is revealed. We look forward to extending that system even more with chained objectives and objectives linked to additional activities such as building, resource collecting and movement. The objectives system begins to take root elsewhere in the game with active quests being notable in applicable tooltips. 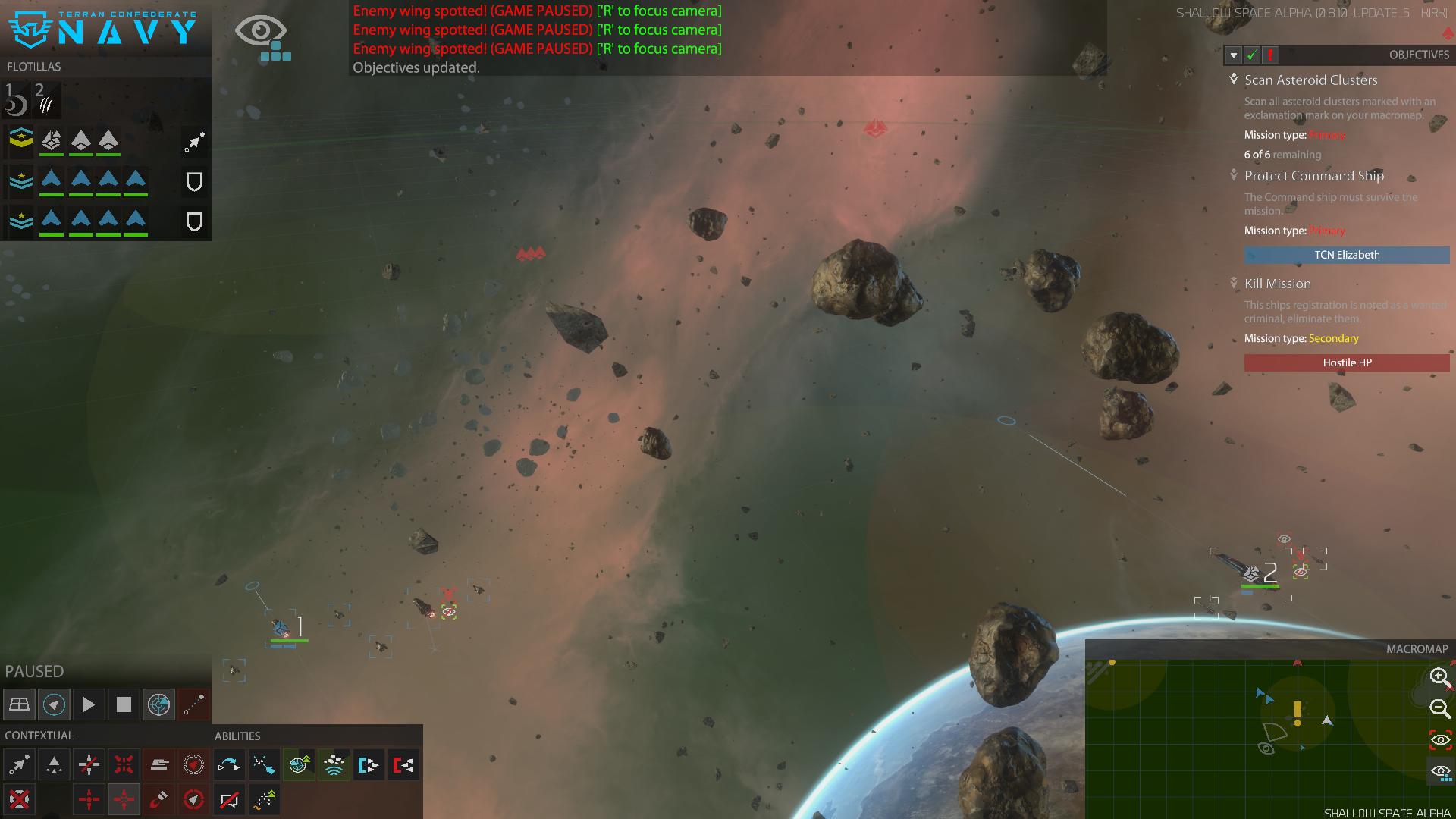 Objective system sees natural progression in this update, more toys to play with there on the abilities bar. Two abilities are active, with the green radial countdowns indicating they are live and giving hints to the remaining duration.

Still in tactical, we start to see a small sample of the multitude of planned abilities surface with the addition of 5 new active abilities. We’ve added visual feedback to the activation of those abilities and have a series of new ability activation callouts for our voice actors to make up in the near future. Mouseover the abilities to get the blue range delimiting sphere which will show you the area of influence. Some tweaks to the way the icons work should make it a little clearer as to the status of that ability, be it active (with the green radial countdown) or in cooldown (with the red radial countdown) the tooltip has also been amended to make things a little clearer.

Also arriving in UPDATE 5 is the Algenib Heavy Cruiser and 3 additional weapons for you to play with! Also, we’ve responded too much of the player feedback that has come in and rolled in the appropriate fixes and tweaks. 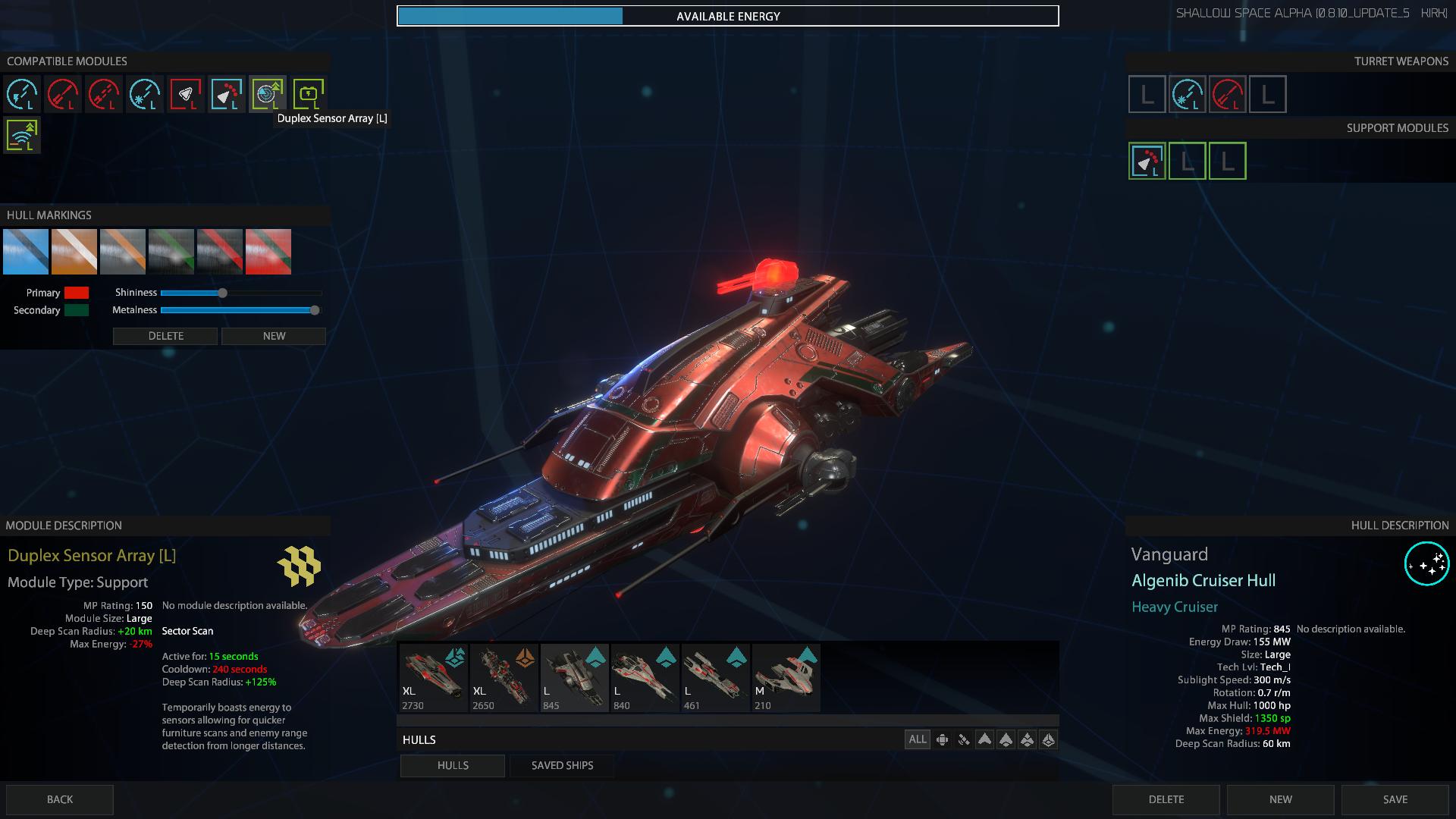 The Algenib Heavy Cruiser is depicted in this screenshot with the ‘Duplex Sensor Array’ module highlighted displaying its inherent abilities. The addition of scrollbars to the hull/ship lists should make it easily to manage more configurations.

UPDATE 5 is live on Steam now and will be made available to the Humble portal in the next few days. Here is a link to the complete patch notes.

Furthermore, the INC Armstrong modular Cruiser has been been getting a Missile Side as well as Cargo Side. You can preview the entire Cruiser so far in 3D here:

Look forward to UPDATE 6 which we envisage will include new ships, modules and abilities. The weapon damage system will be overhauled dropping the separate ‘Shield Damage’ and ‘Hull Damage’ values for each weapon and giving rise instead to elemental proficiencies and with that the ability to install passive damage resistance modules and different types of shields. Also we begin work on the ‘Active Scenery’ system which will plonk you even further in the seat of the Battlegroup Commander.