Just one week after the Early Access Release, a massive update has landed.

We collated all the community feedback over the course of the last week and turned them into magical fixes; 30 of them to be precise and we also managed to advance the timetable functionality-wise by adding in a sprinkling of additional content. This content is designed to advance the objectives and abilities systems which will become key to the tactical experience as the title evolves.

The main change in this update which directly affects gameplay is the requirement to scan a piece of sector furniture to know its contents. Any ship in the game can use the ‘Deep Scan’ ability to advance the scanning of an asteroid cluster or gas cloud by ensuring the position of the formation is such that the centre of the cloud is enveloped in the scan radius (easiest done with the 3D range delimiting spheres shown.)

If you increase the range of the ships deep scan zone using scanner modules, or activate the scanner enhancing ability ‘Sector Scan’ these effects will stack allowing you to bring more stuff into your scan radius and scan it quicker. The more ships you have, the quicker scans will be resolved also. 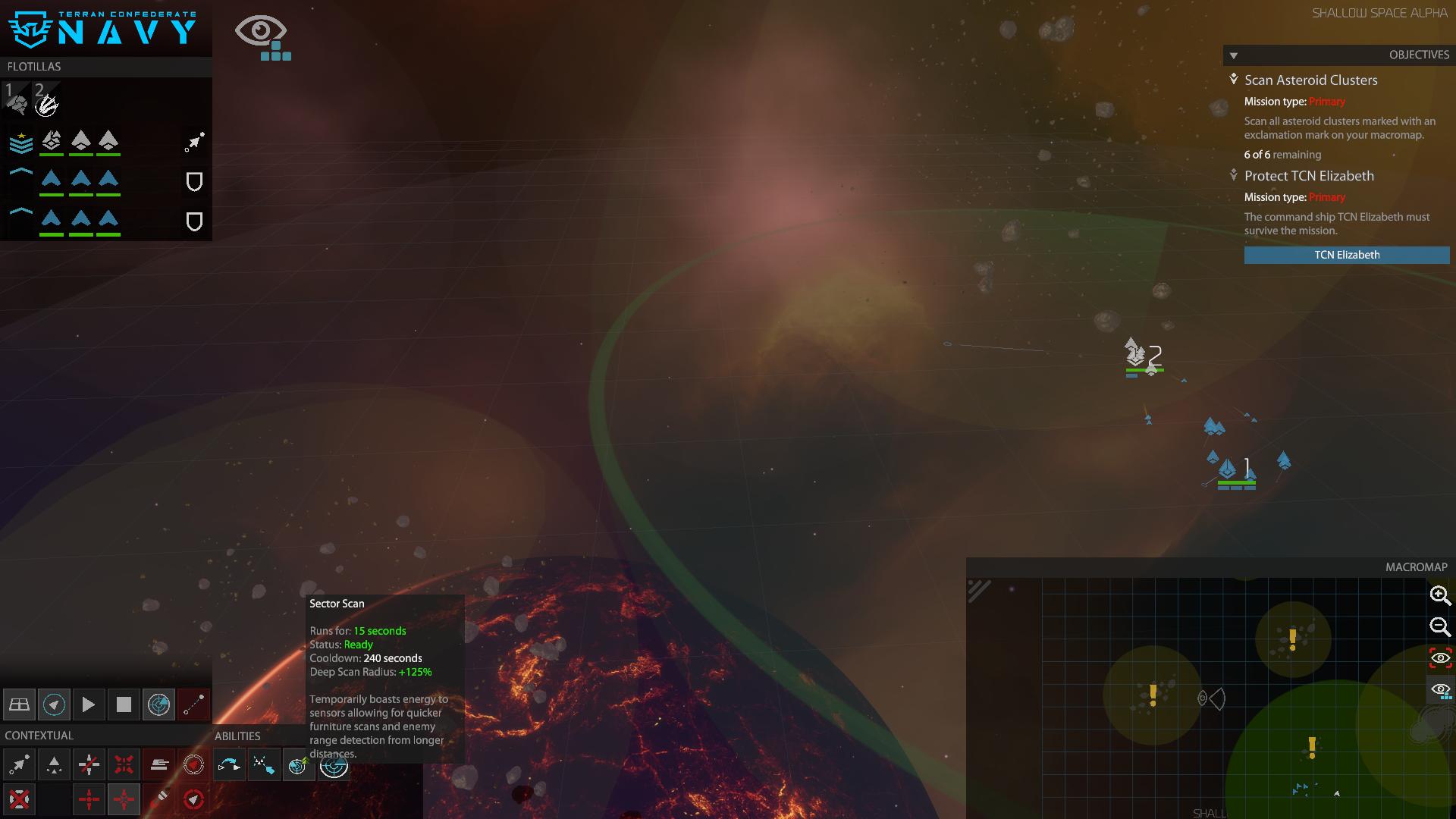 Shown in this screenshot is the Blue delimiting range sphere, this particular sphere is context sensitive showing potential range extensions for abilities or status effects emanating from your units.

So it has to be said that you really should scan sector furniture before entering it because if the enemy manages to attack you when they are concealed, you’ll get hit with the ‘Surprised’ status preventing your ships from firing or jumping for 15 seconds which is bad. That door swings both ways however, and fishing the enemy out of their comfy hidey hole and into your waiting ambush might be a valid tactic for you. We will of course be designing maps to ensure both sides are caught out by that cool mechanic.

The minimap is key as you fly your flotillas around scanning stuff and it’ll tell you how far along the scans you are by hovering over the nebula or asteroid icons. The higher the scanned percentage, the less likely you are to get surprised attacked if there is something lurking in the depths. 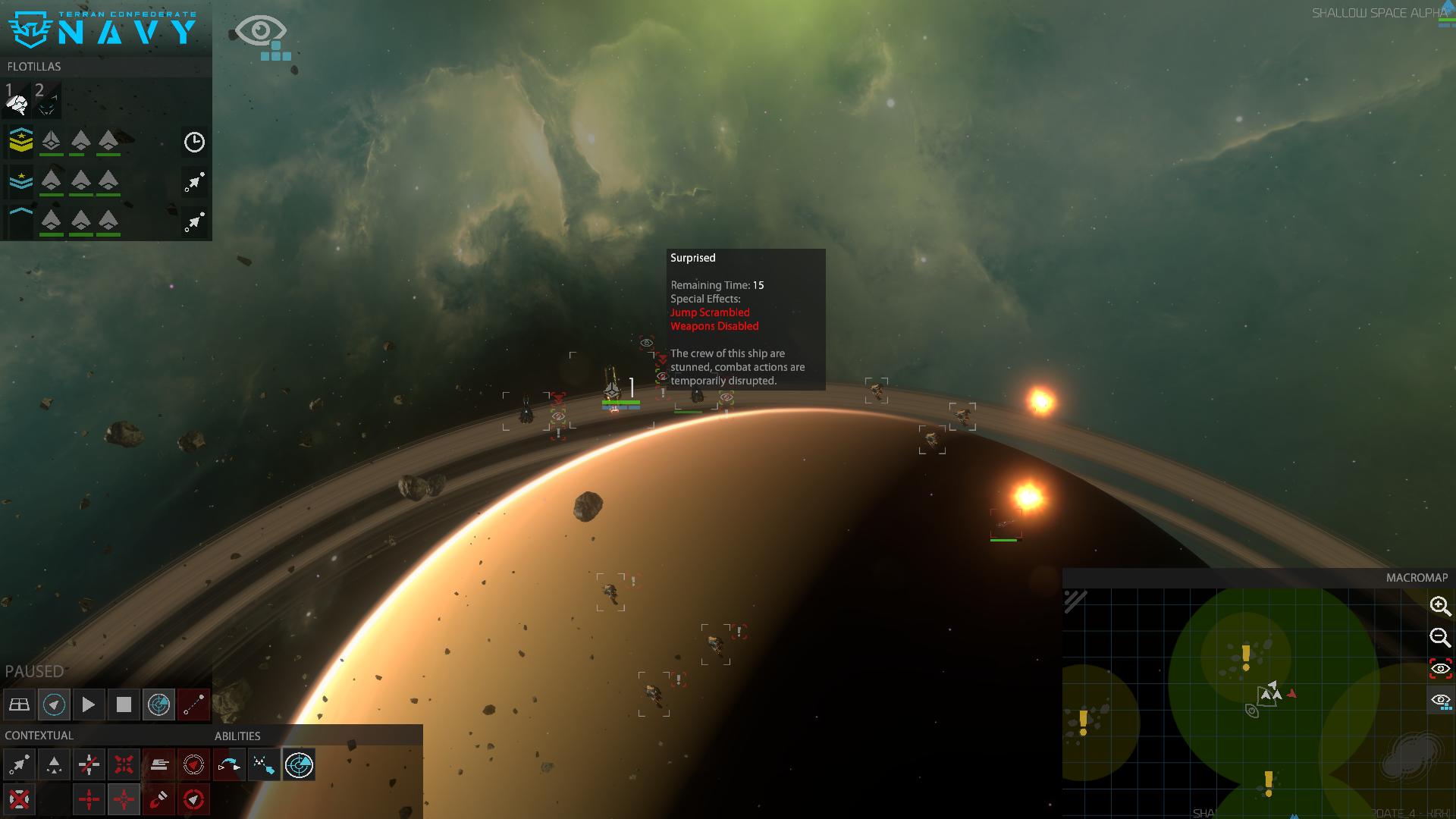 This wing flew into an asteroid cluster without scanning it first, a barrage of fire came unexpectedly from an unknown location and the crew was stunned. Watch out for that Commander.

We have the beginnings of the objective system happening in map one and that’s actually the prerequisite to a whole host of cool stuff like statistics collecting, incidental mission objectives which will jolt the player into action and the inevitable win/lose mechanism. We look forward to maturing that a little more in UPDATE 5.

In addition we have all the stuff that was resolved thanks to community feedback! Actually we had a huddle round to discuss our opening week and we are so flattered by the reception we’ve received. Many of you warmed to the empty shell of Shallow Space and are happily bouncing around the forums and it is just so great to see thanks! Of particular note are the subtle fixes to the Ship Config screen that you guys suggested helping you to better plan your configurations and there are more of those to come.

UPDATE 5 will feature more ships, more abilities, more modules, more maps and the win/lose conditions that will bring the instances gracefully to a close. With that we’ll round the edges off the tactical sandbox making it water tight and then we’ll gently but generously pour in the proverbial goodness.

Thanks again from the team and me for a great opening week, we’re all really humbled! For the full patch notes, follow this link. Please report and bugs and issues you encounter here.

Over at explorminate, Kearon has done a second skirmish video, check it out:

Also, enjoy the first 3 parts of the INC Armstrong cruiser. There's 2 more images in our image gallery here on IndieDB!

How long will the game stay in EA?

I vote for a long period, like Grim Dawn has been doing for the past two years.

The thought had crossed our mind too. We're happy to continue working on it as long as it remains financially viable to do so which is why the delivery plan is modular. At the very least we'll get a great game but if the public get behind us we'll really stretch the boundaries of what can be expected from an RTS.

The trouble is, does the market want the game we're making? and can we achieve and maintain enough of a presence to make it a long term crusade? Anyones guess really.

All I know is compare this title to many of our peers and it's easy to see that we're shooting a little higher than the average offering. But the media remain solely concerned with writing about titles from bigger studios and we are still largely unheard off.

Still on the flip side it means that things are manageable, right now the path is clear: Fix bugs, add features and we're pretty thankful that things are still that simple!

I've been part of the development team of two games, I definitely know how it feels. BUT, but, a slightly longer EA is balanced by a better product, if done properly.

No disagreements there and we do want a good product, but ultimately it's in the hands of the player. It makes no sense to forcefully protract development of a title that isn't selling but if it is selling, sure we'll keep adding to it.

Early indications are pretty good and we're optimistic, but as you probably know the PC gaming market is savage and spins on a dime. If I tell people it's going to be a long EA, they'll accuse us of being a scam (it's already happened in fact.)

that happens all the time. Just get a good PR.
EA IS game, one has to understand. It's not like they have nothing to feast upon.