We just received the figure poses for the next character.

Progress for Child Arms is going great. I have just received the figure poses from my artist for the second character, a female with a rapier and buckler. While the first character is the all-around balanced character, this second character is all about speed with her weapon suited for fast strikes. So fast, in fact, she may be the only character that can combo. However, that is a recipe for a game-breaking character.

Before I continue explaining her mechanics, I must explain about stamina. Looking at the gameplay video, you'll notice a white bar beneath the health bar. This is the stamina bar and it was implemented early on when I realized that an opponent can constantly side-step out of the way without any penalty, making it a very effective defensive mechanism that can be overused. To combat this, the stamina system was made. Taking a step to the left or right drains stamina and if you keep moving in and out of the fight, you will eventually get tired and not be able to move or attack until your stamina refills. 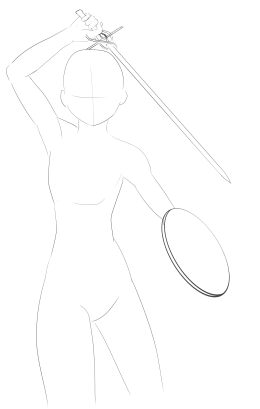 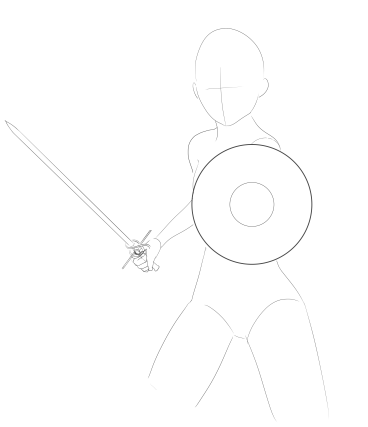 Sample of the figure poses

In the case of our second character, because she is the fastest character in the game, she can throw attacks one after another before the player can react to it, making her very OP. The stamina system helps to balance out the gameplay. The more attacks she accumulates in a row, the more stamina it requires. That way, the player can go for a combo but eventually the stamina will catch up to them and they will either have risk getting tired and continue or limit the combo and save their stamina for other actions.

Another measure to keep her from being too powerful is to lower her attack strength. In a way, she might be the weakest character due to her weapon dealing the least amount of damage, but this should encourage players to combo a lot more to get more use out of her. There is also the amount of hit stun the opponent will deal with every strike. In comparison to the first character, due to doing much more damage and having much more recovery time, the hit stun for the opponent is around equal to the player's recovery so that neither has the advantage. With our newest character, due to her having even less recovery time, the hit stun of the opponent had to be lowered to a fraction of a second so that the opponent will recover much quickly. This way the opponent doesn't get button mashed to death and will have a small opportunity to guard the next attack if they are quick enough.

Those are currently my plans for her. I will update more information later on when I implement her special moves.

If this game intrigues you, then please check out our social sites at Facebook and Twitter to be up to date on the progress of this game.

This project also needs your help. We are currently working on a demo to show off at events. If you are interested in helping out this project, please check out our latest mobile game, The Great Ladder to the Moon. The proceeds of that game will help us greatly in the development of Child Arms.