In today’s update, though, we’re covering a number of topics revolving around our plans for the big V 0.1.0 (Alpha) launch. Firstly, we want to let all of our Beta Kickstarter Backers know that they will soon be receiving an instructional email that explains how to obtain your Steam version of the game.

Welcome to our second (and far more official) April update!

We had a bit of fun on April 1st, as most of you know, but if you any of you missed out on it, you can head on over here for some tongue-in-cheek giggles.

In today’s update, though, we’re covering a number of topics revolving around our plans for the big V 0.1.0 (Alpha) launch. Firstly, we want to let all of our Beta Kickstarter Backers know that they will soon be receiving an instructional email that explains how to obtain your Steam version of the game.

Previously, we stated that we want to begin moving into the Alpha Stage and send the Pre-Alpha off to greener pastures in the near future. We have decided that the game will officially transition over to Alpha when the V 0.1.0 patch hits (which will be implemented over the next few months). We’re aiming to have core systems, such as Nugget AI and Planet Generation, polished and optimized. As you know, we have been spending a lot of time lately working on performance optimizations and building the most stable platform for future eras and features. We’re always experimenting with and developing more solutions as the game progresses.

Based on the feedback we’ve collected and the feedback you have submitted to our forums, we have decided to make Nuggets more autonomous. We want them to be more independent, more self-sufficient, and more alive. Don’t worry, they’re still slaves to your desires, but now you don’t have to spend so much time with them. It’s a very unhealthy and one-sided relationship, but they’ll probably never notice. Mortals are so ignorant and easily manipulated, aren’t they? That’s why we love them.

Well, the switch to a more autonomous system means that you’ll be spending far less time controlling them via sliders and managing their jobs. They’ll also be more intelligent with how they select and prioritize actions. We’ll be talking a lot more about it in our next update.

For V 0.1.0, we’re planning to have multiple systems polished down to a (mostly) finished product. Although, we always maintain that things will keep changing until we cover our eyes and release the gold product into the world. And then, um, change things again in post-launch updates.

Right now, we’re still stuck in the Stone Age. That statement’s got a number of meanings. Basically, it’s taking us longer to build this first era mainly because we’re implementing most of the systems you’ll see throughout the game.

With the Stone Age, we pretty much introduce core gameplay mechanics, which, after mastering, will cause progress to move much faster and allow for additional areas to be added reasonably quickly. It’s better for us to get the design and implementation nailed down before adding too much. It’s a lot easier to rework a system that hasn’t been completely implemented throughout every era. For example, rewriting and reworking the research system after the assets for every era were added would have been absolutely soul-destroying.

Here is the full list of things we plan to implement before V 0.1.0: 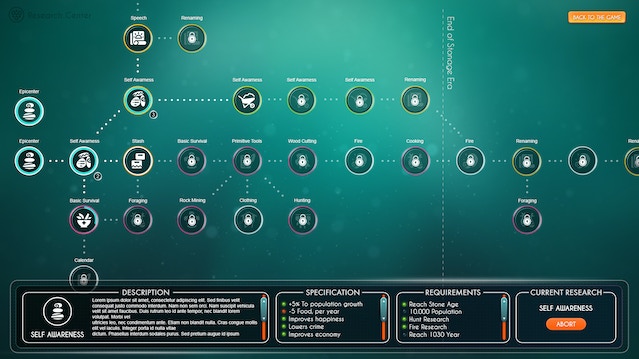 This is a pretty ambitious list, and we’re going to do our best to deliver everything mentioned here. However, sometimes unexpected bugs or other factors can eat away at our development time, but it’s all for the greater good. We chose a slow and strong development process over a fast and broken one.

Since the last update, we’ve been dealing with a number of bugs and even had to partially rewrite our AI system. The hot fix threw us off track somewhat, which is why the upcoming update will not be as substantial as always, but we’ll be introducing some important foundations for future updates in the package.

Here is the list of things that we’re planning to work on after we move into Alpha. Remember, the list is subject to change based on feedback and the current state of the game.

As usual, thank you for your awesomeness!
All the best, The Crytivo Crew