In this update we introduce the colorful autumn season optically, in addition there is a new steering aid system (FGS), extended machine functions and bug fixes.

In this update we introduce the colorful autumn season optically, in addition there is a new steering aid system (FGS), extended machine functions and bug fixes. 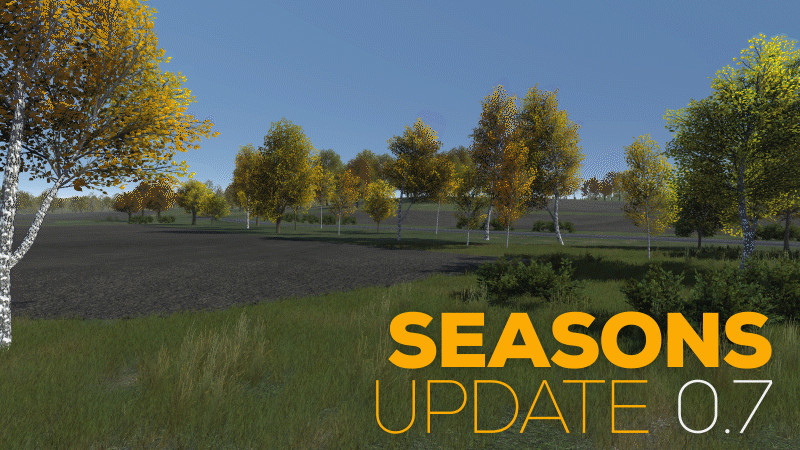 Seasons: With the update v0.7 we added the seasons optically. The vegetation and all tree species have been reworked so that the leaves can change color and the trees can lose their color in autumn. We also connected the wind to the weather data. In the long run, the different cycles will influence the growth of the vegetation through temperature and frost, for example.

Driving assistance steering system: The new Field Guidance System will please all those who like to control their machines themselves. We have heard from many of you how difficult it is to find the right track on the field. The new FGS with its Parallel Track System not only shows you the correct lanes - configurable in width, position and angle - but also optionally lets you steer the vehicle independently to stay in the lane. You only have to accelerate or use the cruise control and turn around yourself. In short, you can now fade in changeable auxiliary lines on the ground and anchor the automatic steering to the center line. With the standard keys "P" and "O" you can call and activate the FGS. You can also change the keys in the options menu under Control. In the speedo display there are status icons in the blue area.

Engine: We were able to successfully update large parts of the basic framework of the engine. However, CNC is still based on a mixture of the C4 Engine and the Tombstone Engine 2.9.1. Unfortunately, we could not yet take over the improvement of the Tomstone Engine regarding the editor and are still working on it.

Field Sprayer: Another area where we got a lot of feedback from you was the slope compensation of the Dammann Land-Cruiser, presented at the end of August. We took your comments and ... "suggestions" ... to the chest and rebuilt the inclination adjustment from scratch. It now really adapts the alignment of the boom to the terrain. Together with the manual height adjustment and the new adjustment of the spread rate, you now have full control over the Land Cruisers. And there's also a smaller 3000L version that's easy on your virtual purse. In addition, a new hose channel system has been built, you can watch the Dammann at the rear if you change the height.

Another wish in your feedback was that you can connect and disconnect the machines via the radial menu. Every single attacher on a vehicle can now be controlled directly, and thus vehicles can be addressed directly. And in addition: every attachment can now even be connected and disconnected via CabControl. Just drive close enough, go to the attacher and click on the corresponding icon.

The Strautmann Verti-Mix and Hawe SLW 50T both received completely new morph fillmeshes, like the Joskin Delta-Cap and Strautmann Vitesse before. In addition there is a set of brand-new unloading particle systems.