Experiments on a style and a new video showing the player character.

The previous month was quite experimental. Most of the time went into thinking/experimenting what kind of modeling style I want to do. Now the experiments have started to show some results. Things should progress faster now that I've decided the style.

The new style is simple and a bit abstract. The characters have their different body parts floating separate from each other. Textures are just color, simple shading and some shine effect. Any detail they have will be modelled, the abstract style allows it to stay quite low poly. Currently the level textures are a bit different style, but they will be changed to fit the model textures/style sometime later.

The new video shows the player character running around and using some weapons against some player dummies. The weapons are the starting weapons: Swords and Gun, and the ultimate weapon: Plasma Storm Cannon. It will still need some actual attack animations.

It also shows some jumping. There could be a small and big jump. The gravity could also be lowered, so player could float around for a while. Player will have lots of air control, the big jump would be sort of half flying then. 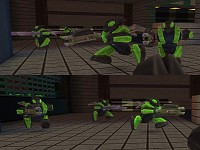 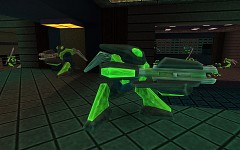 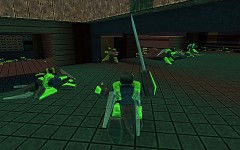 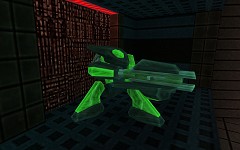 The name of the game is still undecided. I was thinking, maybe next month I change it. The name could be some reference to the player character. But what exactly is this character? Self-Transforming Machine Elf? Dragon?

Anyway, the character has also given me some more ideas to the story of the game, so the story would be a bit more than just a one-liner. It could possibly include some humor to lighten up the mood, maybe some clichés completely overdone.

Looks like Quake 2. I was very surprised to see it's the Doom engine.

Yea, Doomsday Engine got some Quake2ish stuff in it :)