Over the past month, a lot has surprisingly happened, the game is progressing faster than I could've imagined!

I've started development of the game in late December, and less than a month later, I already have the core game made! Development has been progressing at an alarming rate! I never thought it'd go this fast.

I've almost got a full level made (tutorial level), I've added the weapon, giving it the ability to switch weapons (as many as I want), reload whenever it suits the player, and, this is the unique thing, all the gun will shoot out darts, and what you can do, is if you go over then, you pick them up and it goes back into your ammo, it's more of a novelty than anything, as being the type of game it will be, it isn't needed, but it's cool anyway!

I've also have basic A.I., so basic, the only things they can do are move towards you if they can see you, and don't if they don't, considering what you'll be fighting against, this is all they need! The boss battles are another story, but I shall worry about that another time!

I've also added a Mini-Map, which won't be entirely useful, except that they will guide you through the level, where to go, etc. The levels will be big, and maybe confusing, so this will be useful.

I've almost finished making one of the game's classes, the "Alpha" Class, who will be the commander of the Rossies, they will be 5 classes and all, I will reveal all the other classes as I make them, ooh! Exiting(!)

I expected the model to be a disaster, but surprisingly, it turned out awesome, at least in my opinion, What's that? You want a look? Well... Okay! Here!: 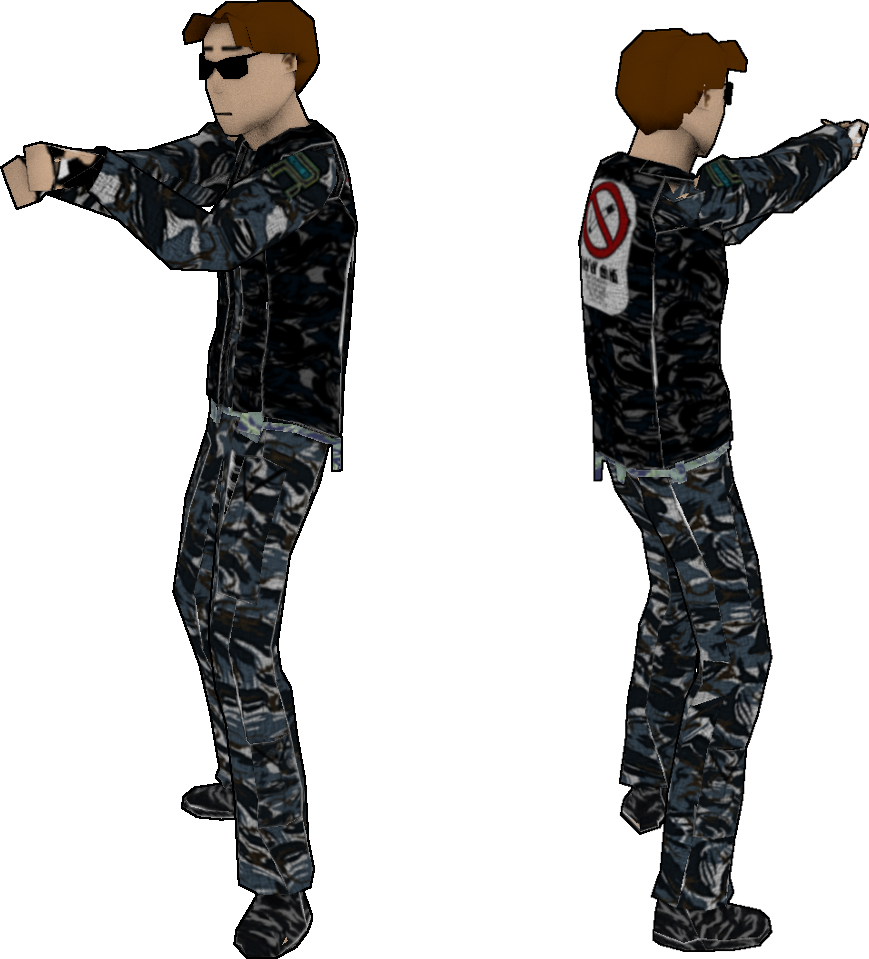 Trust me, the textures look MUCH better then they look here, I can see why no one uses Blender's default renderer any more...

I put him in a pose he would be if he was holding a handgun, the problem is, I haven't given him a gun to hole yet, I just wanted to see what he would like in the pose he'd be in for most of the game, it turned out good, although they are a few incidents of the clothes going through the skin, I hope to fix that soon...

What's that on the back of him? Why that's a No Smoking sign!
Why is that there!? Not telling, I don't want to spoil anything...

Want to see the enemy as well? Sure:

Without spoiling much, what you're looking at here is an alien, taking for form of a human, your stereotypical Glasgow ned, to be exact, only much dafter! I'll leave it at that.

Also, speaking of story, I'm working with an old friend of mine to help shape the story, and the game up, we both had whacky ideas about the Rossies way back in the day, and dare I say, this guy is a nutter! In a good way, though! He's come up with some awesome ideas so far, if things go well, we might have one heck of a game in our hands here...

One last thing, I have DSL (Damn Small Linux) installed on this machine via VMWare, but I can't transfer files from my desktop to the virtual PC, so I can't text the Linux version of the game, if anyone knows how to transfer files from a Windows Desktop to a Linux emulator, can you tell me what do I do? Anyone know a tutorial of sorts?

That is all! This is Cobra! signing out!