It's been a while since I've done a development blog, I know I said I wouldn't be doing more, but I had to make an exception here.

It's been a while since I've done a development blog, I know I said I wouldn't be doing more, but I had to make an exception here.

A lot has happened in the past month, some things important, some, not to much.

Sometime at the end of February, my game got corrupt! Lucky, I had a back-up, but it was a month old, so I lost a months worth of work, as you can probably imagine, I was really p*ssed off! Luckily, since I still had the resource, I was able to get back to where I was in about a couple of days.

Most important thing, the core gameplay for the game, most of the game's overall code, is done, dusted, finished! All I would need to do now is to model all the levels, maybe write a wee bit of boss-specific code, and menus, that's about it, maybe create low-poly models of the classes (as AI) for the gameplay.

I've started on the latter of the 3, because I realised as good as the models I've made are, they are about 3000 Polygons! Which is still low by todays standards, but not small enough, I wanted an early Dreamcast/PS2 look, similar to the original Hitman, or maybe Shenmue or Fahrenheit/Indigo Prophecy.

So I went out to try and create a low-poly model from scratch, and I achieved a base human model that is as many polygons as you're average PS1 model!

Once I added the clothes and hair for Alpha, though, it, of course, added up, but it totalled to roughly what I was aiming for, so I got there in the end. 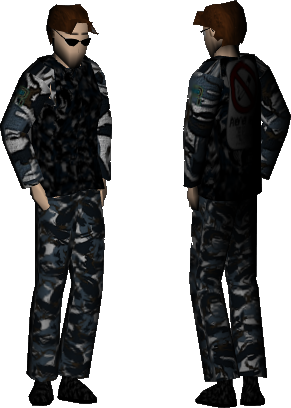 They're like the original models, minus the moving eyes, and the mouth, and with a nose so flat it can only be seen from the side, and simple, "triangle" hands.

I'll make all the other classes and the Kruncanite enemies, and then it's on to completing the game itself!

That's all I have right now, see yous next blog! That is if I make another...