Things are still progressing nicely, the game even now has things your average AAA game doesn't have! ...Alright, they're little details, but still!

Alright, we're back with another development blog, and things are still going as smooth and fast as before, well, there was a speed bump, or two, but that's for the most part smoothed out.

I've done 2 more classes for the game... However, I discovered a flaw with all of the classes I've done, they have no eyes, and only part of a mouth, and doing them all individually would be a nightmare, so I'm starting from scratch, which would save me in the long run.

I've almost done Alpha again, and I have to say, the revision's looking great, the heads look a little more realistic, and I loves the eyes. I've done Anime eyes, they are animatable, but only through moving the UV around, these a plug-in on Blender that lets you make keyframes of the UV, but I'm not sure if it will work with Unity, we'll have to wait and see, don't we? I'm about to do the mouth, but I'm not sure if I should bother with the mouth.

What do you guys think, should I move the mouths, making it look like Tony Hawk's Underground, or should I leave them shut, similar to 007 The World Is Not Enough on the N64?

Anyway, while you decide, I'll let you have a peak at the new Alpha model, close-up, glasses up, showing the eyes! 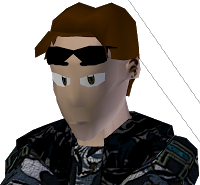 As for the gameplay itself, I've now made little details that aren't usually seen in your average AAA FPS, If you look down, you can now see yourself!
Name the last FPS you've played that! Okay, I can name a few, but generally, you never get that, why? It's not like they're complicated to do either, it was easy with Unity, a free engine, I can only imagine it'd be easier with, say, Source or Unreal, which costs hundreds of thousands!

I've also added life/armour bars to the game, I only managed to get them working today, actually! Just need to make some tweaks here and there, and they're complete!

I've also made the character crouch, "What's so exiting about that?", not much, I was going to make crouch-moving animations, however, the way he was crouch was JUST like goldeneye, I thought it looked so awesome, I had to make the player slide just like Goldeneye, and upon asking on the Rossies 3D Facebook page, it was unanimous, all my fans (All 3 of them!) wanted the Goldeneye sliding!

I've also been playing around with the enemy A.I., I have now made stationary, wandering, and patrol A.I.

Stationary is self explanatory, the enemy just stand until they see you.
Wandering is where the enemy literally wanders around aimlessly until they see you, I have a certain type of A.I. who are supposed to do that.
Patrol is there the A.I. cycles through waypoints (Not literally, though! Well, I imagine it's possible...), once they reach the last point, they go back to the start, this is only interrupted if they spot you, they then go after you.
The enemies can also lose sight of you by either something being in the way, or if you're too far, then they go back to doing their respective jobs.

That's really it for today, I hope to catch youse next time!