Hey everybody! This is the first time I'll be posting a development log in a little over 2 days. But we're still on track and moving forward, not to worry!

This is the first time I'll be posting a development log in a little over 2 days.
But we're still on track and moving forward, not to worry!


Good news for all our female followers (which I doubt exist) or guys who'd like to play as a Kunoichi (more likely).
I've been working on something important for the game - the female sprite base. With 88 animation frames, it's was definitely not an easy task for me, but it was important as hell to finish before moving on to other paperdoll items, or anything else at all. After this, I'll need to make the paperdolls for the items done for the male, work for the female base as well.

These are the walking animation frames. 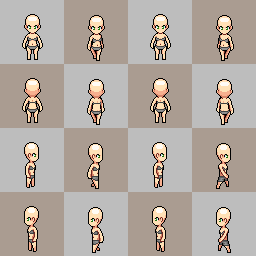 These are some of the attacking animation frames. 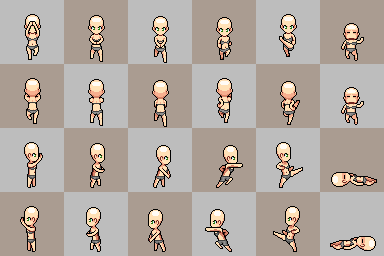 I know being bald doesn't exactly make her seem very feminine.
So here is a demo of her with a test hairstyle.

It really brings out her eyes


I've also managed to get another paperdoll done for the male base.
Something I'm sure a lot of people will like.

ANBU Vest!
NOTE: The clothes underneath aren't "Anbu Standard Uniform", but I haven't got short sleeved shirts done or tighter pants. So bear with it for the moment! 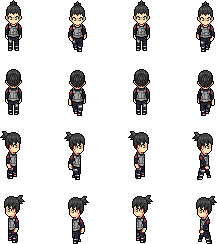 About releasing my spritesheet and other stuff

There's a good reason why I don't mind posting up my work in this form, ready for people to take and use. It's not because I encourage that they do. But as much as I want to create the game, I hope that in future these development logs will show a process or example of what is needed for others to create a game like Nin Online.

This said, nobody is to use the sprite base, or any other of Nin Online's artwork for any other game. It's been done so many times in the history of Nin Online, that I'm almost certain some noobs will come around and try to edit the base slightly, make a shitty game and try to gain attention from that.

I wouldn't bother taking any action early on.
Seeing as how if you can't create your own sprite base or art, you aren't competent enough to make a game anyway. If on the off chance that you do release it, I'll consider taking legal action.