Not only do we have updates for 2 Primary Weapons and a Secondary Weapon, but we've fixed a major bug for the Jetpack and we're subscribing to Unity Pro next week. Droid release and single-player zombies release will be soon to follow!

A few things have been added and they are showcased in the video below. First and foremost, the bug/ability to fly through the fence and walls was really irritating me, so I've taken care of that with some simple box colliders. When players try to fly outside the bounds of the current arena they are promptly stopped. I needed to get this done before releasing the zombies level since flying outside the designated play area and away from the zombies was providing a steep advantage in the level.

Next, I was having fun with creating projectiles for the various weapons (the Laser Canon and Sniper Rifle were featured in the last post). My plan with the zombies game type is to start all players off with the Assault Rifle [primary] and Pistol [secondary] weapons. As the player progresses they will earn ordanaces that will offer them more powerful weapons. So, the next logical step was to create the projectiles for these two weapons, which are also showcased in the video below. I then finished up this weeks projectile work with additions to the rocket launcher.

But what I am most excited about is that I will be subscribing to Unity3D's Pro Subscription system next week. This will allow me to use all the benefits that Unity3D Pro offers, which is a long list of features. Since BlitzBotz uses an authoritative server and socket connections, Unity Android Pro is also required to produce Droid versions of the game. Also, the Pro has some very eye-appealing visual effects that will be added to the game in the coming weeks. My plan is to finish up work on the single-player zombies, get the rest of the attack buttons working as expected, and if time allows, also put the finishing touches on some multi-player BlitzBot vs. BlitzBot elements so that we can start some 1v1 competitions.

As far as the changes in gameplay elements I mentioned earlier, these will covered in a future news post, but for now all you need to know is that they are going to make the game more fast-paced, and although they will make the learning curve for the game a bit steeper than the present setup, the new attack controls will give the player much more control over shooting their opponents. On top of that, the attack-arcs and min/max damage settings of weapons is being scrapped for a more realistic, ray-trace based hit detection system, which will give the game more of a FPS feel, even though it will remain a top-down shooter. Suffice it to say that you will need to be more accurate, more familiar with your current loadout, and time not only your button presses, but button releases as well, if you hope to be in the top of the BlitzBotz leaderboard. 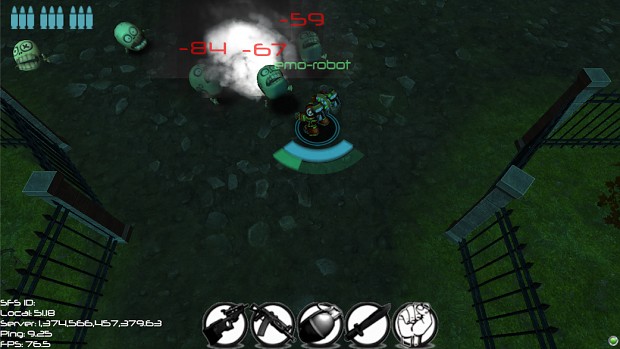 So although the release of certain features is going to be pushed back a bit, the game will be better than originally planned. Using the sniper rifle will feel more like using a sniper rifle: meaning patience and a little bit of enemy prediction will be required to land that perfect headshot. The contrast to this is that while you line up your perfect shot, you will need to be standing still, leaving your BlitzBot completely vulnerable to attack. As someone who grabs sniper rifles any chance I can get in FPS console games, I am looking forward to these new features for BlitzBotz, and the fact that these changes will make BlitzBotz Snipers-only Arena's a reality.