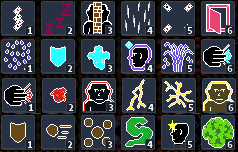 I really like how air feels, i dont want to mess it up. I do want to clean up its daydreaming icon to keep with theme rules.

Water is bonkers and I love it. Need to find a way to keep its flavor without nerfing it into the ground, so fun to play as.

Fire feels a bit too clunky. The class hinges on a stealth mechanic, i may need to buff how often it can be recasted and nerf how much regen is gained during stealth. I may also add the 7th spell to water, Revealing mist. Because without that, other players have no counters to stealth--and without stealth fire path is just a slow nuker.

Earth is weird. I really wanted it to hinge on a shielding mechanic...but it just doesnt function how I thought it would. So its official role atm is lurer. Its gonna need a self heal instead of a shield.

The video below is an excellent demo of the current gameplay:

So far ive been designing the game with only spells in mind really. I kinda like that. Equipment is a way to channel magic, it has no direct use in combat, it simply enables or buffs spells.

Cluckens are a level 1 enemy. The acolyte caves current has 2 quests. Both of them are auto complete and auto renew. So once you get the quest, you can keep getting the rewards for it. The way crafting is setup, you will want to excessively farm Cluckens to get your first set of gear, it gives some great bonuses to your statistics.

The acolytes cave is basically your tutorial, you get to know how the game works, learn your first few spells, then you can either stay and farm for gear, or team up with another player and dive into a different dungeon. I need to populate it with some near-impossible to defeat enemies. This will help teach players that they arent all powerful, and in some cases they will need to use a strategy other than watching their hp bar and spamming SLAP.

I need to set some firm rules on how dark or light I want areas to be and why. Its kind of all over the place and I need to get this rule established before the maps enter triple digits.

I'll be playing around with damage and defense formulas next week to help make defensive builds seem more relevant. ((right now they are low key trash))

As far as look customization, that is what gear is for. I do plan on adding a SKIN equipment slot eventually, to help players make the perfect look for their character.

None of the story has been implemented. The basic outline is--you were a homunculus designed by the gods to seek out magic in the world. These same gods have been trying for thousands of years to rid the world of magic.

So why would they create a being with free thought and knowledge of magic?

-You need magic to defeat magic, and without the creatively born of free thought...magic is worthless.

How do residents of the world react to players?:

-Most of them think you are just another resident of the world. Some will recognize you carry magic and either attempt to work with or against you.

Why is it so dark everywhere?:

-The sun was CLEARLY magic and needed to be blocked.