RimWorld has been greenlit! It took two weeks. Thanks to all 21,240 people who voted. We finished at #7.

RimWorld has been Greenlit! Thank you to all 21,240 people who voted Yes. Here's the main RimWorld page on IndieDB.

In other news, the RimWorld community continues to mature.

The game itself is also making good progress.

The latest build has been given to a number of YouTubers and journalists, so you should start seeing videos of it in the next few days. I'm working closely with an artist to develop a new character look. It's coming along really well, but there's nothing to show publicly so far.Testers and YouTubers are really starting to push the game. This is great - with all this feedback, we'll be able to make really good design decisions. Here's a base from miah, who managed to get his colony up to 22 people. 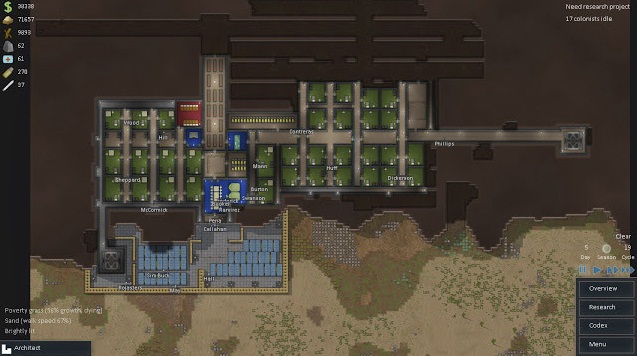 But it's not all happy times on the rimworlds. Here's the final end to a challenging colony that weathered massive pirate raids only to be overwhelmed by a herd explosive, crazed animals called boomrats. When it all ended, there was one colonist standing. But poor Santana had no food source without a nutrient dispenser, and starved to the point of incapacitation before he could build one. Here he is gasping his dying breaths in the shattered, lightless base as rain pounds outside. If another colonist were there, they could rescue him. But they aren't. (In future versions, the AI Storyteller may be able to detect this kind of situation and do something about it.) 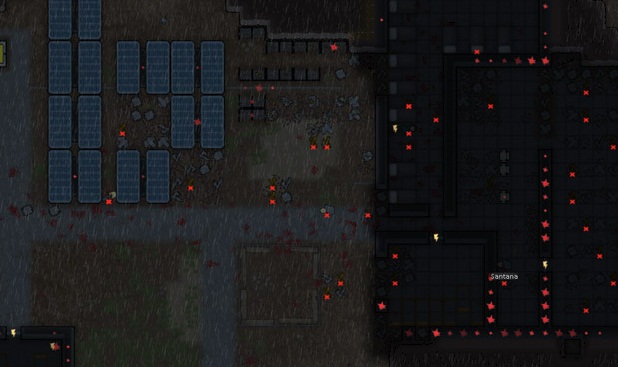 so if i have backed you so its possible to get youtube version? - i am good at making videos for it

It is mentioned that the people who backed the game (in my case, influencer tier) get the game once the kickstarter ends. Would that be in about 10 days, or would it be in the few days after the kickstarter?

I am just wondering since I am eager to play it and I want to avoid having to decide between X Rebirth, Pandora First Contact and Rimworld as the new game I'm gonna play first.

i assume then that what is mentioned in the Q&A and on the pledge page is correct :)

Is there any possibility of the game going multiplayer?