Posted by SilverDollarGames on Jun 29th, 2013

Cinematic kung fu is effing glorious, but capturing the fast-motion and the feeling of being that destructive with your fists and feet in a game has led to half-assed, malformed attempts over the years. And then One Finger Death Punch strips away all the pectoral muscles and loosely-hanging cloths and manages to whack the nail on the head with a masterful palm-fist. With stickmen, of all things!Cory chortled when I showed him One Finger Death Punch for the first time, just because the game’s graphics consist, at least in the foreground, of boldly colored stickmen. But focusing on that is really not the right thing to do. Look at the motion and the screen effects. Most importantly, perhaps, gaze at the 1:1 response system that enables some really intense fight sequences that looks like a gory firework display, bodies popping and bursting as part of the presentation. There’s a reason why One Finger Death Punch won the Dream.Build.Play competition last year. I’m tempted to say that the sound design may be the strongest part of it overall, though. Crunches, crashes and exaggerated swiping sounds – just like a kung fu movie, but somehow, much better. 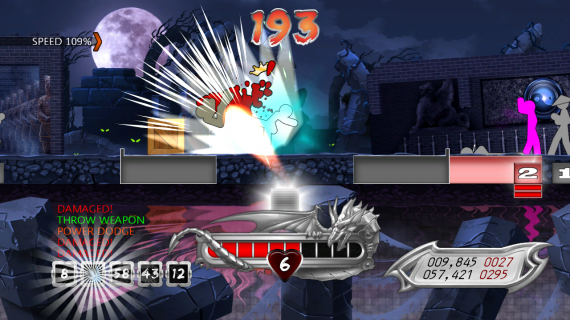 Positioned center of the screen, you play a kung fu master that becomes the heart of chaos as soon as some enemies are introduced to the equation. They will arrive quite frequently from the left and right side of the screen and will run towards you, sometimes with a weapon. The grey enemies that you’ll start off fighting and take only a single hit to be downed, so it’s just a matter of whacking the X or B button once they enter the vicinity of your attack range, as clearly indicated underneath your feet. Due to the enemies having to be within that range before you can make your move ensures that you don’t mash the buttons because that will count as a miss, which not only lowers your final score and what medal you’ll be given, but also leaves you open to attack.Due to being a two-button game, One Finger Death Punch is able to test your reaction speeds more than anything else, which is what allows it to be so fast-paced. You only have to keep the enemies back from reaching you; otherwise, they’ll land a hit on you, and too many of those will lead to you having to redo the level. As you get further into the game, you’re introduced to different colors of stickman. The green guys need two hits to down, and the red ones need three pounds to the face. Purple and yellow are a little different as they will dodge your attacks, and so you need to hit a specific combination of buttons in order to take them down. Those who wear crowns require a longer one-on-one fight, in which you need to perform what is essentially a quick-time event, but it just so happens to blend in with the rest of the game, so it doesn’t feel like one.

“Experience cinema kung-fu in the fastest, most intense brawler the world has ever seen. With its unique 1:1 response system, players will feel the immediate feedback of every bone-crunching hit.”

You really need a crowd for One Finger Death Punch because it’s such an awesome thing to watch, and while playing, you don’t actually get a chance to take it all in, but you can feel it. When you’re sending enemies flying through the destructive backgrounds and splatting on screen, you can see the slow-motion jaw-breaking and face-slicing. I even punched a heart out from someone’s chest a couple of times. Many weapons are brought to the fight as well, and to pick them up, you just need to be near them and press the right button. From there, you’ll start dishing out all sorts of pain. Thrown weapons are probably the best; throwing daggers or shooting arrows at incoming enemies to a gory finish produces a very evil belly laugh. 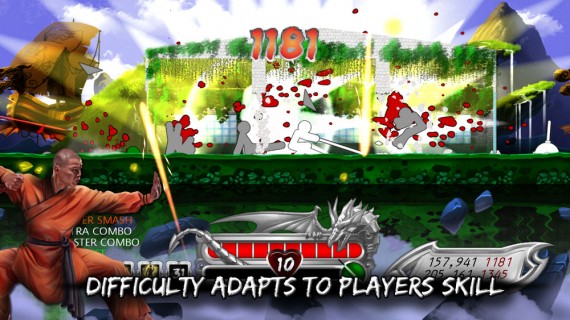 That merely covers one type of stage, though, as there are actually 13 variations altogether, including hitting back deadly projectiles, boss fights, survival, speed rounds, light sword (sabers) fights and many more too, all using the two-button set-up. It’s remarkable just how fast, varied and impressive One Finger Death Punch is. And if it’s not fast enough for you, then the better you fare in each level, the more the consequent levels are sped up in order to match your skill and speed. It’ll adjust to how good you are, not to mention that there are a few difficulty levels to advance through if you think you’re good enough to get through the worst of it without taking many hits.One Finger Death Punch is the kind of game I wouldn’t have thought world work, mainly because it only has two buttons, and before playing, I found myself questioning how hard it could actually get if that’s the case. But I was wrong, thankfully, as it certainly proved when throwing multiple colors of foes at me at a time at incredible speed. It’s such a great feeling when you have conquered all the enemies, and there’s just an absolute mess on the floor, and there you stand, triumphant, in a badass pose, leaning on a katana.Just released on XBLIG for a single dollar, it’s practically impossible to not instruct you to go and snap up One Finger Death Punch as soon as you can.