So, after another successful night of work I can say that the gameplay is getting more and more enjoyable. I have now implemented the first boss and also one new power up.

So, after another successful night of work I can say that the gameplay is getting more and more enjoyable.
I have now implemented the first boss and also one new power up.

While the power up is nothing really special, just a normale HP restorer, the Boss is in fact something new and interesting in the RAA series. Some of you may remember that there was in fact one boss in but it was more or less just a enemyspawner without anything special to itself.
This time there will be a few more bosses and they will have some special abilities. This first one e.g. is able to perform a fireattack that shoots fireprojectiles in all four directions and is really deadly to the player`s hero. Also he is able to teleport himself all around the map to annoy you.
At last he can summon some enemies by himself, just like the final boss in the original version did.
Some of you XBLIG Gamers may remember him: 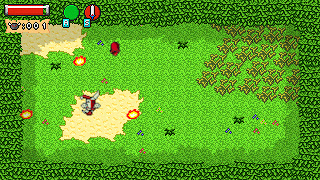 This time, however he has a different role to play. More infos on the plot are coming at a later date.

On another note, I finally decided what name this remake will get. Since it would be really confusing to simply call it Retro Arcade Adventure I decided to add something that shows it`s remake status.
So the finalname for the Remake is:

Yep, Retro Arcade Adventure Remade or simply RAAR. Sounds fancy doesn`t it? As you can see we also got a first(and probably final) logo design.

One last thing to talk about is the fact that I realized how hard it is to show you the new gameplay of RAAR, since gameplay is not really a thing you can transfer to the player by screenshots or footage. I am currently thinking about releasing an Alphademo with the first level and boss just to show you guys how the new version plays and feels. On the other hand, it would be a good way to alphatest and maybe change some things easily since it is all still in the very early alphastate.

This is not yet a final decision but it would help if you let me know if you would be interested in testing the game at this early state?

Well, that`s all for this time, I hope you enjoy this look behind the scenes and will enjoy the final game.

I would love to test this game out! Looks pretty cool.

Thank you. Sounds good, i will look further into the option of an alphademo next week so there may be something to test in the near future.