Gathering and exploiting resources are, as with any management game, fundamental mechanics on which are piled countless other gameplay layers. You will discover in this note the main principles that govern their operation.

Gathering and exploiting resources are, as with any management game, fundamental mechanics on which are piled countless other gameplay layers. You will discover in this note the main principles that govern their operation. 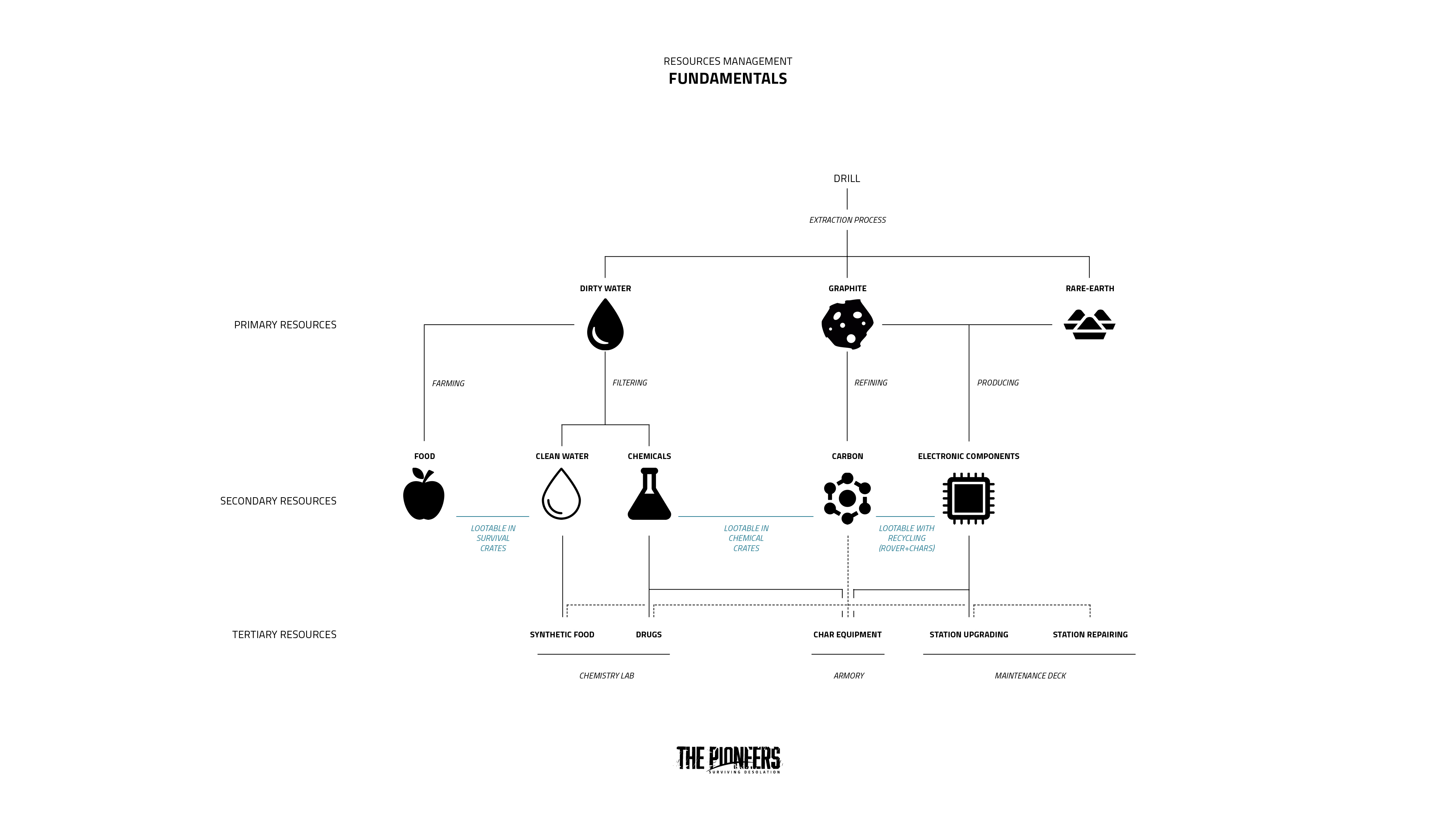 In The Pioneers, the game is played on lo, a particularly hostile environment for human life, set in space. Don’t expect to harvest wood, pick wild berries or trade with friendly neighbours. No, here everything you can and should consume to survive comes from an initial stock available in cases of supplies which are scattered on the surface of lo following the crash of your spaceship, or alternatively produced from basic geological resources that are already available on lo. We have allowed ourselves a certain amount of freedom, in all transparency, on the advances in scientific research on our Jupeterian satellite. Indeed, the first observations of lo indicate that it is most likely deprived of water. Another major doubt is the actual presence of materials or precious minerals. Nevertheless, for the purpose of the game, we speculated on finding a rich mantle, abounding with primary resources and exploitable through the use of a drilling system, available to the player and allowing him to set about planning his survival strategy.

Generally speaking, usable resources in the game can be divided into three main families:

There is another particular category of resources which might be called “immaterial” resources such as energy and time. These are also involved in the transformation process. We will come back to this subject in a different article. 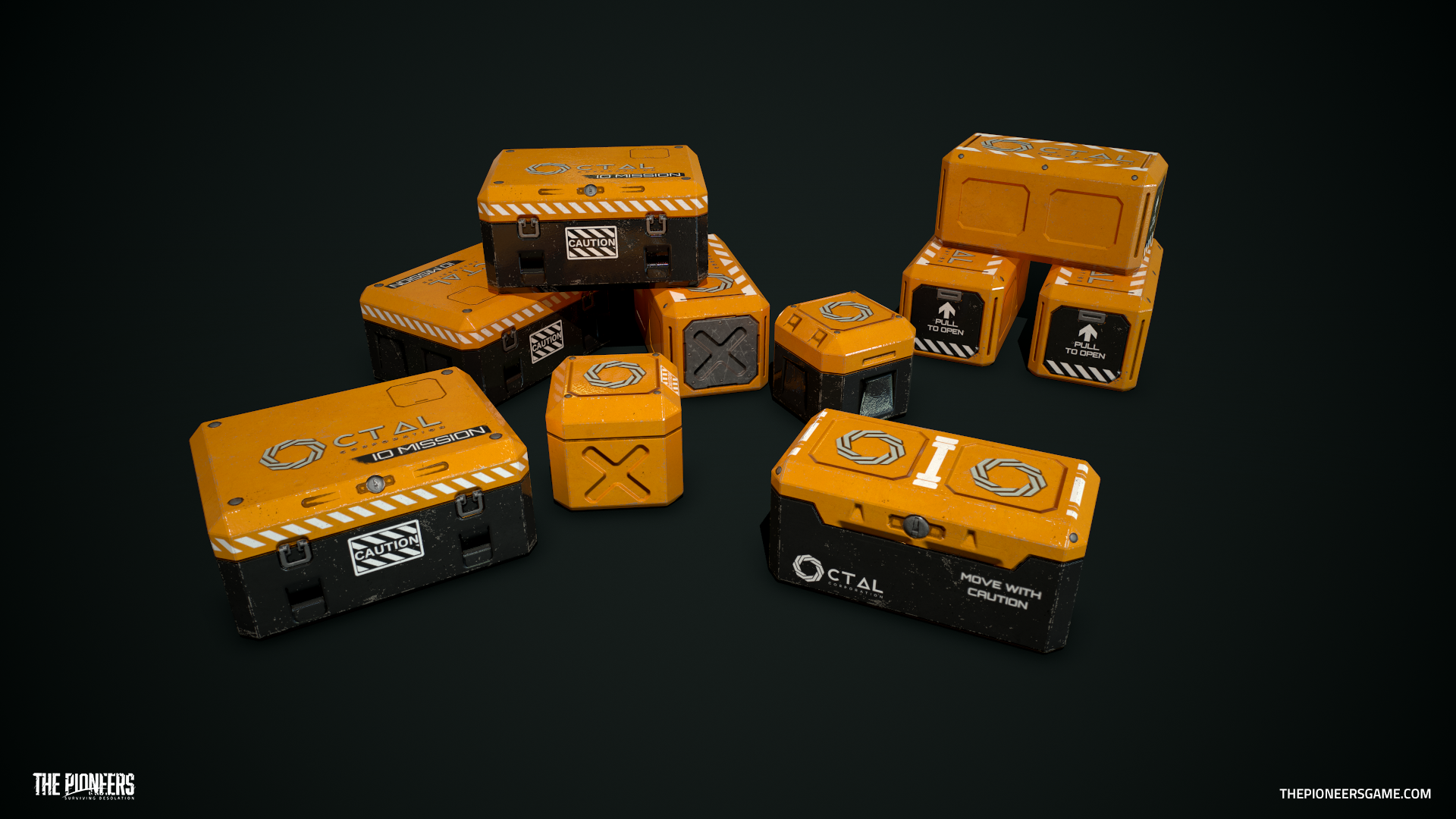 Thanks to the drilling system, the player is able to extract substantial quantities of rocky soils, which he in turn can dry, fragment or separate in order to isolate one or several of the three available primary resources.

Rock is crushed then heated at a very high temperature. Droplets of water imprisoned in its microcavities are subsequently extracted through evaporation, condensed through a vast exchanger system and collected in a storage tank. At this stage, the collected water still contains a number of largely contaminated chemicals. And even though the water can be used as it is for some of the station’s survival equipment, it can on no account be consumed by the crew.

Graphite is abundantly present in lo’s mantle, it can be found in long veinlike cavities that must be fragmented and then recovered through a dedicated column. The column then acts as a rough sieve to separate the mineral. The purity of lo’s graphite is nevertheless not optimal. It is composed mostly of carbon and iron, but some traces of aluminium and silicon can also be found. Several separation operations are necessary in order to obtain pure carbon, a central element which will in turn intervene in the composition of a number of production processes within the station.

One of the objectives of the mission initiated by the Octal Corporation consists in the study of lo’s crust at low-depths, where it is believed the soils are gorged with prodigious richnesses. If it is proven that these precious elements are indeed present, the crew will be able to initiate a first drilling operation and employ them to manufacture their own equipment before considering its eventual future industrial applications. Exploiting rare earths demands a complex fragmentation, detection and separation process – by exchanges of ions on resin – conducted by AI and linked to the electronic components production line. 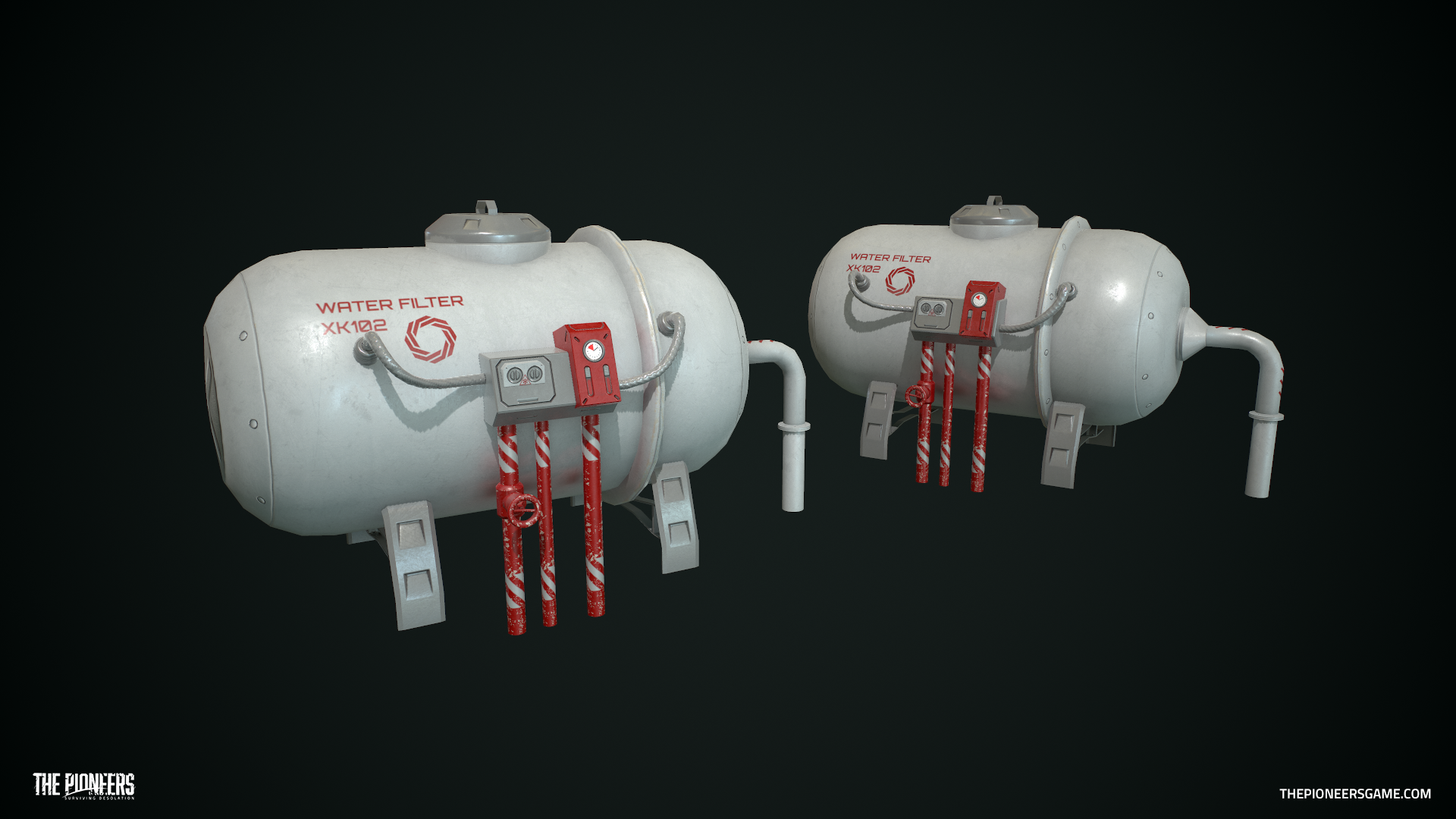 Dirty water, graphite and rare earths are the fundamental stepping stones of the station’s production line. Once extracted, these three primary resources allow the crew to control a transformation line designed to convert them into secondary resources.

Food is of course one of the most precious resources for the crew, which must survive and maintain the highest level of hygiene possible whilst achieving the best productivity levels at work. Food can be obtained in three different ways. Outside the station, it is possible to explore the wreckage in search of cases of supplies which may contain dehydrated foodstuffs. In the laboratory, scientists may be able to synthesize organic substrate like sugar or oil based on a handful of basic chemical compounds. And in the spatio farm, members of the crew can set up the hydroponique cultivation of vegetables, which are critical ingredients for their good health.

Before risking being consumed by members of the crew, the dirty water extracted through drilling and evaporation is directed to a pre-treatment system composed of two decantation tanks and to a high pressure distillation chamber. It is then sent to a second treatment system along with the water captured inside the station (humidity, perspiration, urine before it is recycled). These waters are then filtered and oxidised by the injection of pure oxygen. Finally, the evacuated contaminants are sent to one last treatment system used to isolate pure chemical compounds.

The final water treatment system allows for the recovery of a number of useful compounds, which in turn may be used in the manufacture of equipment, material or medicine. It is formed of a network of separation chambers, which by chromatography, centrifugation, crystallisation and distillation allows for the isolated storage of pure compounds such as hydrogen, helium, calcium or potassium. All these elements are brought together under the “chemical compounds” title, in a gameplay simplification logic, and usable as a single resource by the player.

Pure carbon is obtained after the electromagnetic refining of impure graphite, extracted from the crust of lo. The carbon atoms are then reassembled into different materials thanks to lasers that modify their atomic arrangements. This transformation operation enables for instance to produce small quantities of diamonds, nanotubes or carbon fibres. United under the “carbon” title for the player, these materials are used in the production of almost all the tertiary resources.

The silicon extracted from the graphite and rare earths are sent to a compact autonomous production line where they are transformed into microscopic materials, composites and polymers. This slow and complex process enables the assembling of various electronic components. These are used in the manufacture of high tech materials and in the improvement of the scientific systems of the station. Electronic components may also be recovered by the crew through the recycling of fragments belonging to the crashed spaceship and scattered on the surface of lo. 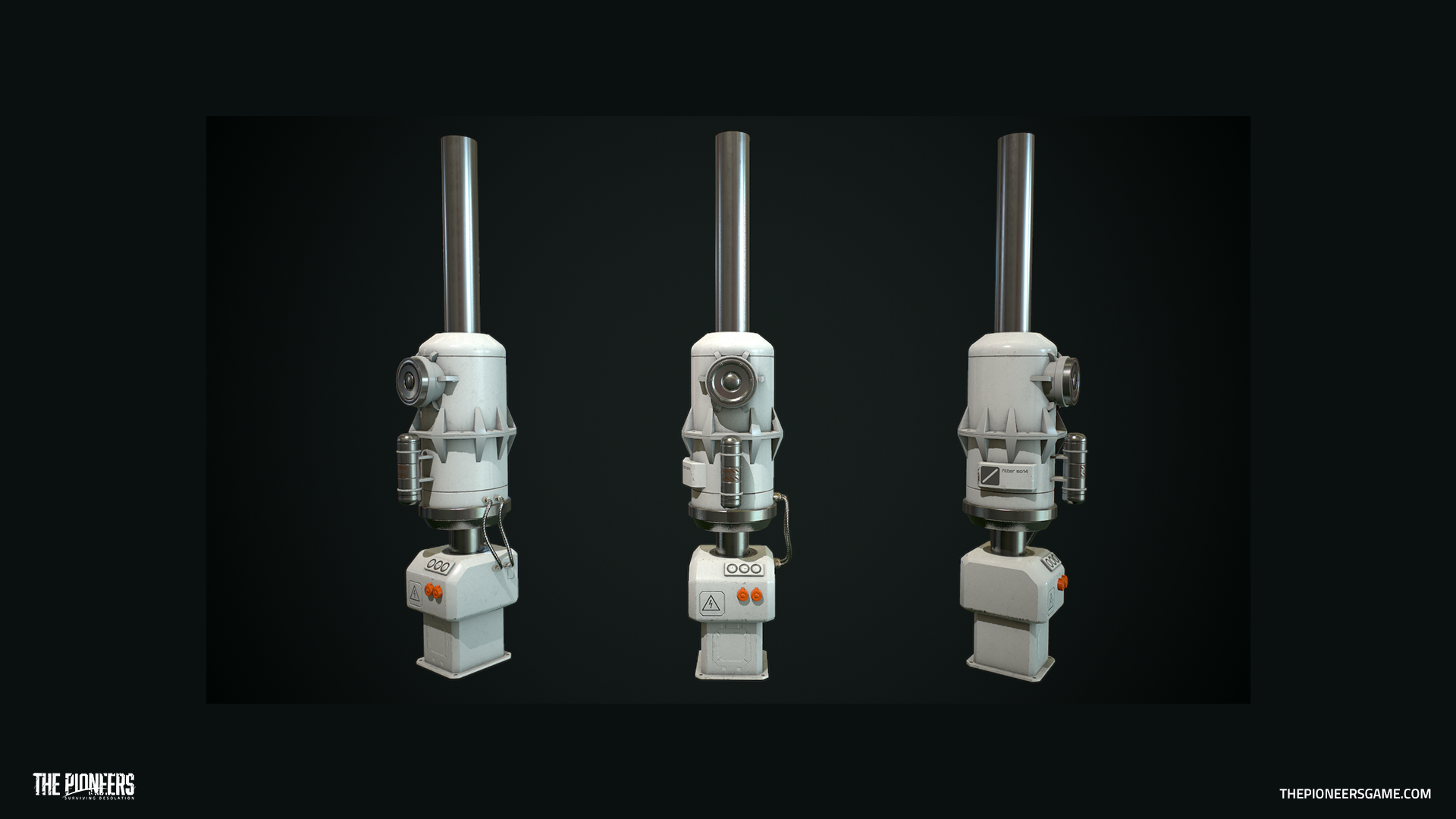 The tertiary resources are the product of the transformation of the secondary resources. They constitute what is commonly called the crafting in video games. This system will allow the player to produce a great number of objects and consumables which will help him in the game. In the station, two rooms are dedicated to putting the crafting system into action.

As mentioned earlier, chemistry enables food to be synthesized. It can thus help to improve the crew’s health by introducing an additional source of calories, and also in diversifying the diet of the residents. But chemistry allows above all the player to produce drugs and medicine, which are very valuable and important gameplay elements in the context of the mission’s location. Exposed to a number of dangers, the characters find themselves often wounded, ill or invalid and without a top-end pharmaceutical assortment their chances of survival are considerably diminished. Several dozens of different molecules can therefore be synthesized in the chemistry laboratory, each one having specific properties, that can only be applied to certain pathologies and in specific contexts.

From carbon, chemical compounds and electronic components, a more or less specialised character in mechanics or electronics can produce armoury equipment. This equipment includes EVA jumpsuits, accessories, tools… needed to improve the attributes of the characters, their productivity levels or even their resistance to the various hazards that threaten them. 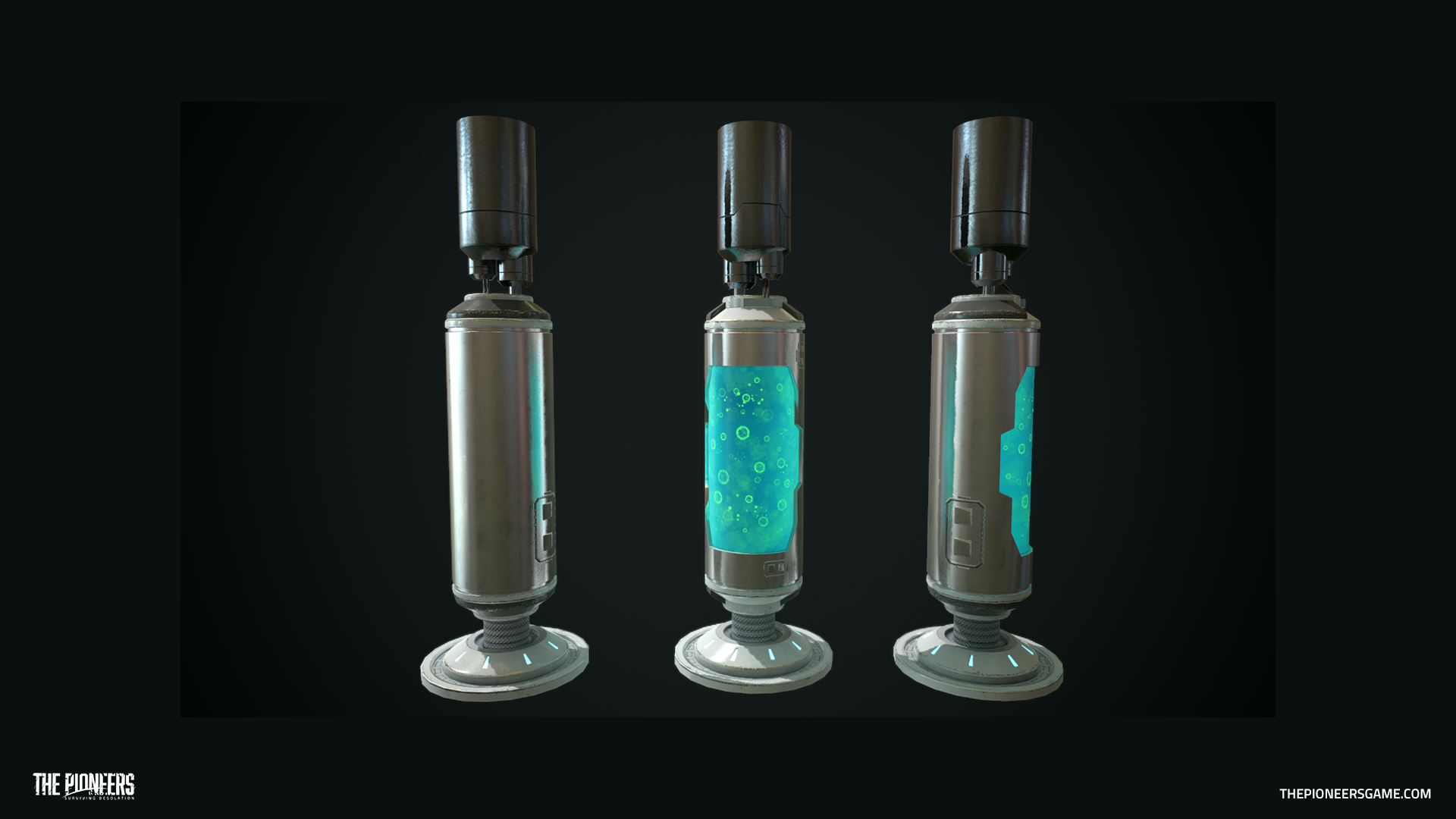