This is not a dev diary, just some thoughts I am having since a long time regarding recource management and its difficulties.

Resources in videogames can be many things. In some RTS's it's crystal, food, stone, wood; in FPS's it's ammo, health etc. you get the point. In Amnesia, the two resources the player can directly manipulate are tinderboxes and oil. They depend on how much the player uses them. If they chose to, they don't even have to use a single tinderbox or activate the lantern once in their playtrough or (the first mistake every player does) use tinderboxes the very moment they pick one up and never turn their lantern off. It's completely up to the player how they use it to their advantage. This freedom makes it very difficult to balance how many of these resources the player gets, because if it's not just right, it can ruin the gameplay. Players don't enjoy wandering aimlessly in the dark for long periods of time but they also usually want some challange and notice it when they can just use the lantern whitout a care and not get punished for it.

I'm in a very lucky spot because I have a wide range of friends, from "pro" gamers who have been playing video games since they could sit straight to ones I had to teach how to move with WASD and look around with the mouse when they were testing the mod. This allows me to watch a wide array of playstyles go trough my mod which is an ENORMOUS privilidge some indie developers can't afford, let alone a lonely modder. As good as this is, I had a lot of trouble balancing how many tinderboxes and oil bottles the player gets. In fact, trought the development of this mod, I have grown to hate oil bottles (or oil potions as they are reffered in the game's files), becuse they are static and the player can just store as many as they like whitout using them.

This leads to me being unable to accurately measure how much oil the player has currently at all times, unless they used up all of their oil bottles. Not long ago I had a very early prototype of a dynamic difficulty system, that would track how many resources the player has as well as how many times they died, and give the player resources based on that and spawn monsters as well. It quickly failed for a few reason. One was that I wanted to use monsters more strategically because in this game they aren't just an enemy you have to kill, they are another tool to scare the player and raise tensions. The more important reason was tough that - as I mentioned before - I can't accurately measure how many oil potions the player has stockpiled. I can count their tinderboxes, their oil level and wether the player has oil in their inventory or not, but I can't count how many exactly.

Did the player forgot about that 1 oil potion in their inventory and now they get less tinderboxes, less oil because of that? Or I pretend that the player has always only 1 oil potion and set their difficulty on that assumption? The problem is that more experienced players usually don't use up all of their oil potions. When they run out of oil, they use one up and keep the rest. Add the large oil potions to the mix and everything's a huge mess. For this reason, you won't be able to find large oil potions in my mod, and most likely it's the same or a similar reason Frictional games cut the large oil potion from the original game.

Another thing I learned from playtesters is that to encourage the exploration of the levels, they need incentives. When they sometimes find tinderboxes or oil potions in some drawer that's hidden from sight unless sought after, they will more likely explore more of the levels, especially out of desperation when they run out of resources. This is another good reason against large oil potions. If I placed one in a level, that would limit me to only very few tinderboxes if any at all on the same level and no oil potions for a few levels, which results in less incentives for the player to explore, which results in less players exploring the levels and on and on. Ultimately this results in the game feeling less engaging.

As much as I have grown to hate oil potions, as much I started to love oil barrels tough.

In case you didn't know, they are these things: 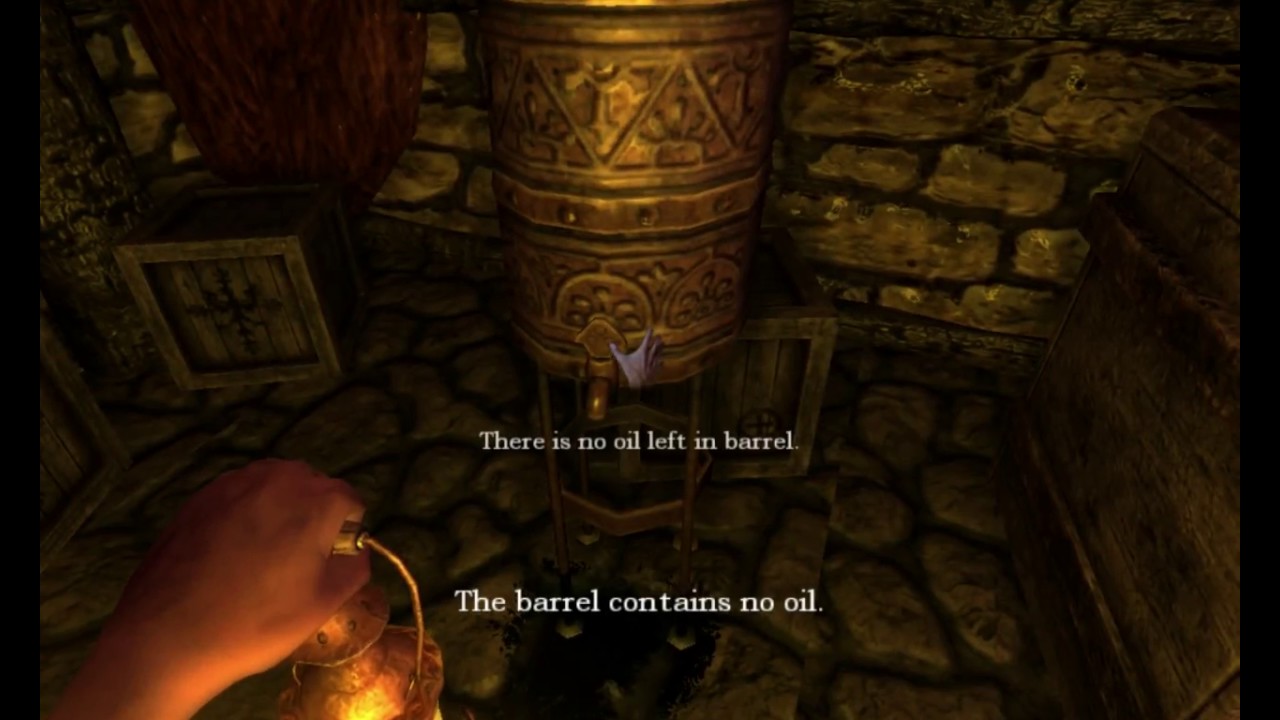 They contain oil based on the player's current oil level, resulting in more dynamic gameplay. The player uses up their oil a lot? No problemo friendo, your lantern is now full, go ham with it. The player prefers to conserve their oil? Well they still get oil but their playstyle won't change because they don't get that much. Said out like this it seems like a system that punishes conservative players, but Frictional games had another trick up their sleeves back then. Noone really knew what the oil barrels did. It told us that it has some ammount of oil in them, that's seemingly random every playtrough. Honestly, back then I played the game so many times I thought the ammount of oil is tied to wether it's your first playtrough or not, until I read about it and realised I'm just good at reserving oil. Unfortunately, this revelation lead to breaking the immersion of the oil barrels, and now I broke it to you as well. Sorry.

Anyways, I like to use them more than oil potions. They are a lot harder to miss and I go the extra mile to make sure the player does not miss them by adding a small light source to it and placing them in very obvious locations. This way no matter what happens, I know that at that oil barrel, every player has roughly the same ammount of oil. This makes resource management a bit easier for me and less frustratig for the players.

Sorry if you expected a dev diary, and the next update is not one either if everything goes as planned, or at least not an update on a level. It's gonna be a teaser for the story ;) Stay tuned for that one!