Looking at the title you might be wondering, isn't the J-31 already in the game?

Well yes, but this report is to talk about how has been upgraded to be more accurate representation.

As it was been said before to the next update there as been a complete revision in almost everything to set up the final specs and missing details that were not in the current releases. This is an overwhelming task and most of details require a lot of time to be accomplished.

Well this is actually the main reason why there were able to be included in the release.

Part of that revision is the addition of the missing weapons bays on some models. One of those models was the J-31. To complete this aircraft I had to add new content and that was when I thought this content could be a good material to make an interesting report.

First let me start with the 310 Project.

It is a new model, besides the antena at the nose is the exact same model, I´ve even considered adding the dorsal airbrake like some initial speculations had, but in the end decided to keep it faithful to the real model. 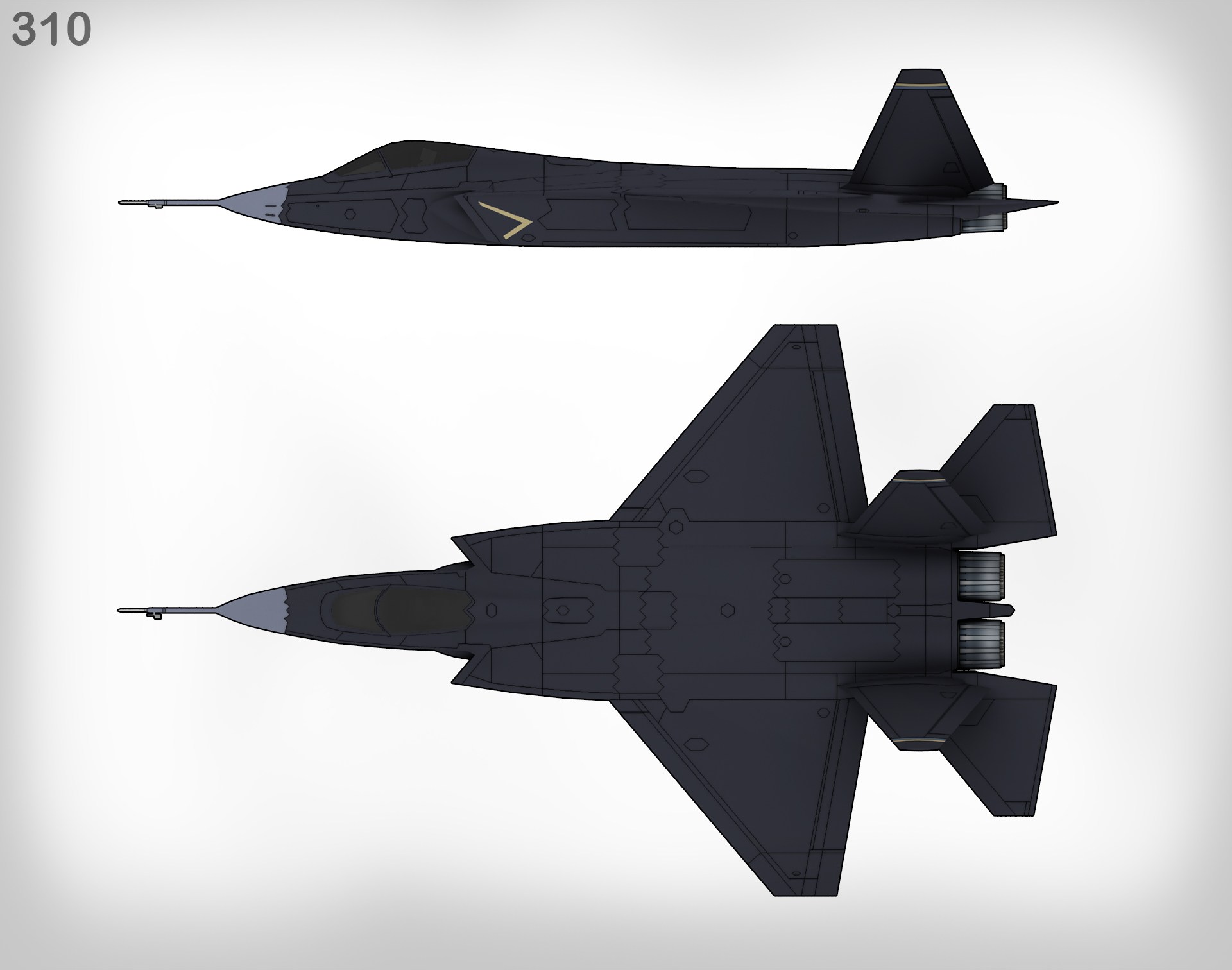 Other aircraft I want to show is the J-31.

It is already in the game, but I don't think it had this kind of reveal yet, so I'll use this opportunity to make it.

The J-31, is already in the game, but it was missing some details to be considered fully complete. 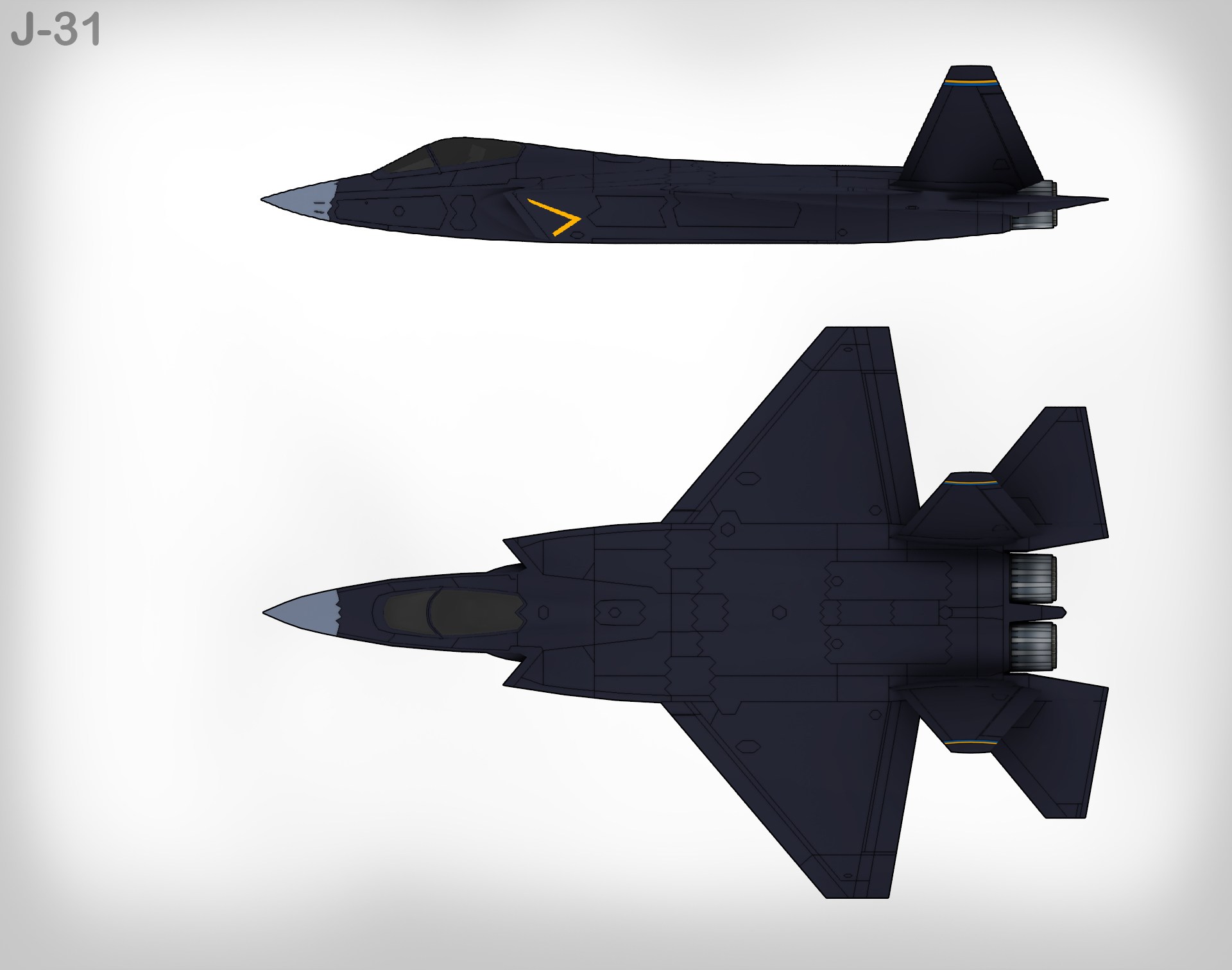 This is representation, it assumes this will be the final shape of the J-31, but I sure the final version that will enter in service will several differences.

And finally I added one last variant.

I usually like to have at least 3 variants per family, because this is the minimum number that the game requires to group them as a family in the hangar selection screen.

The variant I´ve added is the F-60

You may be thinking: "it looks the same!" It may look identical but it has several differences.

I will call this variant as F-60A, if I´am not mistaken this was the first mockup revealed for the F-60, 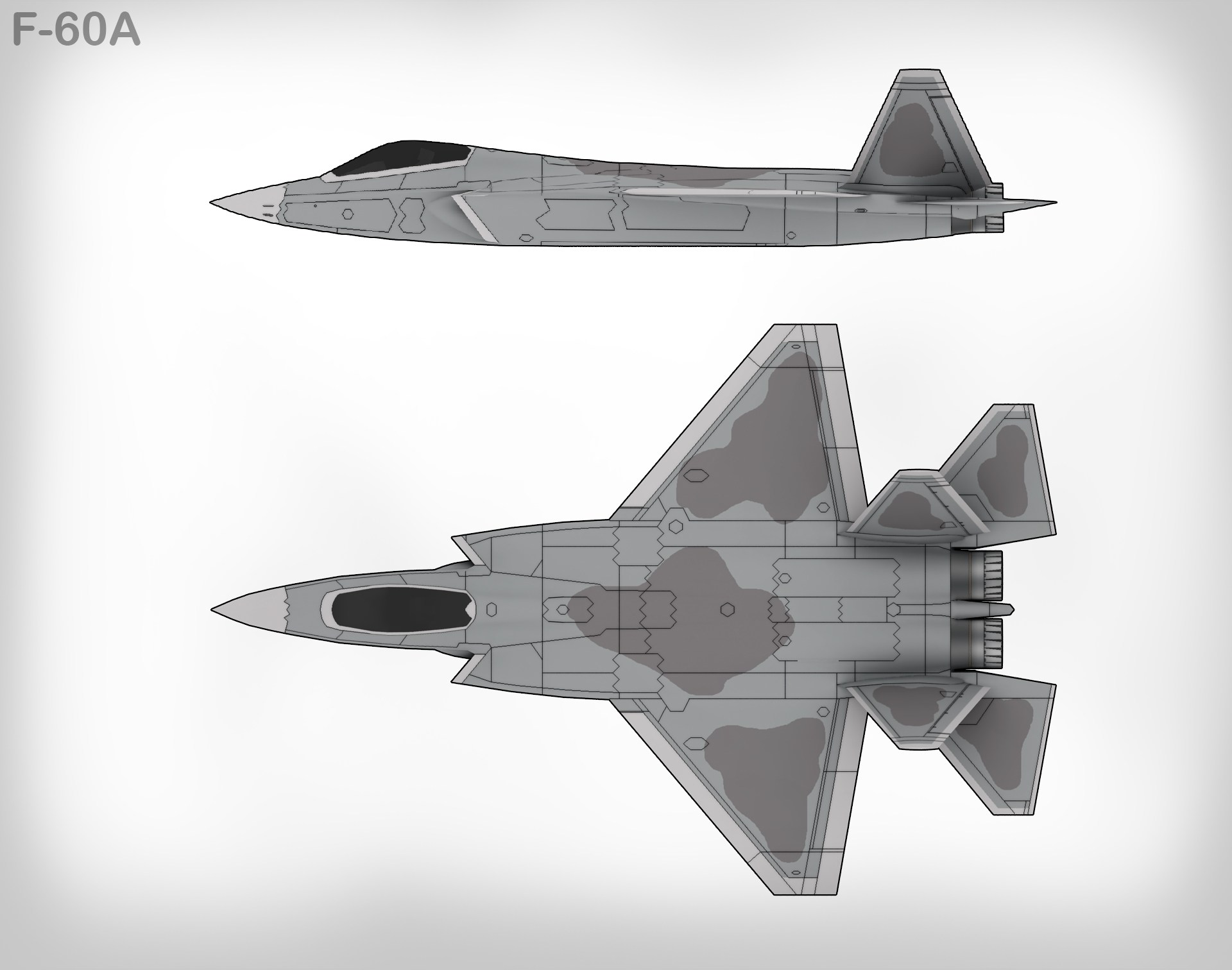 There is another F-60 mockup that was revealed later, the easiest way to distinguish both models is that the other mockup has dark grey trims and the F-60 revealed here has light grey trims, but the differences don't stop there.

That model will be referred as F-60B and like another model some of you may be wondering, the FC-31, both were omitted in this update. It is possible both will be added in other time, but not for now.

And what is really relevant in this report: the weapons bay! 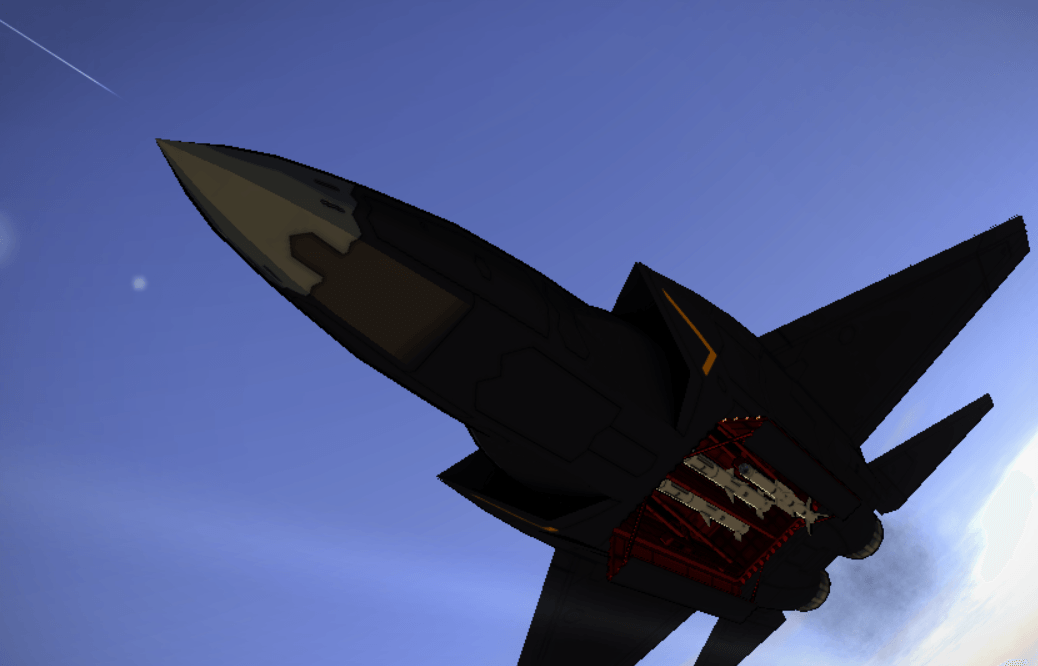 As for the current variants available in the game, all three will have the exact same weapons bay, it can only hold for 4 weapons and has to share the space the main and SP weapons at the same time.

While the weapons bays is a good addition to make the aircraft more complete, there was another problem, weapons. The J-31 didn't had the correct weapons in the game.

To correct that it was created a new set of weapons.

First it was the PL-10 family, this serves as main weapon, it was considered using the PL-9 but the PL-10 is really the most appropriate weapon. 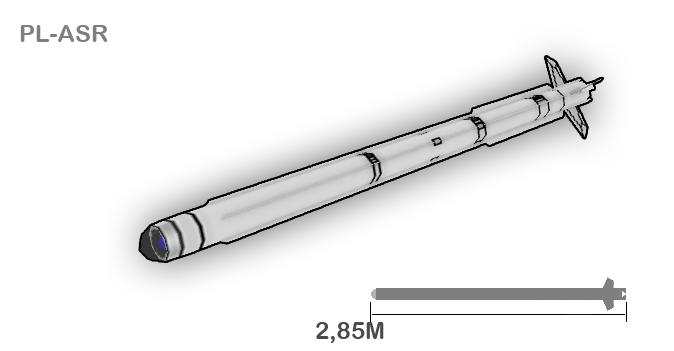 The prototype weapon for the PL-10 family, this model is very similar to the A-DARTER on first impression, but it has some differences on closer inspection.

The behaviour and role is very similar to the AIM-9X. 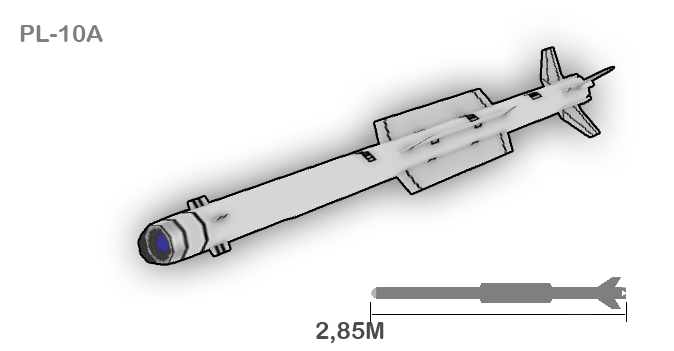 About the PL-10, there are two publicly known models, a one older and a newer model revealed in recent years. Too make it simple, as there isn't any known official distinction, the first model is considered the A version. 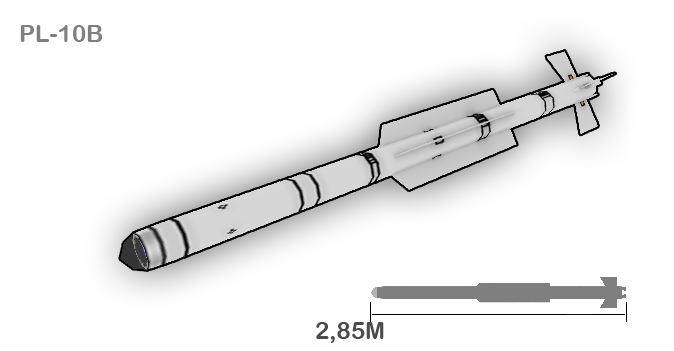 And this is the B model, the main distinction is the shape of the rear control surfaces.

But there was more that need to be added, PL-10 and the existing weapons was not sufficient to complete the loadout for the J-31.

The role and behavior of this weapon is similar to the R-77 or AIM-120. 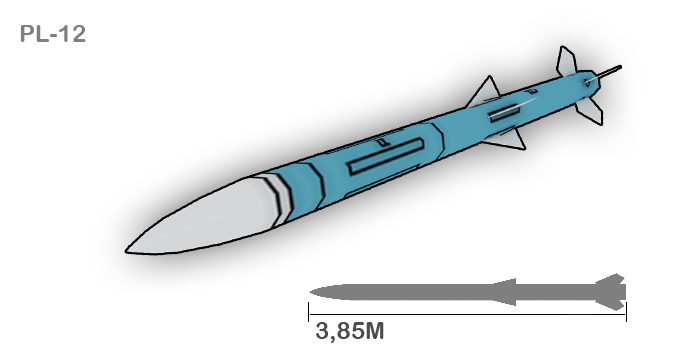 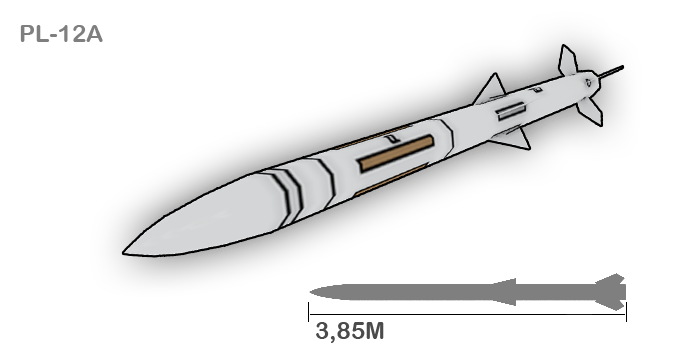 The PL-12A is an improvement over the PL-12 with more sophisticated fuse. 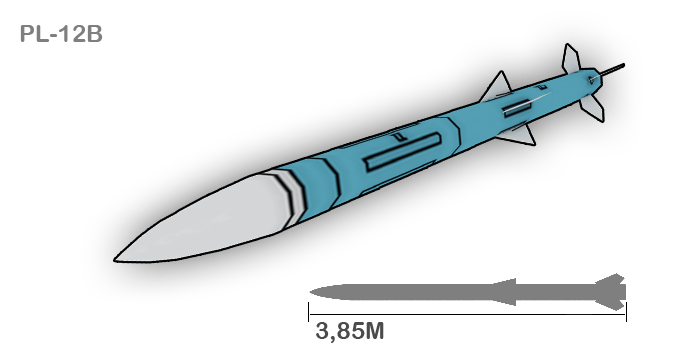 While other weapons were added this is the only variant that should be fitted inside the weapons bay. Only two can be added as the remaining slots will be used for the main weapon 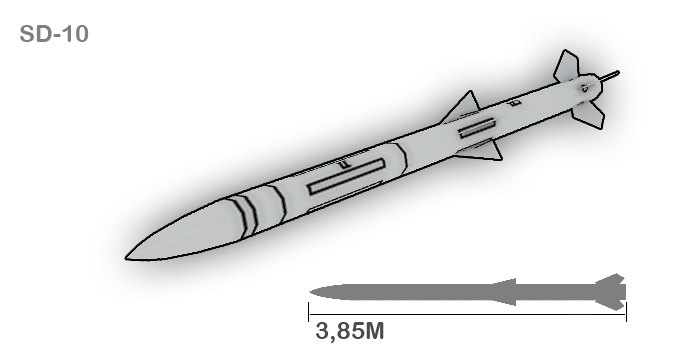 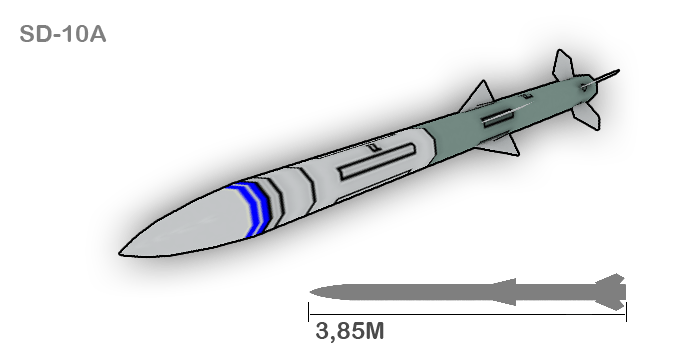 The was another weapon that felt that should be added, a guided bomb for more variant in the loadout. 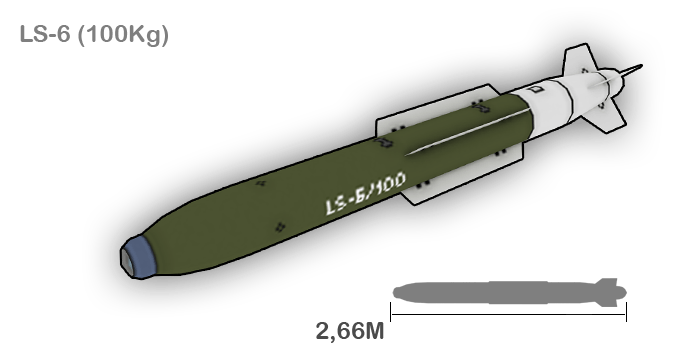 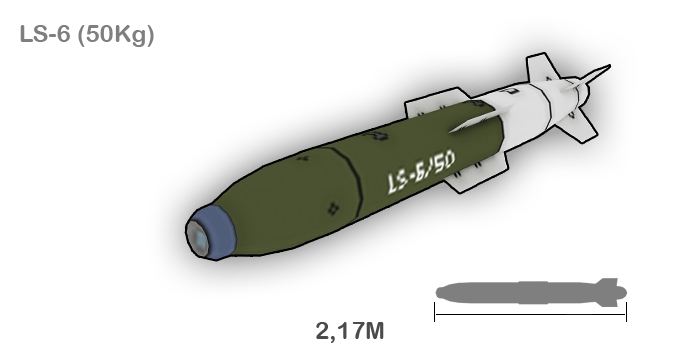 The LS-6 (50 kg) is a very small bomb, due to it size I believe it can be attached to each internal pylon

And that's it for now, I'm trying to keep these update small. but what do you think? do you want to see other reports about changes in other families?

Welp, there goes my efforts at making my own PL-10 and PL-12

Nice job BTW, can't wait for you to make the FC-31 (the mockup model shown during 2012's airshow)

Extra funfact: there's also an anti-radiation variant of PL-12, dubbed LD-10. Should be used for JF-17/FC-1 as well if there's any.
3.bp.blogspot.com

Is it just me or did you take inspiration for the F-60 from my mod I made a couple of months back or where you planing to add it for a while?

nah, it could be inspired from this
1.bp.blogspot.com

Still somewhat relevant, the final prototype J-20 is out
2.bp.blogspot.com

I know that :P

Mandatory question: J-20 when? With the said final prototype there should be 3 or more models exist already.

Definitely keep the other reports coming Time, it helps the community know that there is still active work being done on the game. Make sure to drop this on the steam forums too!

The weapons make me smile. This will let me touch-up the J-7 family as well.

And yes, I like these kind of reports since it lets me prepare for revising or creating new loadouts. Double that for knowing if new families are being released.

The hype is real, dem internal bays and chinese missiles/weapons(wonder what guns they used).

So I guess we will get a report every 2-3 weeks then?

"wonder what guns they used"

TS, at least one of the FC-31 variant should be made carrier capable, bonus point if there's navalized J-20 too.

Keep the reports coming, I love getting news on the game :)