When I started writing the post mortem for the original Face-Plant Adventures, it really was just about getting something done that had been long overdue. Some time after release, my brother (2D artist on the project) had started preparing a draft of an article on the art style of the game but for some reason never finished it. I took that draft as a basis for my post mortem but neither did I intend for it to get that extensive nor did I have any intention of working on the game itself again. But the more I thought about it, the more it saddened me that our game was gone for good after Microsoft had decided to close down the Xbox LIVE Indie Games channel on the Xbox 360 marketplace in 2017. We had never released the game to other platforms so it would be lost beyond recall.

Players can speedrun each level to obtain medals. Additionally, awardments (in-game achievements) can be unlocked by speedrunning specific sections of levels.

I decided that this was not a worthy fate for Florence Face-Plant and tried to figure out how much effort it would take to create a PC build of the game. Being a level and audio designer on the project but not a coder, I knew that some of the required adjustments would be tricky for me, and crash, the game's original coder, had long moved on and was not available anymore. But I knew that I would have to rectify at least some of the original game's flaws or else I wouldn't be happy with a PC release.

At first, I focused on reworking the visuals of all the levels by adding unused and some new assets such as new trees, a grass surface and clouds, adjusting the lighting and coloring (especially of the darker levels) and removing most of the annoying large patterns from the floor/wall tiles. The ghastly goo enemy also got pimped by adding an animated eye. 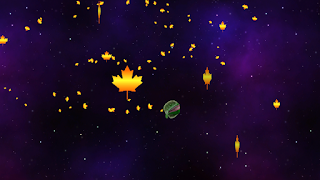 While I'm dreaming of a PC port, Florence's dream in the new intro sequence is dominated by golden leaves.

When things looked fine, I examined the intro sequence that I had started but never finished for the original game that would have provided some (if not much) context for the game's (admittedly not very deep and silly) story. To my surprise, I was able to make this intro work rather quickly and so moved on to also add an outro sequence to the last level, where players now get to see what Florence does with all the golden leaves they have acquired throughout the adventure. Finishing the outro took me a bit longer to get working, though, mostly because I feature creeped by deciding to implement two different endings. (*facepalm*) 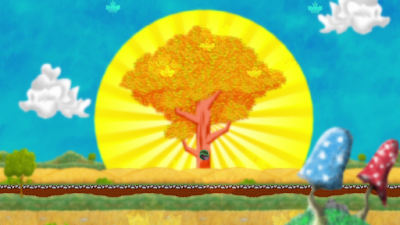 With story and visual improvements now in place, I could have been content but I just couldn't stop there. Over the past few years I've been working on and off on Project Plantylon, my sandbox project for several game dev ideas related to potential Face-Plant Adventures sequels. In this sandbox, I have already spent considerable time on improving the controls for Florence and now I wondered if they would work in the old game, too?

After applying the new control settings, I extensively tested all the levels again and made minor adjustments to level layouts where necessary. I found that for the most part there were no issues although Florence moves quite a bit quicker now and even the addition of a running skill required geometry changes only in a few places. Some more effort was put into enhancing the ceiling slide skill. In the original game, the ceiling slide lasted for a maximum of only 500ms and it didn't even have its own animation (Florence remained in the jumping animation for the duration of the ceiling slide). 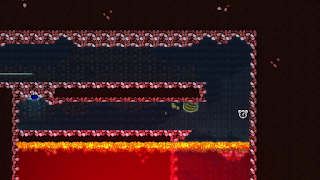 Florence now uses the suction of their enormous mouth to slide along ceilings.

Fortunately, I had already implemented a new animation to Project Plantylon that could be transferred to Replanted easily, but I also wanted to emphasize the skill more and thus increased its duration to a full second. It may not sound like much but it makes a big difference in how the ceiling slide feels and how it can be controlled. The original levels were not designed with such a strong ceiling slide in mind, so I added more slideable ceilings to the levels to take advantage of this enhancement. Many sections are definitely easier to overcome now with the new running and enhanced ceiling slide skills, but apart from a few exceptions generally the game can still be finished without being required to use them. I preferred giving players this additional skill set as an option rather than a requirement.

After figuring out how to deactivate the Windows Live Login, which was required for the original Xbox version but is not supported on PC anymore, I sent out a first master build to a bunch of trusted testers. Unfortunately, it turned out this build could not be tested beyond the fourth level due to a bug that affected only master builds. Luckily, I found a way to fix the issue without any code changes, but I had to ditch my plan of releasing the game on the same day in September like the original eight years ago. The new master build was handed out to more testers to speed up the process, which only lead to the contrary. Two of the testers reported a crash occurring right after starting up the game. I was devastated because initially, I was absolutely clueless as to why the game crashed on some machines but not on others and I feared I would not be able to release the game at all. Eventually (after spending a lot of time investigating), I stumbled upon the root cause of the issue and a simple workaround. Testing did not uncover any further bugs and so I finally and happily released the game into the wild.

Florence escapes the rising goo in less than 10 seconds (after a few failed attempts) and unlocks the "Up, up and away!" Awardment.

Was porting and partially remastering this old game worth it after all? Well, my primary goal was to preserve the game that would have been lost in limbo after XBLIG's shutdown, and ideally you'd want to preserve a version that is superior to the original, both of which was accomplished. The game looks and plays better than ever before and will always be available for PC now. I'm happy with the results of my work but I utterly fail at getting the game noticed. My social media presence is very weak because I can't find a balance between posting about a game and its development and actually working on the game, and the latter always has a higher priority for me, otherwise I won't ever get a project done. I'm really impressed by devs who make it look so easy to create awesome games while posting quality content about their work regularly. I don't know how to do it and don't think I ever will. Ultimately, this means that only very few people will play the game (not many have downloaded FPA Replanted as of this writing), and what good is a game that no one plays? But I don't fret too much about this because I've really enjoyed working on this project and having such creative output again, which is priceless to me. If anyone has suggestions or wants to share their thoughts and feelings on this matter, please leave a comment or get in touch on Twitter, would love to hear from fellow indie devs and content creators in general!

Download the Replanted Edition of Face-Plant Adventures from the files page and let me know what you think, any feedback is appreciated!