A major change to URR as we transition from worldbuilding into gameplay - the removal of the Encyclopedia.

Posted by UltimaRatioRegum on Sep 27th, 2015

Normal service will be resuming next week: I’ve moved house, settled in, and started planning out the final push on NPCs, which is to say tracking all the important NPCs as they move around the map – a process which has required me to do a lot of thinking about how to code it before actually getting started (this will turn into what it is effectively a Travelling Salesman problem where the time values at certain points are unknown, which I’ll write about here in the next few weeks). Anyway, here’s a post I wrote a little while ago with some of my thoughts on the future of the Encyclopedia; next week we’ll have an URRpdate as usual.

I’ve decided to remove the Encyclopedia from URR because I increasingly feel/fear it is going to end up doing the player’s “job” for them, and because my original conception of how the Encyclopedia is/was going to work is clearly going to be a programming nightmare.

Let me explain my logic. Right now, the Encyclopedia gives the player a full overview of everything in the world, though that’s only because the game is obviously not replete with gameplay as of yet. The intention was to – either this version, or more likely the version afterwards – fundamentally change the Encyclopedia so that it only starts off with information about your nation, religion, culture, histories, etc, whilst the others remain unknown. Then, each time you uncover a little nugget of information on your quest, the Encyclopedia would update itself. So when you first discovered the name of a nation, it would add in an entry for that nation, but all the information about that nation would be displayed as “????”s (or maybe just blank regions where text could be inserted) until you found those out, and then it would be added. Equally, were you to discover some piece of information that was meaningful, but you didn’t know which nation/religion/whatever it was associated with, there would perhaps be another list of entries in the Encyclopedia without names, noting that *some nation* somewhere has a given flag, but you don’t know which nation. When the player then encountered irrefutable evidence that Flag X belonged to Nation Y, the Encyclopedia would then “conflate” these two entries into a single entry, associating Flag X with Nation Y for ever more. 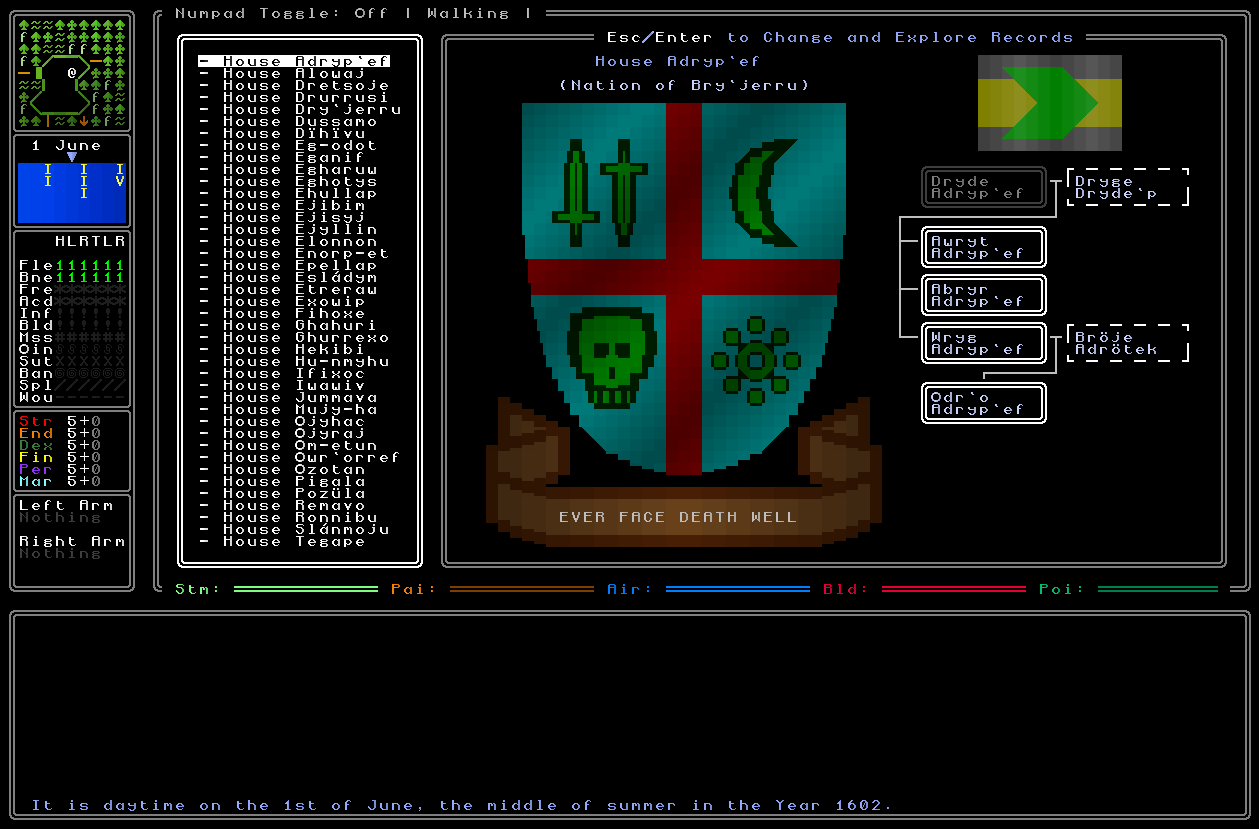 However, as in the first paragraph of this entry, I increasingly realize that there are some pretty major issue with this type of system. Firstly… surely this is doing the player’s job for them? Surely if the focus of the game is uncovering these cultures and how they interact and searching for the items you seek in the maze of heresies and histories and all the rest of it… surely we should be leaving these connections to the player, and getting the player to come to recognize the nations and cultures they encounter? I fear now that codifying this type of information in the Encyclopedia will run into several major issues. Firstly, it’ll “force” the player (or at least behaviourally strongly encourage) into constantly opening the Encyclopedia to check things, rather than remembering “ah yes, this is Nation X, I encountered some of their emissaries before”. Secondly, the player might not actually notice a useful bit of information, but if the Encyclopedia then updates, it tells the player that piece of information is useful! It seems to me this second one presents a major issue. Thirdly, there’s a question of what information the Encyclopedia should show. To stick with the nation example, should it show the national flag? The national dress? The national style of shoe? What vases in that nation look like? There has to be a line drawn somewhere, because if you want the Encyclopedia to potentially list everything about a given nation, you risk basically reproducing everything about that nation and leaving nothing in the actual game.

So, those are the gameplay issues. There is also a programming issue, which is that I increasingly realize this type of tracking – and perhaps most imporantly, getting the game to notice when a useful piece of information has been “seen” and then updating the appropriate Encyclopedia page – is (or would have been) a horrifying nightmare. This is a secondly concern to the gameplay, of course – if I still thought this was a good method I would certainly have done it – but it still matters somewhat. 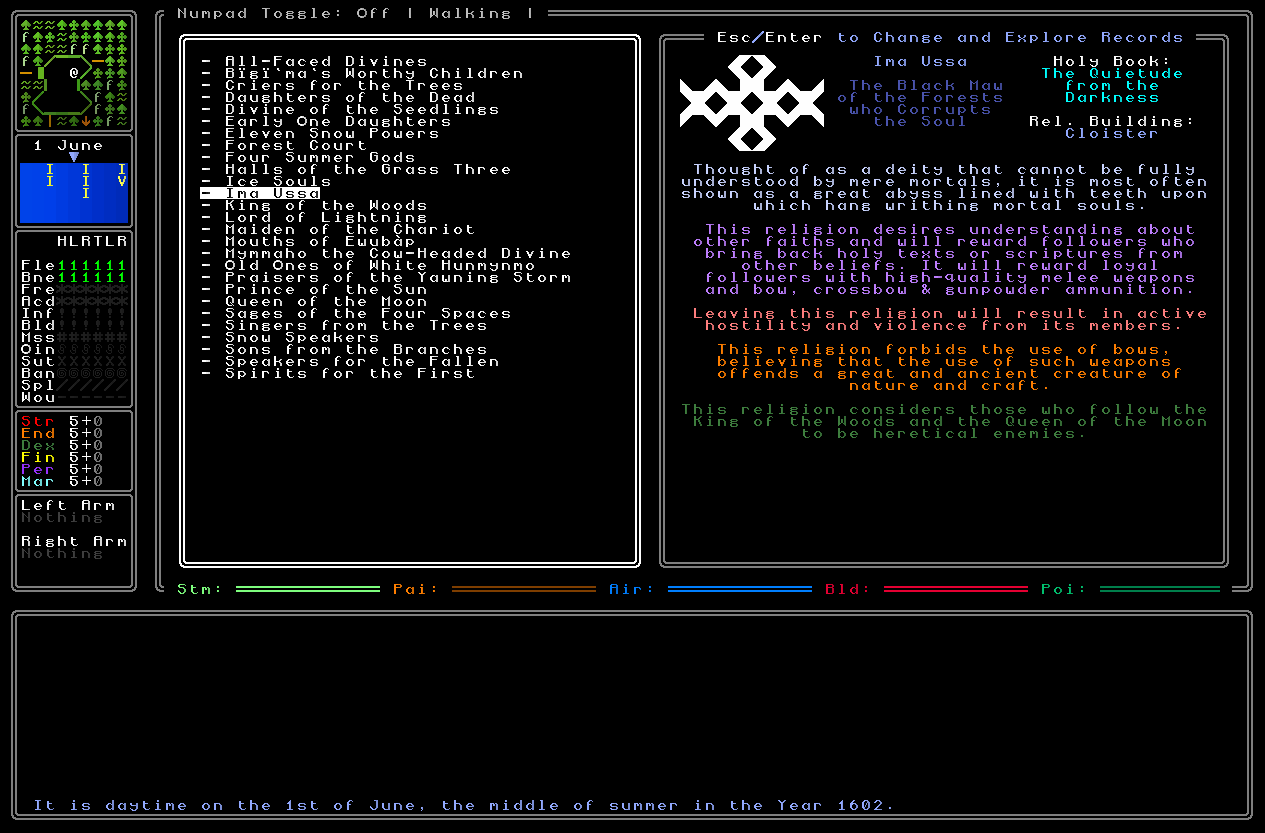 What’s the alternative? Well, I think I’ll keep the Encyclopedia in for 0.8 and probably 0.9. Whilst the world is “open”, I think it only enhances the game to be able to see everything at the start and give new players some impression of the size/scale/scope/variation of the planet and the variation of its cultures. However, a little further down the line – shall we say 0.10? – I’m now 99% sure that I’m going to remove it permanently, and rely two things. Firstly, the player’s ability to become familiar with the interconnected world they find themselves in; and secondly, crucially, an alternative to the Encyclopedia (maybe a “Journal” or something of that sort) which records every piece of information the player character sees/hears/experiences, but not the significance of it. With this model you can once more view/read everything of note you have ever looked at/seen, but it doesn’t tell you *what does/does matter.* So once you’ve read a book, you can forever “look up” the information in that book (so it basically as if the player character has an eidetic memory). Therefore, this will be a replacement Encyclopedia where you browse “books”, “clothes”, “paintings”, and the like, but you do not browse information about “nations”, “religions”, “cultures”, since that’s what you’re piecing together. Equally, I'll also work on a system whereby the player can "tag" certain items in their viewed history as things they think are relating to a particular riddle, and then browse according to tags and assess the data they have and what else might fit into that category.

Therefore: the Encyclopedia will survive 0.8 and 0.9, and then be replaced by this new version which records player character experience but leaves understanding up to the player – which is surely the whole point of the idea of the game and the riddle(s) hidden across the world’s cultures! For now, however, the Encyclopedia will remain to assist players as we go through the worldbuilding -> gameplay transition in looking around the world, getting some grasp on its detail/complexity, etc. See you all next week for the resumption of normal service!

I do like the idea of player-driven tagging of potentially important information. It would be good if the player could do tagging the moment they observe something as well as within the new encyclopedia. Also a 'recently observed' section in the encyclopedia would be nice.

Some automatic tagging might be worthwhile too. E.g.: the region or dungeon in which you discovered a book, or the fact it's a recipe book.

In a previous article you talk about how using disguises would probably be the best way to encounter as much of the world as possible. If that's the case, your knowledge of disguises should at least be explained in the player character's past, and you'll have to treat the mechanic as a key pillar of gameplay. Whatever others may say, you can't really experience Skyrim without 1) fighting and 2) lockpicks. Bethesda failed to make lockpicking engaging because they didn't realize locking important loot in chests would accentuate that part of gameplay.

Excellent, glad you like it. Recently observed makes sense too, I'll definitely include that. Yeah, automatic tagging will take place for the general category ("Altar", "Statue") and everything else is up to the player. Intriguing point about knowledge of disguises and player history. Hmm... I'll think that one over. I have a particular shape in my head for the presentation for the player character but that would definitely fit within it. I'll ponder!

this wouldclose the doors for players focused in casual exploring, because the would have to write down every bit of info so they wont forget, i usually have to search in lore to no get lost, even in the elders scrolls series where the lore its everywhere and NPCs talks about it in he game, now imagine in a text based game where you now have to remember everything... you need to implement some sort of journal like pages where some info about X nation is displayed as you read books and talks with people.

This would give the player also many ways of finding info, though this would have some problems with realism part of the game, as many NPCs would have wrong info, based mainly in their jobs, (a smith will know how much cost a iron ingot from X country but it wont know how much cost a grain bag from the same country) or as in a facist country where almost nobody would know some historical facts of the governement, wich you then have to find them in prohibited/secret books.

this would be done with some sort of tag system where certain info trigers an update in your diary/journal where you can read in your home/hotel/motel/owned house in another country :D

I don't think that's necessarily a bad thing if it becomes a bit less casual - I do have a complex and challenging non-sandbox game in mind, after all. as you say, it would give yo a huge number of ways to gain info, but a good point about false information. How does this get added into the journal? A tough question, and... I'm not sure. I think it would get included anyway but you can readily tag it as something you suspect as being false.