Post news RSS Release v0.2.3-alpha of RPG in a Box

Release v0.2.3-alpha of RPG in a Box is now available! Most of the new features in this release are related to shading and shadows. Continue reading for details on what is new!

Firstly, apologies for the delay in getting this update posted! I will admit that I spent most of the weekend (and Monday evening) playing the DOOM Closed Beta, so I am running a bit behind my usual schedule. For the v0.2.x releases, I have been focusing (mostly) on polishing and enhancing existing features rather than adding entirely new features. In the next few releases I will also be trying to improve the usability and overall user experience. There probably won't be as many interesting additions until v0.3 (when the Visual Script Editor is planned), so please bear with me!

Most of the new features in this release are related to shading and shadows. Read below for details on what is new!

One of the main new features in this release is the new "Shading" option available in the Voxel Editor. There are currently two shading techniques available to choose from: Flat and Ambient Occlusion. Flat is the original look where there is not any special shading done to the textures, so all surfaces appear as solid colors. Ambient Occlusion bakes an ambient occlusion effect onto the model's texture to create the appearance of shadows on the inside corners of the mesh. While I still have some tweaking and optimization to do behind the scenes for the Ambient Occlusion option, I think it's a good start for supporting a fancier visual look. :) As a note, it appears that if you convert a large amount of your models to use the new shading technique, the application may become a bit unstable. So far, I've only seen it affect the importing of MagicaVoxel files, but you can workaround this for now by importing them into a separate empty game project and then copying the .scn files into your game project folder manually. I am diligently working to get this resolved, though!

Below are some screenshots demonstrating the new Ambient Occlusion shading. Credit goes to IndieDB user ilbarbudo for the first two images as they are captured from one of his test maps for a project he is currently working on. 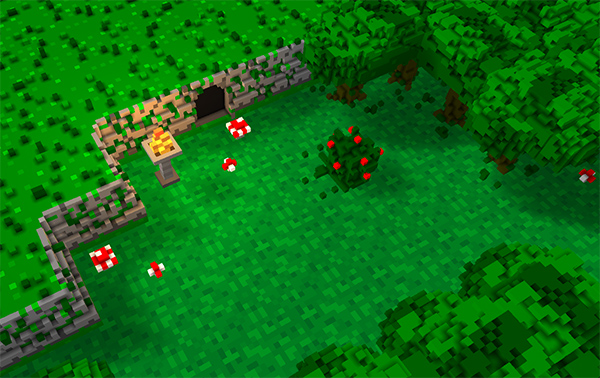 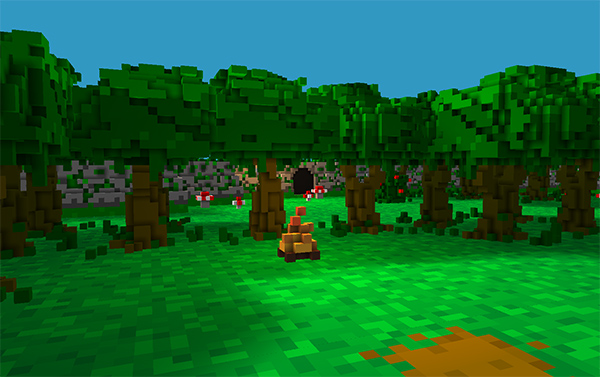 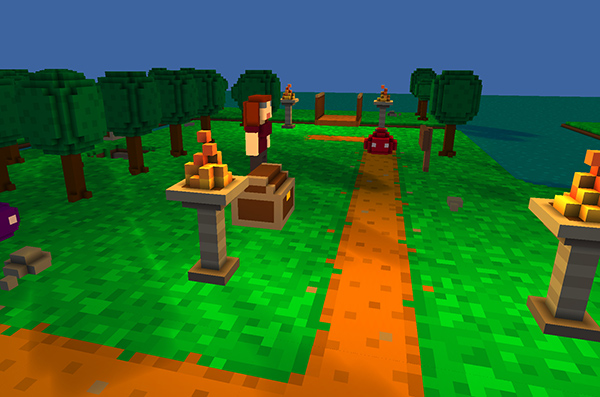 This option is set on a per model basis, so you can mix and match different shading styles across your collection of voxel models, if so desired. In order to apply a different shading technique to a model, open the model in the Voxel Editor and locate the Shading property in the Properties panel. Select the desired type from the dropdown and then save the model. The model will now appear with the updated shading style in-game and in the Map Editor.

There are four new properties relating to shadows that are now available for modification: horizontal and vertical angle of the directional light, darkness of shadows, and blur amount of shadows. All of these properties can be edited on a per map basis from the Properties panel and are located under the Directional Light section. 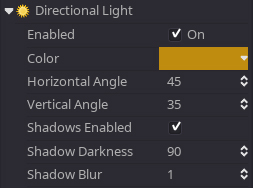 Horizontal Angle: The horizontal angle of the directional light determines which direction the sun is coming from and is specified in degrees, with a range of 0 to 360.

Vertical Angle: The vertical angle of the directional light determines how high the sun is in the sky (i.e. the time of day), and therefore affects the lengths of the shadows. The value is specified in degrees, with a range of 0 to 180, where 90 is equivalent to the sun being directly above (i.e. noon).

Shadow Darkness: This value is specified as a percentage from 0 to 100 and determines how dark the shadows appear, with 0 being the lightest and 100 being the darkest.

Shadow Blur: This value determines the blur amount applied to shadows, with a range of 0 to 4.

Another change worth mentioning is the addition of the "N" shortcut key in the Map Editor. This is a shortcut that should make modifications to navigation/interaction paths quicker and easier. While in edit mode, once you select two adjacent tiles, you can press the "N" key to toggle through the four types (Walk & Interact, Walk Only, Interact Only, and None) instead of using the right-click context menu. This will hopefully make the editing process a bit less tedious!

That sums up the majority of the changes included in RPG in a Box v0.2.3-alpha. Thanks for reading and your interest in this project! I still hope to do another release this weekend even though this one was a bit late, but if so it will most likely be a small one. If I am able to resolve the instability of the MagicaVoxel import, I will definitely go ahead and push a patch out for that. Thanks again for your support!