Post news RSS Release v0.2-alpha of RPG in a Box

The main new feature in RPG in a Box v0.2-alpha is the visual dialogue editor. This new dialogue editor replaces the original and uses a node-based system to allow for easier creation of dialogue. It's a bit rough at this point, but the basics should work and I'll be improving and expanding upon it in upcoming releases. The new editor is not backwards compatible with older dialogue files, so unfortunately you will need to re-create any dialogue that has been made with previous versions. This weekend I plan to create a tutorial for setting up a basic conversation with an NPC, so keep an eye out for that!

A few improvements have been made to the model previews contained in the resource selection sidebar. If a tile or object has a "default" animation (or "walk" animation for characters) that animation will be played upon selection. In addition, each preview now has a text label at the bottom so you don't have to rely on tooltips to determine the name of the resource, and the previews in general should give a better view of models, especially those that are particularly tall.

Another new feature in this release is the developer console to aid in testing/debugging your game. If you go into your game configuration, you can enable this by checking Developer Console under the General section. 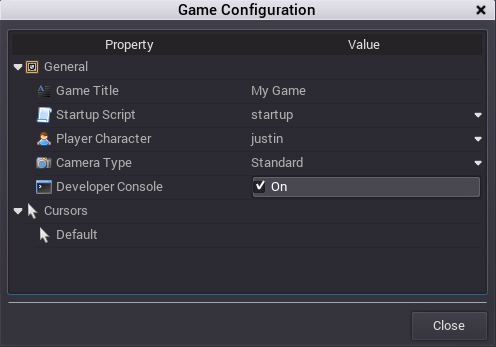 When enabled, press the tilde/left quote key (~/`) to display the developer console. You can type in a scripting command in this box and press Enter to execute the command.

Importing into the Voxel Editor from a PNG image is now supported. This is done via the Import button (which is also used to import MagicaVoxel .vox files). The initial implementation simply loads the image facing towards the front, but further customization will be added in future releases.

Thanks for reading, and I hope you enjoy the latest release of RPG in a Box!