Dust v0.1.2 is now available. This release introduces a few new items, makes the character control easier, and fixes a couple of bugs. 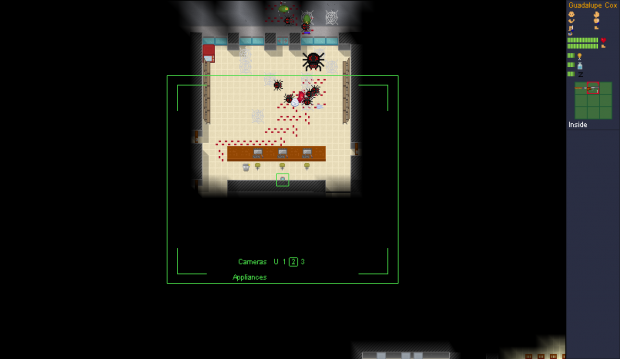 Example of CCTV in a police station.

- Aiming controls are set from the point of view of the camera when throwing an object (and not from the point of view of the character).
- Propose to drop the item in hand on the floor when equipping an item and the currently equipped item does not fit in the inventory.
- Rebalance poison, fire, hunger and thirst damages.
- Rebalance sleep and healing. Healing only happen when sleeping.
- Optimize game code.
- Towels can be cut in rags.
- Soap poisons slugs.
- Update melee and ranged combat controls: Freeze direction while loading and unloading a blow. Faster blow release. Animation showing the range.
- New items: smoke bombs, broom, spear, camera consoles, remote camera, smoke gas.
- Gas blocks view.
- Show controller selection menu the first time the game runs.
- Holding a control is equivalent to repeatedly pressing it in the menus.
- Chat / console is triggered by the “delete” button (so “return” can be used to navigate menus).
- Explains why an item cannot be stored in the inventory (e.g. item to heavy).
- Failing to light-up a torch does not close the inventory.
- Can read books and consume items directly, without having to have it in the inventory.
- Show remaining charge of an item in the favorite bar (e.g. battery, torch charge, liquid, bullets).
- Throwing a lighted-up torch sets what it touches on fire (useful for spider webs).
- Enable the selection of controller every time the game starts.
- Instruction screen on the difference between using an item and interacting with the environment.
- Set the auto-aiming default button on the left trigger of the xbox controller.
- Display xbox button icons in the tutorial instructions when using a joystick.
- Make dummies destructible.

- The character keeps moving when pressing and releasing of both left and right controls (on a keyboard).
- Player can skip introduction with joystick.
- Characters don’t spawn in water.
- Character don’t spawn surrounded by enemies.
- Inventory menu don’t get stuck when the player drop the last equipped item.
- The character don’t keep on charging a blow when opening and closing inventory.
- Fix display damage bar of walls when surrounded by non visible blocks.
- Mouse work game menu.
- Can generate survivor groups with multiple members.
- Lone survivor can have keys.
- Tutorial don’t hide the inventory.